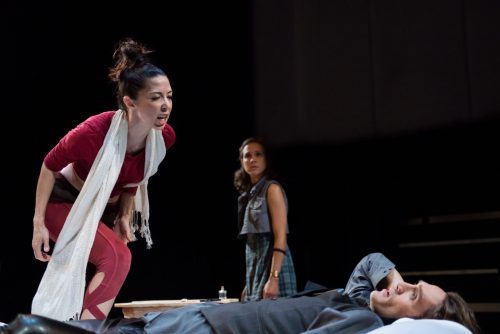 Can there be anything in the world more annoying than late arrivals?  You know the ones – harried, apologetic, sitting right in front of you and so-o-o-o-o self-obsessed?  And do they ever remember to turn off their cellphones?  Hell no; so of course it goes off, and of course they have to answer, oblivious to their many new “friends” who are now held captive to their latest domestic drama.

…a finely crafted piece with a truly stunning actress at its center, not to be missed.

And yet – and yet, as Allison Gregory shows so brilliantly in Not Medea, a meditation on family and tragedies ancient and modern, it is often the most obnoxious, high-maintenance people who feel the most.  With humor, irony and deep sympathy, Gregory gives us a vivid tour of the broken psyche of a woman still in grief for a lost child, a woman who in her grief is still drawn to the spectacle of Greek Tragedy.  Why, we’re not exactly sure at first; the Woman (that’s her name, just – Woman) openly questions our sanity for even showing up to watch a tragedy which, at first, seems as remote from our lives as the 25 centuries that separate it from our own.  Still the relevance of Medea to Woman’s own story becomes painfully clear before too long.

Gregory has a genius for working an audience gradually, inexorably, into the beating heart of Greek mythology—only to turn it to laughter with a simple aside, and bring the present into sharp focus through that mythological lens.  One minute we watch as Jason and Medea first meet on those mythological shores of the Black Sea; having assumed the role of Medea in this scene, Woman simply turns her head and with a simple change in tone does a jump-cut, telling us how easily her own husband seduced her.  Present and past, mythology and reality meet in the same space, the same person, with the same sense of pathos and impending doom.  And Gregory skillfully guides us to the ultimate revelation of why Woman feels such a kinship to Medea, evoking that classic combination of pity and fear that the old Greeks tell us is the essence of great drama.

As Woman, Joey Parsons is absolutely riveting; she charms the audience from the moment she enters, flustered and apologetic, fumbling for the phone; her ability to command the audience’s attention throughout, including a crucial juncture when she asks us to actually turn on our phones, enables us to have a communal experience that is as rare as it is wonderful.  Parsons is vivid and passionate, as both the harried single mom whose kid can’t let her go to the theatre even for one night and the tragic heroine Medea, who shares Woman’s tragic misjudgment of men.  Ben Chase is perfectly cast as the hunky, slightly dim but devastatingly ambitious Jason, all tall dark and handsome, who—like all too many men, then as now—can’t understand why a woman can’t share the bed with someone else for a change. As the Chorus, Rachael Balcanoff charms us as the witness to both the tragic action and the awkward code-switching of her Medea (who, from the Chorus’s perspective, should really just stick to the Greek character).

Jesse Dreikosen’s deceptively simple set, a parquet wood floor, bed and small stone-lined pool of water provide all the symbolic elements necessary for tragedies domestic and royal, ancient and modern.  The presence of water, discreet but powerful, is perhaps one of the most memorable visual elements of this production.  And John Ambrosone’s lights, with the assistance of Christian Specht, guide us through the lightning-fast changes of mood, change and time frame with great ease.  David Remedios’ string-tinged sound design underpins the action as discreetly as it is effective, and Peggy McKowen’s costume design combines the ancient vs. modern sensibility, from Medea’s “wedding veil” to Jason’s leather pants and football pads.

Watching Not Medea can be exhilarating, but it might be a bit confusing for some; although Woman has the ability to switch back and forth from the Classical to the modern worlds, Jason remains stuck in the past (his modish costume notwithstanding).  It is true that both ‘Jasons’ are cads, but it might have been helpful to put some flesh to the modern edition, to clarify his actions and the relationship that Woman is struggling to put behind her.  By and large, however, this is a finely crafted piece with a truly stunning actress at its center, not to be missed.

Running Time:   90 minutes with no intermission.