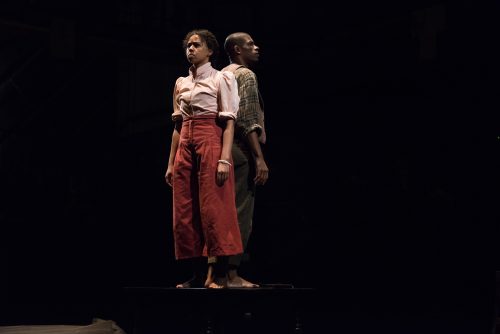 When we last caught Christina Anderson two years ago she was solidly in the present, examining the complex psychology of the neglected and dispossessed in the American Northwest with her play The Ashes Under Gait City.  Her interest in group dynamics and the perils of hierarchy are fully engaged again in her latest play pen/man/ship, a masterpiece of period drama and another sobering reflection on how easily communities can devolve into mutual distrust and self-hatred.

…I have never been so thoroughly immersed…in the action as I was here.

The time is 1896, the year of the notorious Plessy vs. Ferguson decision by the Supreme Court, ruling that the bigoted Jim Crow “separate but equal” laws were constitutional.  The place, a ship sailing from the USA to Liberia.  Its African-American crew is under the leadership of Charles Boyd (the magisterial Brian D. Coats), a black surveyor who has been sent on a project that is a closely-held secret.  As a land-lubber, he relies on a ship’s captain to actually pilot the ship while his son Jacob (the sympathetic Damian Thompson), tries to keep the old man on a even keel—a project in its own right, given Charles’ love of gin.  A ship’s mate Cecil (Edward O’Blenis, in a sympathetic turn), plies his “squeeze box” much to Charles’ distress, but proves to be a patient companion as Charles’ fortunes turn dark.

The play unfolds initially as a series of journal entries while at sea, Charles’ notes made around the time of the Sabbath when he conducts private prayer meetings below deck in his compartment.  But his son Jacob has introduced a potentially destabilizing presence onboard, his companion Ruby (the stunning Margaret Ivey), a refugee from the South and a woman whose formidable intellect clearly outshines everyone else’s.  She will have nothing of the Bible, or at least of the Bible as written—she deliberately re-phrases it, and openly rejects Christianity as the faith of her oppressors.

As radical as Ruby might be in her attitudes, she has an easy rapport with the crew and gains their trust—something Charles, an educated black man, refuses to do.  His contempt for the working poor on his own ship does not bode well, and as the discontent grows it falls to Ruby to mediate and guide the disputes to follow.  Anderson’s evocation of time at sea, and the gradual devolution of this ship’s fortunes, is truly remarkable.

What makes the journey of this production all the more memorable is Kris Stone’s set—a vast pool of water surrounded by wooden decking, with a symbolic sail suspended over the entire space.  The actors perform barefoot in this ankle-deep sea, introducing a tactile dimension to the action.  And the dynamics of the sail overhead—in fair and foul weather—coupled with Victoria Deiorio’s ingenious sound design create an overwhelming sensory experience.

I have seen productions of seafaring tales, and I’ve seen various techniques used to evoke the water, but I have never been so thoroughly immersed (pun intended) in the action as I was here.  Tony Galaska’s lighting, again, is uniquely well suited to the contrast between indoor and outdoor action; one minute we’re above deck on a sunny day, the next we’re in the dank and dark of Charles’ quarters, with the sense of impending doom all around.  Aaron Anderson’s fight direction is solid, and Trevor Bowen’s costumes are as evocative as all of the other design elements here.

Director Lucie Tiberghien has established a solid reputation with her work here at the Contemporary American Theater Festival, and her feel for Anderson’s work is especially keen.  I can’t wait to see what the two of them do next, preferably as a team.