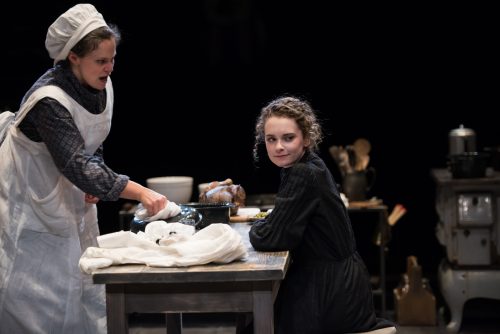 Few classics of the American stage loom quite as large as A Long Day’s Journey into Night, Eugene O’Neill’s autobiographical account of a theatrical family, of means, plagued by the darkness of his age.  The “Tyrone” (O’Neill) family is indelibly etched into the collective memory of theatre audiences everywhere, and a who’s who of the American and British stage have coveted the roles in this play.

The fame of the house and what went on “upstairs” (or, more accurately, down the hall?) is all the more reason to revisit the Monte Cristo Cottage, the O’Neill family’s summer home in Connecticut, now a National Historic Landmark, where the action of Long Day’s Journey takes place.  And with The Second Girl, Irish-American Playwright Ronan Noone offers us a fascinating new perspective:  what if, Noone muses, we had a glimpse of the cramped kitchen quarters in that Cottage?  What if we cared as much for the challenges of the O’Neill family’s humble Irish-immigrant cooks as we did for their famous employers?

Noone sets the action of The Second Girl in the tight confines of the Monte Christo Cottage kitchen where Bridget Conroy laboriously starts her day stoking the coal stove and whipping up some eggs, bacon and coffee for the household.  A Madonna statuette stands on a side table, right above the drawer where she keeps her liquor (it’s 1912, and so it’s still legal even if not completely advisable).  She has been joined by her niece Cathleen Mullin, who has come to America in hopes of earning a little money before she returns to Ireland to marry her sweet-heart.  Her own journey was not without tragedy, however, so it is not as if she is just another wide-eyed innocent abroad.

Bridget’s difficult past, present in her stony resolve to focus on her work, is contrasted by Cathleen’s burning ambition and innate talent for flirtation.  The master of the house is a famous star of the American stage (the cottage’s nickname comes from James O’Neill’s greatest role, Dumas’ “The Count of Monte Cristo”).  We are treated to hilarious demonstrations of turn-of-the-century declamation, with Cathleen giving forceful renditions of The Tempest’s Miranda, which Bridget scarcely tolerates but which apparently brings tears of appreciation from their boss (who remains offstage, thankfully).

The ‘fly in the ointment’ here comes in the form of Jack Smythe, the family driver and mechanic; American through and through, and constantly trying to wrangle a kiss out of Bridget, he finds excuses to barge in, eat the leftovers as well as his own share, and talk about his brother in San Francisco.  Jack like Bridget has his own skeletons in the closet, and is determined to break from his past with her by his side.

Eugene O’Neill, himself a part of the early-20th century Avant Garde, became famous for plays featuring extreme characters in extreme situations.  His career ended around the time that Arthur Miller’s began, with Miller’s emphasis on the potential for a uniquely American, domestic form of tragedy.  Some generations on, Noone’s response is to remind us of the extremities found in everyday life, the tragedies that can occur to anyone, anywhere.  Irish playwrights, both here and in the home country, seem to have a special gift for naturalistic dialogue, and it is especially affecting here as Noone contemplates what is lost when people venture into the New World to make their fortune.  The desperation with which Cathleen clutches a letter from home, putting it to her nose to smell the turf fire where her boyfriend sat to write, to smell the seaside where she grew up, reminds us of the visceral if fading connections so many of us have to our roots.

Director Ed Herendeen has created a production that is constantly in motion, and it is easy to follow the rhythms of a typical 24-hour period at the O’Neill household.  Jessica Wortham burns with a subtle fire as Bridget, and Ted Koch as Jack is every inch the American guy—typical, and in that way exceptional.  Cathryn Wake, meanwhile, has entirely too much fun as the scenery-chewing Cathleen, with stentorian deliveries of Shakespeare that seem taken right off the old 78’s.  And yet it is the joyfulness of her ambition which renders Cathleen’s later reversal of fortune all the more affecting, and Wake keeps you riveted as she contemplates what she has lost.

Victoria Deiorio provides a wonderfully subtle soundscape, from snatches of folk music to the discreet tick-tock of the grandfather clock down the hall, and Therese Bruck’s costumes are a fine evocation of the period.  The only false note here is the decision by Kris Stone to leave portions of his set from pen/man/ship, the other show currently playing in repertory in the same Marinoff Theater space, in plain view.  The ubiquity of water which served the production of Christina Anderson’s play so well is distracting here; yes, the cottage is on the water but no, seeing water under a kitchen floor, water which has little to do with the action in The Second Girl, is a needless distraction.  Covering it would go a long way towards restoring the environmental integrity of Noone’s play.