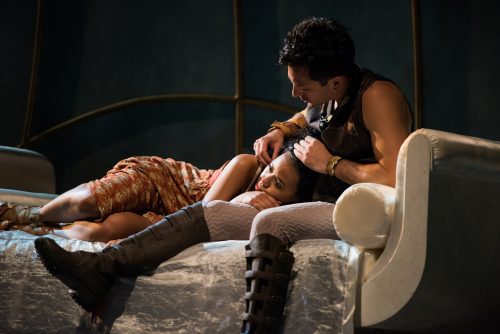 One of the attractions of the Contemporary American Theater Festival is Artistic Director Ed Herendeen’s willingness to challenge his audiences with audacious work that takes you right up to, and then over the edge.  The results can be exhilarating, hilarious, confusing and frustrating, but thought-provoking in ways that grow on you with time.  And his partnership with New York playwright Chisa Hutchinson is a case-in-point:  with her latest work, The Wedding Gift, Hutchinson establishes herself as an artist of great promise who clearly relishes the chance to be misunderstood—and I mean literally, misunderstood.  Because the language used through much of this play is utterly foreign, a pseudo-Indo-European dialect developed by a black ruling class at some vague point in our planet’s future.

The gauntlet is thrown; it is for you, dear reader, to take it up and see Chisa Hutchinson’s latest.

The show opens with an elaborate marriage rite between African royalty—expertly guided by director May Adrales—whose procedure relies as much on Peggy McKowen’s brilliant, fantastical costumes as it does on gesture and language.  At the conclusion of the ritual we have the traditional presentation of wedding gifts to the royal bride and groom, when we are confronted with the pièce de résistance:  a white slave, Doug, trapped in a cage and dressed in little more than a loin cloth.  Surrounded by total strangers, Doug desperately tries to communicate his desire for freedom; his pleas fall on uncomprehending ears.

Hutchinson goes well beyond a racially-reversed slavery narrative here; she is ultimately more interested in how we break through the barriers of misunderstanding, how we learn—by fits and starts—the value of empathy and truthfulness, even when that truth hurts.

What balances this grim scenario is Hutchinson’s wonderfully irreverent, visual sense of humor:  as soon as Doug is shown to his cell and chained to the floor we are treated to a slapstick ‘desperate escape’ routine, featuring hilariously incongruous props and devices (David M. Barber, like McKowen, had entirely too much fun here).  And this is where I must say that Jason Babinksy’s performance as Doug is as physically brilliant as it is emotionally compelling; it’s one thing to play persecution and despair, it’s another to whack away at one’s chains only to discover you’re wielding a huge sex toy by mistake.  (Just sayin’).  When he is forced to strip and endure the royal equivalent of a bath we do get an eyeful, but keep in mind that for Hutchinson nakedness is a reminder of our vulnerability, our humanity.  This isn’t about eye-candy, in other words, it’s about an average guy who is humiliated, and who is desperate to regain his dignity (a copious, nicely-proportioned towel is the solution here).

One of the great things about a repertory theatre season is the chance to see fine actors in diverse roles:  Margaret Ivey, whose performance as Ruby in pen/man/ship is so memorable, has another star turn here as the princess-bride Nahlis.  Doug is her wedding gift, and the halting, pothole-strewn development of Nahlis’ relationship with Doug, blossoming into romance and genuine friendship, is one of the joys of the show.  As her husband Beshrum, Damian Thompason (Jacob in pen/man/ship) exudes the pride and arrogance of a boy “to the manner born.”  Nafeesa Monroe, meanwhile, lights up the stage as Onjah, Nahlis’ lady-in-waiting, whose ability to speak English as well as the royal language hints at later tensions to come.

It is the nature of Nahlis’ relationship with Onjah, revealed in the royal dialect and hence one that the audience is asked to receive viscerally and not orally, that lies at the heart of the play’s action.  With Onjah’s departure from the stage, Princess Nahlis requires a new translator—and here is where Edward O’Blenis gets to show off his comic chops as a courtier who clearly thinks English is vulgar, emitting it in spurts like bits of rotten apple.

Barber’s futuristic, sinuous set is Spartan enough, with Hannah Marsh’s projections creating an unexpectedly lush setting for the play’s denouement.  Nathan A. Roberts and Charles Coes collaborate on a sonic atmosphere that is at once a touch of sci-fi, and a touch Versailles.  D. M. Wood’s lights, meanwhile, are able to create the cold, antiseptic atmosphere of a palace complex at once foreign and, ultimately, familiar.

The Wedding Gift is demanding of audiences accustomed to plain speech, or at least to subtitles.  But part of the point here is that we are forced to experience what it is like to be utterly out of place, utterly estranged from our environment and those around us.  We have to deal with a foreign language and culture in the same way and at the same time as Doug does.  The gauntlet is thrown; it is for you, dear reader, to take it up and see Chisa Hutchinson’s latest.