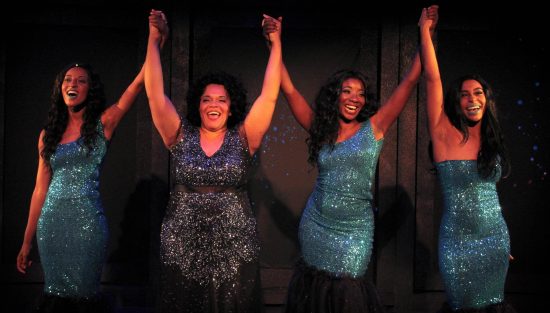 Hard to believe that Dreamgirls premiered on Broadway 35 years ago this year.  Given the degree of honors and awards it garnered, it’s easy to believe that it’s still being produced.  The Arts Centric production currently running at the Motor House on North Avenue is a soul-stirring affirmation.

Dreamgirls tells the story of a Supremes-like girl group on their trajectory to fame, beginning in the sixties to the height of their stardom in the mid-seventies.  Along for the ride is the brother of one of the girls, who writes their music. The group is led by Miss Effie White, a big woman with an outsized talent and an innate suspicion of being controlled by anyone.  Lorrell Robinson and Deena Jones are her two singing cohorts.  When asked to be the backup singers for big recording star Jimmy Early, they are on their way to stardom all while being guided by the Svengali-like Curtis Taylor, Jr. The plot takes a lot of turns in a tune-filled musical peek at what goes on behind the scenes.

Director Kevin S. McAllister has put together a team of cast and crew that delivers a first-rate production.  McAllister keeps the action constantly moving, adding humor to scenes there, a projection here, and everywhere a sure-handed professionalism.  Well-paced and extremely well directed.

Jeff Harrison’s minimalist set design is more suggestive than actual and works nicely on the stage at Motor House.  Three panels at the back of the thrust stage become projection screens and let the actors enter and exit as well from behind each one.  Helen Garcia-Alton lights the stage nicely, and Riki K’s projections are extremely effective. Michael Lambert’s wigs and Sierra Evans’ and Sami Parrish’s costumes are a great compliment to the period.

Cedric D. Lyles skillfully conducts one of the best pit bands I have ever heard in this city.  And his skill as musical director is on display in every pitch-perfect, harmonic blend of the chorus as well.  Every number sounded well-rehearsed by the excellent chorus and principals.

The chorus of this show is so good that I wish I could single each and every one of them out.  I’ll have to suffice to say that individually and as a group they are absolutely superb.  This is one of those local productions that has no weak links.  Every one shines in the smallest of parts, staying in character and on point.  Jimmy Early’s  band  rocks, the group dance numbers sizzle and pop, and their voices are all terrific.

Among the featured players, standouts include Jhermaine  Drakeford as singer Tiny Joe Dixon, and Calvin Tucker, Jr. as Marty, Jimmy Early’s frequently exasperated manager.  Tonnia Dixon plays  Michelle, a late comer to the dreams. Ms. Dixon is a fine actress and singer and one I look forward to seeing more of her talents.

Tevin Brown has a charming naivety as C.C. White.  With a fine voice and an unassuming manner, he brings just the right tone to the part of the aspiring songwriter and brother of one of the Dreams.

Sequina DuBose  plays Deena Jones and shines as bright as her name implies.  Reluctantly thrust into the star position with the group, she is as adept at showing her confusion and lack of confidence off-stage as she is at displaying her great voice and supple dance moves in every musical number.

Shaun Mykals is smarmily effective as the conniving Curtis Taylor, Jr.  Able to be charming and suave one minute and vicious and cruel the next, his is a compelling performance.  It is the kind of character you love to hate and in the final scenes, I found myself wanting a little more justice to reign down on him – a sure sign of a convincing and talented actor.

Alana Linsey is all wide-eyed wonder as Lorrell, the ‘baby’ of the group.  When she announces she has ‘become a woman’ she’s a hoot.  In a scene where she tells Jimmy Early she’s tired of waiting for him to divorce his wife, she’s hilarious.  And when she opens her mouth to sing, she’s an angel; an angel who packs a powerful vocal punch, truth to tell.

Bryan Jeffrey really should see a doctor about the seeming lack of bones in his rubber hips.  As Jimmy Early, super soul singer on a downward slide, he swivels and slithers, twists and shouts, struts and slides like James Brown reincarnate.  An exceptionally talented singer, he hits notes that leave you wondering just where the heck did THAT come from.  This guy’s a star just waiting for the right spotlight to hit him.

But let’s face it.  This show is all about one Effie White.  And what an Effie White  Art Centric has found in Crystal Freeman.  She’s a gifted actress who knows how to dominate the stage just standing still.  Her performance is riveting.  And she’s a veritable vocal tsunami.  The famous Act 1 closer, “And I Am Telling You I’m Not Going” is everything you hope for in any production of Dreamgirls. It is achingly honest and heartbreakingly raw.  She leaves every emotion, stripped and bare, on the floor of the stage.  Brace yourself.  You’ll need a minute to recover when she’s done.

Arts Centric is committed to bringing to Baltimore productions created and largely performed by people of color.  This production does that superbly.  Hats off to the powers that be who created the marvelous performance space at Motor House.  And deep bows to the creative team behind Dreamgirls.  Long may they both thrive in a city that can use all the uplifting we can get.  Dreamgirls is a great place to start.