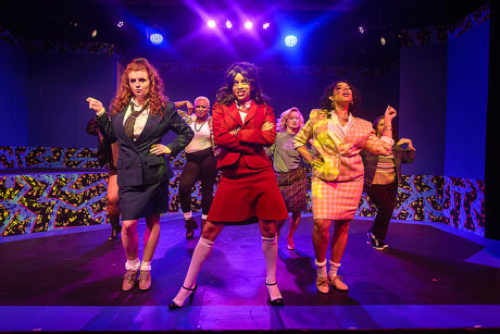 As a child of the 80s, I was looking forward to seeing Heathers: The Musical, which in my mind was something like the original ‘Mean Girls.’  However, it’s been 20+ years since I’ve seen the movie, and I don’t remember much other than three cliquey girls named Heather who let Winona Ryder into the circle.  Let’s just say the dark comedy, currently playing at Red Branch Theatre in Columbia, makes ‘Mean Girls’ look like Sesame Street.

Veronica Sawyer (Vivian Cook) is a 17-year old outcast who’s invited to join an exclusive group of popular girls (all named Heather) once she proves herself useful with her forgery skills.  However, things get complicated when Veronica makes a faux pax at a kegger, and Heather Chandler (Tiara Whaley) threatens to exile her from the group.  At that point, Veronica’s outsider boyfriend (Hasani Allen) plots to bring Heather down through murder, and things quickly spiral out of control.  (Think multiple murders with Veronica using her awesome forgery skills to cover up the crimes.)

‘Heathers’ is full of vulgar moments, and in my mind, the crassness is completely over the top.  ‘Blue’ extols sexual frustration while another number mentions a ‘swordfight’ in a certain body orifice.  Never mind doing unspeakable things with a chainsaw.  This turned the musical from some high school dark comedy to a vehicle for curse words and off-color humor.

Strip away the vulgarity, and Heathers has some touching moments (implying the musical could survive without all the obscenities).  In the heart-wrenching “Seventeen,” Veronica and JD admit that even kids that are damaged want a normal life – bowling, seeing bad movies, and eating chili fries.  In “Freeze Your Brain,” JD explains his past. Although he’s moved more times than he can count, 7-11 is the one constant, and slurpees have a way of making you numb to the pain (via ‘brain freeze’).  In “Tiniest Lifeboat,” Heather McNamara (Geocel Batista) sings about trying to survive among the social pressure of high school.  And in “Kindergarten Boyfriend,” Martha (Amy Williamson) recalls more innocent times, when she kept Ram’s scab in a locket.

Cook does a great job as the angst-ridden Veronica, complete with the trademark monocle and reading of diary entries.  Her dark number, “Dead Man Walking,” gives us a look into her conflicted soul.  Allen is cool and persuasive as JD, able to get Veronica to do anything against her will.  He also has an amazing singing voice, demonstrated in numbers like “Our Love is God” and “Meant to Be Yours.” Taylor Witt and Tendo Nsubuga, as dumb jocks Kurt Kelly and Ram Sweeney, provide comic relief including some great slo-mo fighting scenes.   And Whaley is the epitome of an evil Barbie girl as ‘mythic b’ Heather Chandler.  Unlike the film, Kurt, Ram, and Heather C come back from the dead to sing and mouth off to Veronica and JD; a smart move since it keeps their characters ‘alive’ throughout the musical.

The costumes are 80s chic (thanks to Cierra Coan).  The Heathers are all boxy blazers, shoulderpads, and big hair (complete with the lead Heather wearing the trademark red scrunchie).  Westerburg High’s stereotypes are outfitted as expected – ‘the nerd’ in an argyle vest and glasses, ‘the preppy guy’ with a sweater over his shoulders, and ‘the fat girl’ in a bright purple sweatshirt.  The set (Clifford Hannon) is painted a bright blue with an 80s graphic and allows the cast to be on different levels at the same time.  Directed by Amelia Acosta Powell, the ensemble makes good use of the aisles, sitting down during the pep rally and looking ghostly with flashlights prior to the death of Heather C.

Although the musical promotes kindness and acceptance in the end, it seems like a long dark road to get there.  In this day and age, with bullying and suicide as hot topics, Heathers just somehow seems wrong.  Even the musical’s first number, “Beautiful,” consists of some horrible name calling — something school authorities today would put a stop to immediately.  Sure, most of us can relate to being teenage misfits and getting even with the popular kids, but that doesn’t mean we’d actually go through with it.  And after the horrors of Columbine, it seems insensitive to have an armed student in a long, black trenchcoat.  Times have changed since 1988.

Heathers has a lot going for it — smart lyrics, great voices, fun dance numbers, and memorable characters.  However, in order enjoy the show, you have to give in to the satire, accept the profane language, buy into the cynicism of the characters, and ignore the part of your brain which is telling you ‘this is so wrong.’

Heathers plays through August 27, 2016 at Red Branch Theatre Company performing at the Drama Learning Center, 9130-I Red Branch Road in Columbia, MD. For tickets, call the box office at (410) 997-9352, or purchase them online.