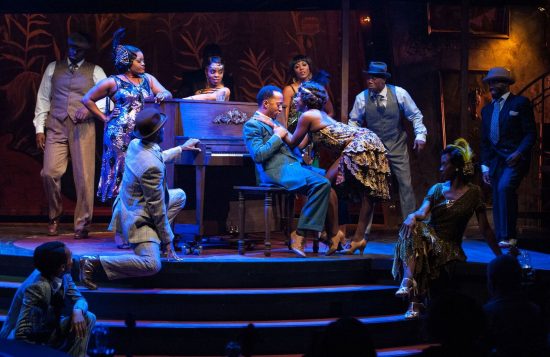 It was truly another world back then. New musical styles, upward mobility, a clash of cultures. Or, then again, it could sound a lot like today. That may be why one is so comfortable walking into the theatre-turned-into-speakeasy Jungle Inn, the famous New York destination for Blacks in the 1920s in Signature Theatre’s ambitiously staged musical production of Jelly’s Last Jam.

It is an enervating experience, an immersive staging of a show. With its 3 connected, raised stages, nightclub tables close by, spiral staircases and heavy art deco tapestry, it evokes certain honkytonk sadness about the past, and the life decisions of one Jelly Roll Morton, the self-styled jazz legend and noted raconteur. In mirroring this memory show, the set seems like a floating vehicle for his life, half raised, yet asymmetrical, reflecting his circuitous path. Replete with a rising piano on one of the three jutting stages, it is for touches like this that we send kudos to Scenic Designer Daniel Conway for the throwback world he has created for Jelly’s outsized life.

This Jelly isn’t always smooth, but come on in and enjoy the Jam.

And what a full life.

Born Ferdinand Joseph LaMothe, he picked up his more famous moniker Jelly Roll Morton after he set out on his own. He is generally regarded and had no qualms claiming his position as one of the driving forces behind the introduction of jazz to the American public in the early 20th century.

LaMothe was born into a Louisiana Creole family. At the precocious age of fourteen, he began working as a piano player in a brothel. After his church-going grandmother found out where he was playing, she kicked him out of her house, thus starting him on his artistic and personal search for identity.

Jelly is quoted as saying “When my grandmother found out that I was playing jazz in one of the sporting houses in the District, she told me that I had disgraced the family and forbade me to live at the house… She told me that devil music would surely bring about my downfall, but I just couldn’t put it behind me.”

Using the device of a spirit figure (the bombastic Creole-garbed basso profundo Cleavant Derricks in a slightly overblown yet enjoyable role), we see Jelly Roll Morton brassy and full of bad habits, taking on the world. Mark G. Meadows, an accomplished local jazz talent, is an affable Morton, with an easy smoothness onstage and comfortable banging out riffs on the piano. Yet his nature works a bit against his portrayal of the sometimes notorious, bitter and racial Jelly Roll, and conceit of the guiding spirit, a la Wonderful Life and Christmas Carol, is unfinished if there is no redemption, only perdition—a sad life dying friendless in an LA hospital. Act II can’t hold up to the audacious promise of the first act, it left me wanting to understand the man, and even his creative process, which wasn’t explored.

Happy endings aside, the key is the brash telling of the story in the intimate moments in Jelly’s life. Young Jelly’s banishment by his disapproving grandmother and his romance with Anita, the tough minded yet sultry nightclub owner (a mesmerizing Felicia Boswell) brings his pain to the surface, in great bluesy songs, especially the cloying “Play The Music For Me.”

Though the dialogue is somewhat bumpy, (we are hit over the head several times that Jelly thinks he invented jazz…) the driving force in this retelling is the movement onstage. Not that it is an impressive assemblage of talent, the sort of show that is not often performed, yet by its very demands, attracts top shelf performers that are double and triple threats.

The trio of lacy clad Kara-Tameika Watkins, Eben K. Logan, and the easy to watch Nova Y. Payton stole many scenes and their outfits were almost worth the price of admission.

Choreographer Jared Grimes has an astounding assemblage of talent and uses them in innovative ways in tight quarters.

This Jelly isn’t always smooth, but come on in and enjoy the Jam.

Running Time: 2 hours and 15 minutes with an intermission.

Advisory: Adult themes and sexual content drug use and smoking.