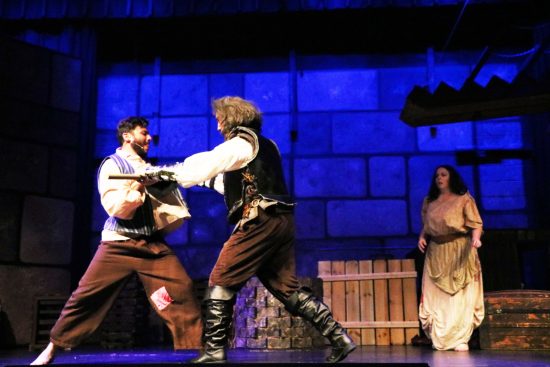 If my memory serves me correctly, and it’s been quite awhile, the Spanish Inquisition was not a pleasant period. There was an abundance of greed, cynicism, hostility, violence and yes, torture. That era during the 16th century serves as the backdrop for the five-time Tony Award winning musical “Man of La Mancha” that was first produced in 1965.  The quest to better the world against all odds is the central theme.

“Man of La Mancha,” a favorite production among professional and community theatres alike, is making an all too brief appearance at Beth Tfiloh Community Theatre.  Through the years, Beth Tfiloh has been consistent in mounting well-performed musicals drawing on a wide swath of mainly young talent from the Baltimore area.  Under the direction of Diane M. Smith, the current production is no exception.

Noted for its popular standards, “The Impossible Dream” and “Dulcinea,” “Man of La Mancha” with music by Mitch Leigh, lyrics by Joe Darion and a book by Dale Wasserman, is a play within a play.

Tax collector Miguel de Cervantes and his manservant are tossed into a dungeon “common room” awaiting trial by the Inquisition. They were charged with foreclosing on a church for not paying taxes. Lugging all their belongings down the stairs into the room, the other prisoners ferociously seized them but Cervantes pleaded with them not to destroy a carefully wrapped package containing a manuscript.

A mock trial is to take place where his guilt is presumed and all the possessions would be turned over. As a defense, Cervantes proposes that he enacts a play with the help of the other prisoners.  One of them, The Governor, agrees, and that sets in motion the primary storyline.

For this play, Cervantes creates the character Alonso Quijana, an elderly man so filled with idealism he becomes a bit “mad.” He sees himself as a knight-errant and renames himself Don Quixote.  Along with his loyal sidekick Sancho Panza, Don Quixote obsessively sets out to find the good in a world filled with darkness and pessimism.

During this journey, the delusional but well-intentioned Don Quixote mistakes a windmill for a giant and a roadside inn as a castle. There he meets a broken and bitter harlot named Aldonza whom he calls Dulcinea. He woos her with kindness and chivalry but she is too jaded to appreciate the gestures.

The obstacles Quixote has to navigate from cynical individuals to abusive muleteers form the core of the story with a beautiful array of songs and a dose of comedy to carry the plot to its sad ending.

As the lead, Jim Knost performs lustily and with feeling. Don Quixote is an underdog, and Mr. Knost elicits empathy for the character with his acting skills. His big number “The Impossible Dream” where he lays out to Dulcinea his dream, his mission in life, is delivered with a tuneful richness using his strong baritone voice.

Perhaps symbolic of his character’s challenges throughout the plot, Mr. Knost’s “unbeatable foe” was the flawed operation of his mic during the first half of the show and then again in the final 10 minutes. This was an unfortunate development especially for the lead, but undoubtedly it will be remedied in the subsequent productions.

An outstanding performance is given by Kerry Jungwirth as Aldonza/Dulcinea, a prostitute who is abused by the local muleteers. Her self-esteem barely exists until she meets Don Quixote.

Musically she is top rate showcasing her lovely soprano voice in “It’s All The Same,” “What Does He Want of Me,” and “Aldonza” among others. Ms. Jungwirth’s acting prowess is quite evident as her character runs the gamut of emotions in her encounters with Quixote.  Clearly a polished performer, Ms. Jungwirth adds quality to the production.

As Sancho Panza, Carl Oppenheim plays the loyal squire effectively. He performs several solos including the cute number “I Really Like Him,” where he tries to explain to Aldonza why he doggedly follows Quixote.

A fine performance is turned in by Allie McLoughlin as Antonia, Don Quixote’s niece. She shines in “I’m Only Thinking of Him,” using her bright soprano voice.

All are fitted in splendid, imaginative period costumes (including horses) deftly designed by Nicole Smith. The mirror shield costumes worn later in the show stand out.

The seven-piece orchestra led by Chris Rose is excellent in executing the rich score and not overwhelming the vocalists.

Evan Margolis designed the set consisting mainly of stone walls to denote the dungeon’s stark common room. Yet, with the movement of a few props and furniture pieces and Elan Hamburger’s well designed lighting, the multiple scene changes are seamless and efficient.

The presentation of “Man of La Mancha” by Beth Tfiloh Community Theatre is expertly directed, well staged and performed competently by an energetic cast with some standout vocal performances.  Using beautiful melodies, the story exemplifies the human spirit with one man’s quest against all odds to right the wrongs of which there were many.  It is worth a visit, but hurry, and follow that star.

Running time. One hour and 45 minutes with no intermission.