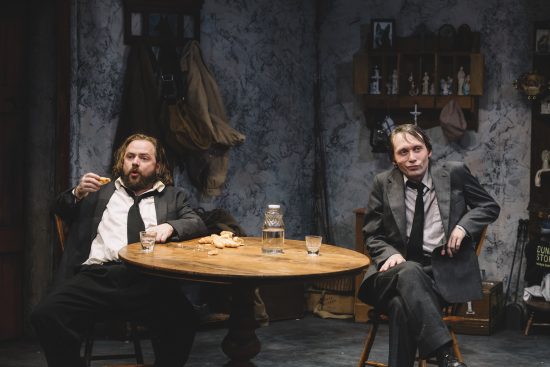 Matthew Keenan and Bradley Foster Smith appear as brothers, Coleman and Valene, in ‘The Lonesome West’ at Keegan Theatre in Dupont Circle.

An essence of Dupont Circle-based Keegan Theatre’s work is “scripts that put real people out there on the stark edges of life.” The edge couldn’t be much starker or farther out there than it is in Keegan’s latest dark comedy, The Lonesome West, written by award-winning Irish playwright, Martin McDonagh and directed by Mark A. Rhea and Josh Sticlin. The third and final installment in McDonagh’s Leenane Trilogy, set in the unapologetically vexing, fictional village of Leenane, Ireland, this play makes an enthralling delight out of two of the vilest, most dishonorable, irrational, and tiresome simpletons imaginable.

If I may make a holiday reference in August, imagine a recluse as unscrupulous as the Grinch and a miserable miser as parsimonious as Scrooge. Now imagine that they’re brothers who live together in the same rural Catholic-Irish house, and you’re most of the way there to understanding Valene and Coleman, the show’s two main characters, played by Bradley Foster Smith and Matthew Keenan, respectively. But unlike the Grinch and Scrooge, these aren’t a pair of romanticized G-rated antagonists who we all know are going to come around in the end—far from it. When their father’s unexpected death leaves Valene with his entire meager inheritance and Coleman with nothing, deep, life-long wounds are re-opened, sending these two at each others’ throats for the better part of two and a half hours. When the only other two people in their lives—an overwhelmed local parish priest (Chris Stezin) and a cheeky teenage girl who doubles as their bootleg alcohol supplier (Sarah Chapin)—attempt to mediate, hilarity and devastation ensue.

In this production, Rhae and his cast manage to conjure up a story that is both viscerally authentic and hyperbolically maddening at the same time. All characters are raw and complex, even as the circumstances around them and actions they take in response become increasingly fanatical and bizarre as the play progresses. Valene and Coleman best demonstrate this paradox—giving off isolated glimmers of humanity and heart between hateful altercations and violent tantrums. Smith and Keenan keep the audience on edge as they playfully jump between slapstick shenanigans, startling rage, and a few tender moments. This all compliments Stezin’s believable projection of a good-hearted, but troubled Father Welsh, a priest at the end of his rope in his efforts to mend the deep rifts that divide these brothers and the community. You can’t help but feel for the poor chap. Meanwhile, Chapin’s buoyant Girleen brings welcome joviality and pure likeability that’s a welcome relief in this otherwise erratic set of characters.

The set for this production, designed by Matthew J. Keenan and dressed by Carol H. Baker, feels as lived-in and authentic as the characters themselves, capturing the viewers’ gaze from the moment they enter Keegan’s intimate theatre space. The brother’s entire rugged cottage is opened up to the audience, as if a wall had been removed, framed by substantial overhead beams, grubby walls, and anchored by a domineering smoke-stained stone fireplace (with both a rifle and crucifix symbolically sharing the space over the mantle). Costumes by and Erin Nugent and hair and makeup by Craig Miller are all sparingly applied so as to fit in unassumingly with characters who probably wouldn’t have given a second thought to what they were wearing (with perhaps the exception of Girleen).

Sound by Tony Angelini and Lighting by Colin Dieck made hearing and seeing this story effortless for the audience, to the point that they might forget such a crew is behind the scenes at all. Not to be forgotten, though, was the stage crew, managed by Alexis J.  Hartwick, who shamelessly danced their way through scene changes, backed up by a mix of 90s and early 2000s pop favorites, to audience giggles. Fight choreography by Casey Kaleba was riveting and suspenseful, utilizing the entire stage and certain props. I don’t pretend to be an accent expert, but the three non-Irish cast members’ voice training seems to have paid off. I only caught one moment where an American-sounding pronunciation may have slipped out.

Cleverly written and directed and enthusiastically acted, The Lonesome West contrasts romping juvenile rough-housing with some of the weightiest of adult themes and questions, offering the audience multiple layers of engagement. Whether you want to explore the more contradictory clashes of human nature, or to simply laugh your head off at absurd situations and hilarious antics, this high-energy production is sure to leave you reeling.