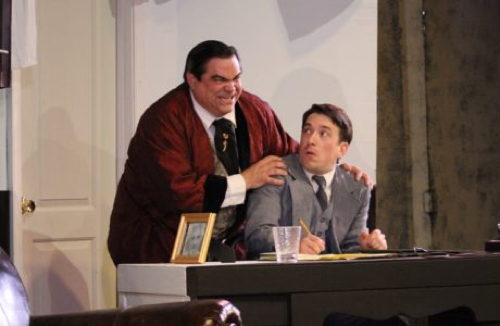 The Producers has always been one of my favorite musicals. The characters are hilarious, the songs clever and biting, and the Broadway setting dazzling. Annapolis Summer Garden Theatre pulls out all the stops for its production. The company is unafraid of even the most bold and sometimes cringe-worthy elements of Mel Brooks and Thomas Meehan’s musical, like revealing the dozen or so giant swastikas painted on the walls during the song, “Springtime for Hitler.” It’s true that if you are to do this musical, which first premiered as a film in 1968, you have to go all the way. Make those satirical parts as ridiculous as possible. With a talented cast and production team, Annapolis Summer Garden Theatre hits every note, joke and high kick.

One of the most impressive aspects of this production is its ability to impress with every transformation of the outdoor space. Peter Kaiser’s set literally unfolds to reveal Max Bialystock’s swank New York office, a multi-level stage, or a jail cell. Lighting Designer Matt Tillet brings scenes to life with stark contrasts of Nazi red (in “Springtime for Hitler”) and bright whites (in the subsequent “Where Did We Go Right?”) Ken Kimble conducts the excellent orchestra, which performs behind the stage.

A big round of applause must be given to choreographer Emily Frank, especially for her tap number “I Wanna be a Producer” and the strange and outrageous “Der Gutten Tag Hop-Clop.” I was also constantly impressed by the many various costumes, both elegant and appropriately ludicrous. Costumer Jocelyn Odell and assistants must have worked tirelessly, especially on “Springtime for Hitler” costumes, which include a chorus girl in a scandalous picnic blanket get-up with beer steins dangling, and another with a large Bratwurst hat.

B Thomas Rinaldi as the scheming Max Bialystock and Nathan Bowen as the anxious Leo Bloom are excellent. Rinaldi punches every one of his jokes, turning to the audience for effect. “Betrayed,” is one of my favorite performances from Rinaldi, who takes a moment to address the audience on the progression of the show and the Annapolis weather. Nathan Bowen is perfectly hysterical as Bloom, clutching his blue blanket to his face and exhibiting a talent for physical comedy. Bowen has a beautiful voice, and shone especially on “I Wanna be a Producer” and “That Face.”

Pete Thompson as the flamboyant Roger DeBris and Kevin James as his over-the-top “common law assistant” Carmen Ghia are a delightful duo. Thompson’s turn as Hitler in “Springtime for Hitler” is especially uproarious. Erica Miller is playful as Ulla, the Swedish actress/secretary who shows up on Bialy’s doorstep one day. Her portrayal of Ulla’s Swedish accent is flawless and had the audience laughing after many a line.

I wish more scenes featured Franz Liebkind, former Nazi and writer of “Springtime for Hitler” musical, only so that we may see more of Josh Mooney’s lively performance. Mooney has the ability to switch between insane Hitler fan to ridiculous pigeon lover, and to great comedic effect. In the song, “In Old Bavaria,” Mooney showcases a lovely voice while singing to his pigeons (great puppet work from the pigeons!).

The large ensemble of ASGT’s Producers was chosen well. Other than the dancing and singing talent of every ensemble member, several of the ensemble members really shine. Among them are Debra Kidwell as “Hold Me Touch Me” and Stephanie Bernholz as Roger DeBris’ female crew member and pianist in “Springtime’s” auditions.

The Producers is known for its boldness-jokes and images that have audiences roaring with laughter while simultaneously shaking their heads. ASGT took on these ridiculous characters and situations with gusto. However, some of the show’s stereotypes that are perhaps intended to mirror those of the 1960s, particularly those of gay men and women, seem outdated. While I applaud ASGT for taking on this magical, wonderful musical, I only wish several of these stereotypes and jokes could be updated or nuanced for our audiences.

The Producers plays through September 4, 2016 at Annapolis Summer Garden Theatre, 143 Compromise Street, in Annapolis, MD. For tickets, call the box office at (410) 268-9212, or purchase them online.