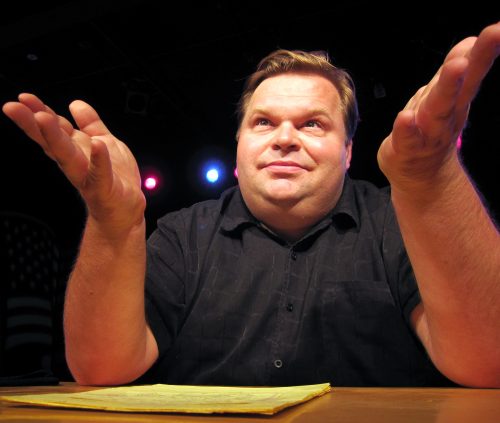 Mike Daisey in The Trump Card, Photo by Ursa Waz

Trump, Trump, Trump. That man is everywhere lately. I am no fan of Donald Trump and was skeptical of a play that draws further attention to him.

Created and performed by Mike Daisey and Directed by Isaac Butler The Trump Card is a monologue about the life and times of Donald Trump. Conceived prior to Trump’s meteoric rise to the Republican Presidential Candidacy, The Trump Card is part personal journey, part historical dissection. Daisey contextualizes Trump’s childhood and professional relationships and compares Trump’s life journey with his own. Help me, Daisey even manages to humanize the Donald.

…makes you want to laugh and cry at the same time.

Daisey admits his fascination with The Apprentice and the game show-like Republican presidential primaries and his unabashed admiration for Trump’s ability to play by his own rules. One of Daisey’s great strengths is his ability to contrive inventive and fantastical analogies.

Daisey’s monologue contains abundant amounts of crass language. If the f-word is not your cup of tea, The Trump Card may not be for you. Irreverent and witty, Daisey does not shy away from mulling over the harsh truths. The Trump Card is not a standup routine; it is a well-rounded, complex monologue.

Daisey dissects and reconstructs the Donald, simultaneously reinforcing and challenging his liberal audience’s perception of the man who would be president. His monologue juxtaposes absurdity with doom and gloom to capture the reality of the 2016 presidential race. Just like the Donald himself, The Trump Card makes you want to laugh and cry at the same time.

The Trump Card is constructed for a very specific set of self-identifying leftists. It would be a long, really awkward night if you lean to the right. Whether you are conservative or liberal, however, Daisey will playfully stick a skewer through you.

Despite never moving from his seat behind his desk onstage Daisey manages to deliver a compelling and dynamic performance. He has an unbelievable amount of energy. Daisey’s speech is decisive and eloquent. He freely contorts his face or manipulates his voice to suit the monologue at any given point.

Because The Trump Card is delivered as a monologue, there are no scene changes and there is no intermission. Nevertheless, The Trump Card chugs along at a fair pace. Daisey utilizes mood fluctuations, indicated by a sudden change in Daisey’s demeanor or lighting onstage, in the place of scene changes. Still, this no scenes, no intermission, no plot format is a tad disconcerting. Just like the Donald himself.

Unfortunately, we live in a world in which we are constantly inundated with information about Donald Trump. It’s debatable whether or not The Trump Card rises above the din. Nevertheless, The Trump Card is a fun night out.