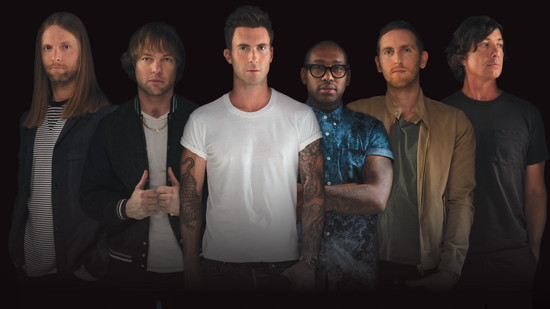 The wait game is finally over! Looking for a night of epically jam-packed entertainment perfectly packaged into one explosive setting?  Look no further.  Along with R. City, Maroon 5 knows exactly how to punch dap a signed, sealed, and delivered performance, but make sure you grab your tickets ASAP because they are going fast like hot cakes.  And with Adam Levine’s new baby on the way, we’re pretty darn lucky to even witness a concert on timely schedule these days.  On September 16th 2016, Maroon 5 headlined the Baltimore Royal Farms Arena’s venue along with frontman Adam Levine, and opening acts R. City and Tove Lo also taking the stage by storm.

What started as former alternative-rock band known as Kara’s Flowers in 1994, when Levine and band members were in high school, quickly transformed into a profound evolution beginning in 2001 with the newfound Maroon 5, releasing their debut album, Songs About Jane, and continuing to grow stronger with albums, It Wont’ be Soon Before Long, Hands All Over, Overexposed, and their latest album titled V, produced along their evolving journey.

This extraordinarily talented performer slays with a continually consistent falsetto range from the Voice Gods and an epically phenomenal band to match.

Opening for the main attraction, R. City, (pronounced as Rock City) set the tone for the entire concert performance with epically energetic, feel-it-vibrate-deep-within-your-bones kind of bass drums, laying the foundational framework for a concert done right.  R. City is a duo composed of brothers, Theron, and Timothy Thomas from Saint Thomas, U.S. Virgin Islands.  Known for their smash latest hit, “Locked Away,” from album, What Dreams Are Made Of, featuring Adam Levine, A.I and Uptown AP, (stage names used respectively) the brothers introduced this popular song as a story from when they were kids and their father went to prison, who later asked their mother the following question: “If I got locked away and we lost it all today, tell me honestly, would you still love me the same?”  And the rest ladies and gentlemen sets the bar for their song lyric history.

Next up:  Ebba Tove Elsa Nilsson, known as Tove Lo, a Swedish singer/songwriter who graduated from musical magnet school, Rytmus Musikergymnasiet and became a touring artist known for her radio hit, “Talking Body,” from album Queen of the Clouds. Now if we are talking comparisons between artists, just to give you an example image, Tove Lo’s style is somewhat of a psychedelic rendition of Keisha with an emphasis on free love and sexuality.  Despite technical difficulties in the middle of her performance, “Don’t Talk About it,” Tove Lo held her own and finished the song like a pro.

Now if we’re talking Adam Levine…what does he not do?  First off, I have to say major props to him for being able to juggle everything on his plate beautifully with a new baby expected any day now, professional coaching on hit Reality TV Singing Competition, The Voice, since Season 1, touring around the country, and not to mention continuing to manage his own songwriting and producing his new music.  Levine knows exactly how to drive his own game with finesse respectfully.

With that being said, Levine and Maroon 5 opened their set list with an infused medley of “Moves Like Jagger,” from album Hands All Over, segueing into killer guitar solo riff with bandmate and solid lead guitarist, James Valentine into a crowd pleasing battle transitioning into “Harder to Breathe,” from album Songs About Jane.  And this was just the beginning.  Levine and Maroon 5’s super-charged energizer bunny-like transitions literally just kept going and going, from a medley of R. City’s “Locked Away,” into “One More Night,” from album Overexposed, into “Misery,” from album Hands All Over, into a breathtaking rendition of “Love Somebody,” from album Overexposed. The superhuman frontman continued with mind-blowing, crowd-pleasing non-stop transitions, giving off an ultimate natural high in “Animals,” from his latest album, V, singing and howling from his core gut into “Maps,” also from the latest album.  After a highly energetically charged, pumped up “Lucky Strike,” from album Overexposed, Levine finally began to show off his true vocal chops into a smooth transition of “Sunday Morning,” from album Songs About Jane, his best vocally, in which he thankfully exposed his gorgeous, signature, Michael Jackson-influenced falsetto range.

Typically concert artists introduce themselves and mingle with the audience after the first song or two. Not Adam Levine.  After what seemed for about an hour, Levine finally approached the top of the crafty arrow-shaped stage, in his most chilled-out, and informal greeting while giving a sweet shout-out recognition to the entire crew and letting down his human side in giving some love to his dog he misses dearly.  Leading into a fresh a cappella rendition top of the number of “Payphone,” from album Overexposed, the entire band introduced a popular version of the song.  And with every YouTube rendition of “Daylight,” from Overexposed, I’ve always wondered why audience members sing along cheerfully to such a heartbreaking song.

Levine’s stunning rendition of “She Will Be Loved,” from Songs About Jane, topped the icing on the cake as he naturally led the crowd into harmony and unison with a specific ambitious mission of having everyone put away their cell phones, to the point where he dared to take away a woman’s cell phone while laughing it off, and leaving it on the stage.  It’s Adam Unplugged Ladies and Gentlemen.  What you see you is what you get with Levine.  There is no filter and certainly no holding back from him. And I have to say; he brings up a valid point.  Could we all just travel back in time and go to concerts where we simply enjoy and savor the music for what it’s worth the way we savor a five-course gourmet meal and give the artists the respect of paying our undivided attention to at the very least?

If you have the opportunity to see Adam Levine perform with Maroon 5, I highly recommend you do so.  This extraordinarily talented performer slays with a continually consistent falsetto range from the Voice Gods and an epically phenomenal band to match.