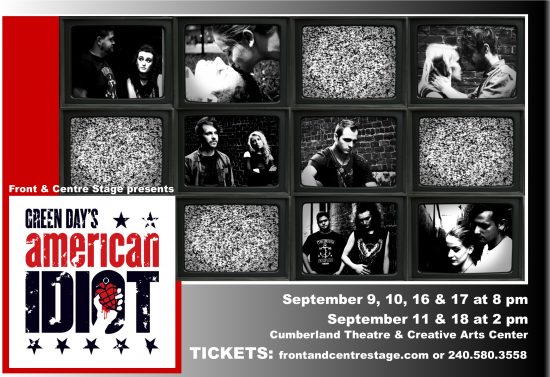 Recently, I decided to go see a theater performance that I had been hearing about around town. I had seen some of the cast members run a preview in Frostburg at Dante’s open mic night. Greenday’s AMERICAN IDIOT is most definitely the edgiest and raw performance I have seen at the Cumberland Theatre. The musical score follows the band’s 2004 album down to the note. While at first I was skeptical about how much I would enjoy some of the key music of my teens acted out, I quickly realized as the show started that putting this music on stage really brings the album to life.

The cast features talented local musicians Gibb Cochrum and Ian Robinson, and vocalists Kimberli Rowley, Savannah Humbertson, and Aimee Conley, among many other very talented young actors. The entire show was fast paced, very high energy, and stimulating. To say the least, I could absolutely not believe what I was seeing on stage. A few of the early scenes had dance moves that reminded me of high school days going to Ahern’s Arcade on Virginia Avenue to see punk bands.

The story follows three friends, played by Cochrum, Hayden Kline, and Kirk Yutzy, while they go down equally intense and interesting paths in their own regards. Being a member of the millennial generation, much of the plot is very relatable. The story creates commentaries on situations that many people in their 20’s and 30’s in America find themselves in. Sex, drugs, and general disenchantment are the pillars of this production. That being said, this is very much a play for people who have already grown up, so finding a babysitter for the evening is suggested.

The actual band is a pivotal part of the production, as they are center stage the entire time performing spot on Greenday covers with enough fervor to test the limits of the Cumberland Theatre’s sound system, as any good punk show should. Actors also get several opportunities to show off their abilities with instruments as well, from solo acoustic guitar performances, to drumming on the scaffolding used as a main set piece. Both the set, designed by Don Whisted and the costumes, designed by Wendy Snow, are extremely dynamic, well thought out, and very entertaining in their own rights.

I think that the fact that this music was created upwards of 10 years ago and is still relatable today is notable. Anyone who has listened to Greenday’s American Idiot, or is paying attention to American culture would appreciate seeing Front & Center’s production at the Cumberland Theatre this weekend. Tickets for Friday and Saturday night’s shows, as well as Sunday’s matinee are available online.