Opera Review: ‘The Marriage of Figaro’ at The Washington National Opera 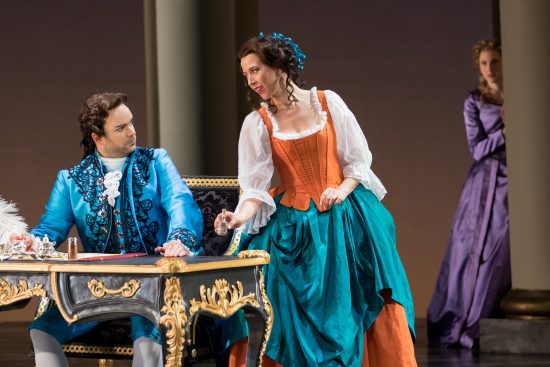 Dust off your tiaras and opera glasses, the Washington National Opera (WNO) 2016-2017 season is underway. “The Marriage of Figaro” (“Le nozze di Figaro”) is an Italian language opera buffs written in four acts. The score is the brainchild of the inimitable Wolfgang Amadeus Mozart with the libretto by his brilliant partner-in-crime Lorenzo Da Ponte.

A sequel to “The Barber of Seville”, “The Marriage of Figaro” is set in Seville, Spain. It’s Figaro (Ryan McKinny) and Susanna’s (Lisette Oropesa) wedding day. Huzzah! But when Figaro discovers that the Count (Joshua Hopkins) keeps trying to seduce his bride-to-be, he hatches a plan to humiliate the Count once and for all. Crazy hijinks engulf the whole household. The original upstairs/downstairs scandal, “The Marriage of Figaro” is a farcical love story for the ages.

McKinny and Oropesa are well matched as Figaro and Susanna, the charming valet and maid to the Count and Countess of Almaviva. Their comedic timing is impeccable. McKinny’s Figaro is athletic. His signature move is leaping over furniture. A formidable bass-baritone, McKinny’s vocals initially felt reserved but he grew in confidence as the opera progressed. Oropesa is immediately engaging and she demonstrates impressive control of her voice, most notable in Susanna’s playful aria “Deh vieni, non tardar.”

Amanda Majeski (Countess Almaviva) is a veritable triumph. Marjeski has performed the role of Countess in no less than three prior productions of “The Marriage of Figaro.” As predicted, Majeski’s regal Countess is one of the standout performances of the night. The Countess’s lamentation, the aria “Porgi, amor, qualche ristoro,” soars through the opera hall on the wings of Majeski’s lyric soprano.

The favorite of the evening is undoubtedly Aleksandra Romano’s effervescent portrayal of the pageboy Cherubino. Cherubino is a pants role; the role of a young boy played by a woman. Romano’s wide-eyed antics are laugh out loud funny. Romano effortlessly delivers one of the most memorable and well-know arias of the opera, “Voi che sapete.”

Other notable performances include WNO veteran Elizabeth Bishop and Valeriano Lanchas as the meddlesome pair Marcellina and Dr. Bartolo, respectively. Ariana Wehr is a bubbly Barbarina.

Conductor James Gaffigan makes his WNO debut with “The Marriage of Figaro.” Gaffigan does an admirable job of balancing his orchestra against the vocalists in the restrictive Kennedy Center Opera House.

As they say at the end of Act 4, let’s bring this comedy, ahem, review to a close. WNO’s production of “The Marriage of Figaro” is light and accessible. A safe production, no great risks are taken. There is no ambiguity or reinterpretation of the characters or the plot.

The Domingo-Cafritz Young Artist Performance is Saturday, October 1 and on September 24th the performance will be simulcast free at Nationals Park as part of M&M’s Opera in the Outfield. English subtitles are placed above the stage.

Running Time: Approximately 3 hours and 15 minutes, including one 25-minute intermission