Theatre Review: ‘All My Sons’ at The Vagabond Players 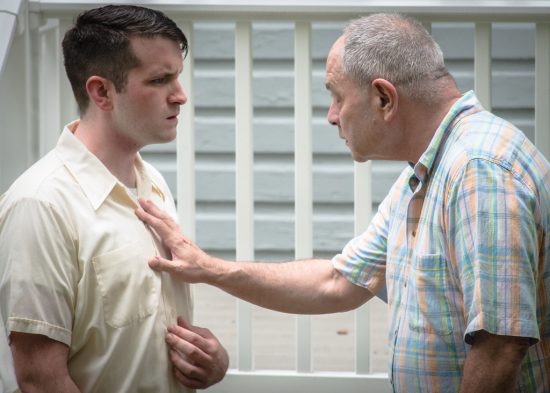 Sean Kelly as Chris and Jeff Murray as Joe in The Vagabond Players production of “All My Sons.” Photo by Tessa Sollway.

Arthur Miller is often credited as being the playwright who perfectly captured the disillusionment in the concept of the American Dream that happened post-Great Depression and World War II, largely thanks to his plays “All My Sons” and “Death of a Salesman.” In the current production of “All My Sons” at The Vagabond Players, director Michael Byrne Zemarel deftly handles Miller’s masterpiece as it explores pride, loss, familial obligation and what people are willing to do and give up for what they believe in.

The play takes place in the backyard of the Keller family over the course of 24 hours in the August of 1946. Joe Keller, the patriarch of the family, is the owner of a successful manufacturing facility which he runs with his son, Chris. While Chris fought and came home in World War II, his brother Larry wasn’t so lucky, a fact that his mother Kate has been struggling with. While Larry went missing in action three years earlier during the war, she holds out hope that any day now he’ll return home. The night prior, a tree planted as a memorial to Larry blew over during a storm, something which Kate has taken as a sign that he’s still alive. This is complicated by the timing that Larry’s old girlfriend Anne Deever is visiting at Chris’ request.

As the day wears on, the complicated history of the Kellers slowly comes to light. Since Anne still isn’t married Kate assumes that she is also waiting for Larry to return, when in actuality Chris and Anne have been corresponding for two years and are in love. Joe is suspicious of Anne’s presence, as she is the daughter of his former business partner who is now in prison due to some faulty cylinder heads knowingly being shipped to the Air Force during the war, leading to 21 American planes crashing, causing the deaths of their pilots. Joe was also under investigation but was acquitted, leading to Anne’s father taking full blame for the crime. As the evening rolls on, Anne’s brother George comes to the house after visiting their father in prison and insists that they leave together, and the truth of everything that had happened between the Kellers and the Deevers comes to the surface.

While the show focuses on the two families at the heart of the story the entire cast holds their own, with even roles that have relatively little stage time having distinct personalities and performances, making the backyard feel like part of a lived-in neighborhood. Against this rich background, however, Jeff Murray stands tall as Joe Keller, portraying a man who is in turn charming and full of bluster. He holds court in his backyard, allowing others to say their piece but always having the last word, affectionate but with a businessman’s cunning lying just underneath the surface.

It is a testament to the strength of the other actors that they aren’t overshadowed by Jeff Murray’s masterful performance. Carol Conley Evans brings a desperate energy to Kate, insistent on the life of her missing son in a raw, uncomfortable and believable way. Rachel Roth plays Anne with a confident, upbeat manner that is still resilient and prepared to stand her ground against any who might speak against her. David Shoemaker makes a strong impression despite limited stage time as George, artfully playing a man who has grown brittle and bitter while still young.

However, as the title suggests, at the core (or at least close to it) is the relationship between parent and son. Sean Kelly as Chris is compelling, a man who has seen the horrors of war and manages to still be an idealist, holding fast to the belief that at the end of the day, people are fundamentally good. The true strength of this show is the relationship that he and Jeff Murray are able to portray as Joe and Chris discuss Larry, Kate, Anne and the family business which had tainted their family name. Every time they interact it is a joy to watch.

The stage is well-utilized, with set designer Bush Greenbeck using the whole space but without it ever feeling cluttered. The Keller house, in white with green trim with a trellis covered in climbing ivy, brings back thoughts of classic Americana, with subtle touches like the silhouette of branches coming around the side of the house giving the set a surprising sense of depth considering the small space. The lighting was masterfully done by Alex Ginder, subtly evoking the late morning, mid evening and early morning respectively with soft colors, but never losing the actors to shadows. The pre-show music is made up of period appropriate tunes like “Straighten Up and Fly Right” and “Who’s Got the Last Laugh Now,” while the costuming matches in being simple and appropriate, neither distracting or detracting from the unfolding drama.

In the production that I saw there were two slight sound issues, but I’m certain those will be resolved in future performances. Director Michael Byrne Zemarel and his cast have accomplished something astounding here, a piece of American culture which is both of its time and timeless, leaving the audience breathless and ragged in a way that only great theater can.

Running Time: 2 hours and 20 minutes, including a 15 minute intermission.

“All My Sons” plays through October 2, 2016 at the Vagabond Players in Baltimore, MD. For more information, click here.