Theatre Review: ‘Angels in American Part I: Millennium Approaches’ at Round House Theatre 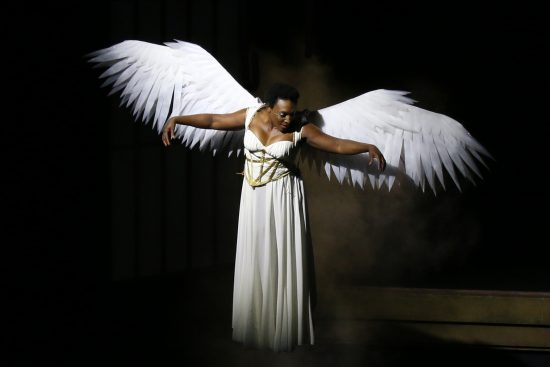 Dawn Ursula floats in as the Angel in Round House Theatre and Olney Theatre Center’s revival of “Angels in America Part I: Millennium Approaches.” (Danisha Crosby).

Round House Theatre and Olney Theatre Center join forces to bring us Tony Kushner’s Pulitzer Prize winning “Angels in America.” Kushner’s masterwork digs into the root of the issues that were being faced by America in 1985, love and justice. It is amazing that over 30 years later we are still fighting these things. Upon entering the theatre the audience must face a colossal image of Ronald Reagan and it is a staunch reminder of what the political spectrum of the era was like. It also is a striking reminder of our current political environment.

Part I “Millennium Approaches” has us anticipating the appearance of the angel for all three acts, and her arrival does not disappoint. The angel, played by Dawn Ursula, is seen by Prior, played by Tom Story, who is struggling in his fight with AIDS.

You must not miss this brilliant masterpiece.

Prior’s Jewish and intellectual boyfriend, Louis is played by the DC newcomer, Jonathan Brock. Louis is vibrant and passionate but struggles with watching Prior’s health decline. Louis also has a telling conversation with Belize, played by the fabulous Jon Hudson Odom where they deal with issues of race and privilege that could be heard in a coffee shop today. The heart of their discussion came down to ambivalence.

The other couple that this story follows is Joe (Thomas Keegan) and Harper (Kimberly Gilbert). This Mormon couple has some dark secrets. Harper is strung out on Valium while Joe is a closeted homosexual. These two things partnered with their strict religious beliefs is a struggle for the couple that ultimately tears them apart. Keegan’s towering stature pairs well with his powerful performance of a man who desperately loves his wife and is constantly trying to kill pieces of himself. Gilbert brings a delightfully childlike quality to Harper that makes her moments of rage really stand out.

Mitchell Hébert fills the role of the ruthless and villainous Roy Cohn, the great advocate for McCarthyism who was later associated with the one and only Donald Trump. Hébert’s interpretation is vile and full of that brutal energy that one could imagine was truly of the real Cohn. He never faltered in his performance and it seemed the audience truly does love to hate him.

Jason Loewith, Artistic Director at Olney Theatre Center and director of Part I did an incredible job of keeping the piece flowing well while still capturing the message. It is easy to try to blow through Angels because it is quite lengthy, and in general, scenes did not feel rushed and there was adequate space for breath and reflection.

“Angels in America” is important and relevant. And it is only just beginning as Part II opens October 1. You must not miss this brilliant masterpiece.

“Angels in America Part I: Millennium Approaches” runs through October 23 at Round House Theatre in Bethesda, MD. For more information click here.