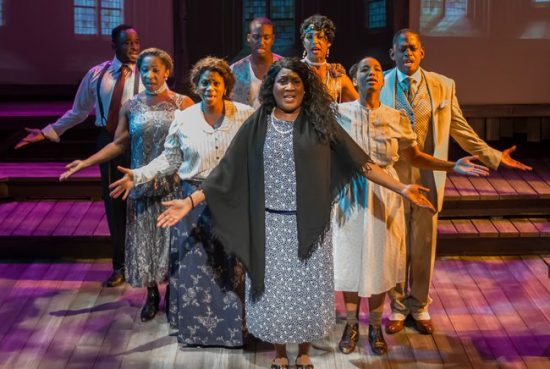 Director/artist Thomas W. Jones II is a theatrical threat on many fronts:  he choreographs, he directs, he writes scripts and lyrics—you name it he does it.  What’s more, he has some of the most talented performers in his rolodex for any project he chooses.  The results may not be perfect every time out of the gate, but I guarantee you Jones and his ensemble will always give you a thrilling, uplifting show.

MetroStage’s current production, “Blackberry Daze,” is an adaptation of Virginia native Ruth Watson’s historical novel “Blackberry Days of Summer.”  Set in a small Virginia town in the aftermath of World War I, the story revolves around the lives of three women and the man whose recklessness nearly destroys them all.

The fact that he ends up dead is hardly surprising—the opening number “Save the Sinner” tells you that he’s going to get shot—so this isn’t really a murder mystery.  The strength here is Watson’s portrait of life in the black community in the late nineteen-teens.  Then as some say now, black lives hardly matter to the white authorities; but the people who live under Jim Crow live it large, and memorably so.

Watson and Jones introduce us to three women, two adults – the house-maid Mae Lou (the proud but vulnerable Roz White) and the blues singer Pearl (the willful, smoky-voiced Yvette Spears) — and a schoolgirl, Mae Lou’s daughter Carrie (the remarkable Ayana Reed).  Whether together or apart, they have to navigate the treacherous charms of Herman Camm (played with a deliciously sleazy charm by TC Carson), whose appetites can scarcely be contained by any of them.

Camm’s plans succeed in some respects but are disrupted by the return of Pearl’s husband Willie from the Great War; Willie suspects (rightly of course) that Pearl and Herman have been more than friends.  That tale would be enough for a typical drama, but of course the canvas here is much larger, and encompasses a far more profound betrayal than mere marital infidelity.  Jones, to his credit, insists on giving us a broader view of Watson’s fictional Jefferson County.

The show’s style merits some explanation, because it has generated some complaints from the critics.  First-time visitors to MetroStage might be puzzled by Jones’ tendency to have cast members narrate crucial scenes even as they act them out:  it’s easy to forget that this combination of narrative and role-playing is one of the most ancient forms of storytelling we’ve got—it goes all the way back to Homer and then some.   This approach renders the most violent scenes all the more powerful, precisely because they are not depicted realistically.

There is also the way that the musical numbers – Jones’ lyrics set to William Knowles’ memorable melodies—shift us from the serious action onstage to a more metaphysical, spiritual realm.  Some critics—Mr. Pressley, to name but one – seem to be more comfortable with simplistic, spoon-fed musicals where every song serves the story line.  Jones knows better:  he knows that from its very beginnings, theatre has tried to encompass that vast divide between human frailty and the divine, between the natural and spiritual realms—which, for many of us, exist side-by-side.

It may seem incongruous for a young rape victim to launch into a spiritual number like “Palm of God.” but anybody who’s ever read a Greek Tragedy knows that the original dramatists – Euripides especially—used their musical numbers to take the play’s action and place it in a mythical, universal context.  The very thing that some critics find distracting, in other words, is what actually gives “Blackberry Daze” its power, because it’s what gave Greek Tragedy its power back in its heyday.  Jones’ all-encompassing vision is very much like those of the ancients, and we would do well to let the man do his thing.

Given the broad scope of Watson’s original story, however, “Blackberry Daze” could do with some embellishment.  Far too little is made of the supporting characters here, like Aunt Ginny (a fine turn by Duyne Washington) or Pearl’s husband Willy, let alone Carrie’s ball-playing suitor Simon.  Duane Richards II plays both of these young men, and perhaps more time on-stage would aid us in understanding the differences between these two characters.  I would hope that later versions of this show give all the characters their due; Watson’s Jefferson County, if handled right, can have the same impact as August Wilson’s Hill District in Pittsburgh, and I would hope that Jones considers this going forward.

Sigridur Johannesdottir’s costumes evoke the era of the play perfectly, but a highlight of this production is Robbie Hayes’ projections, which enable the story to shift with ease from one place to the next.  The homage to artists of the Harlem Renaissance, with their exuberant images of the night-club scene, is especially evocative.

A reminder:  finding MetroStage can be tricky, if you’re coming from the city; let your GPS guide you through the strange mix of one-way streets as you enter Old Town, and you should be fine.