Theatre Review: ‘Be Awesome: A Theatrical Mixtape of the 90s’ by Flying V at The Writer’s Center 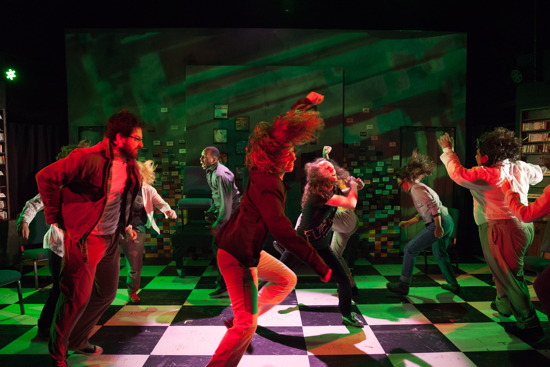 ‘Tis the season for nostalgia, it seems; hipsters of a certain age are flocking to the Avalon Theatre to catch the Beatles documentary “Eight Days a Week” coming face-to-face with the Fab Four’s youth, and their own, once again.

The encounter with one’s past is always fraught with peril because it usually involves acknowledging how foolishly we spent our time, along with the inevitable contemplation of whether we’ve measured up to our youthful ideals.

Packed with action, live music, and a delightfully raunchy sense of humor…

But what about those for whom dreams, and life itself, are cut short?  We who survive our misbegotten youth have the luxury of looking back, but with each passing year, the list of friends who have left us grows longer.  How can you convey the highs and lows of your life to a generation you will never know?

This is the premise behind Flying V Theatre’s latest offering, “Be Awesome:  A Theatrical Mixtape of the 90s.”  The action centers on Jonas Park (the endearing Bob Manzo) whom we follow from childhood to adulthood, from Saturday mornings in front of the boob tube to college hook-ups to a cancer ward in his early 30s.  Jonas, not knowing how long he has to live, tries to sum up his life for his soon-to-be-born daughter by creating a mixtape (cassettes still being a thing, you know).  The tape gives her a glimpse of the highs and lows of his life, through the music that meant the most to him.

One by one, the familiar tunes come on and are used as soundtracks for the cast’s performance of MTV-like videos portraying chapters in Jonas’s life, and the life of his friends.  Gordon Nimmo-Smith has selected a wide variety of tunes, thankfully, reflecting the simple fact that if you’re musically aware, you listen to everything (screw the algorithms, you’re smarter than that).  And it is a treat, as always, to see Flying V’s company performing tunes live and unplugged, led by Music Director and ensemble member Jon Jon Johnson on fiddle.

There is a lot of moving and shaking here, and Ryan Tumulty’s choreography is by turns frenetic and hilarious.  But this is a Jukebox Musical with a difference; given the mania grown-ups have for their hit parade, it’s natural for the millennial generation to follow suit.  But with the specter of death hanging over the action, the effect is more somber and much more emotionally satisfying than your average night of golden oldies.  As Jonas sums up his attitude towards life, “It’s worth it; music makes it better.”

Flying V has come to specialize in a certain brand of 90s nostalgia, and this production features echoes of past productions, even as it rings new changes on a familiar story.  It’s almost a summation of sorts, for a genre of show that has been their claim to fame for several years.  Packed with action, live music, and a delightfully raunchy sense of humor, by turns hilarious and dark, Be Awesome is a loving look back at a life that—the 90s hit parade notwithstanding—should resonate with any generation.

Advisory: Features mature situations—suicide and sex, to name but two—as well as blunt language; so it’s not advisable for younger audiences.

Running Time:  90 minutes with no intermission.

“Be Awesome:  A Theatrical Mixtape of the 90s” runs September 22-October 9; performances are Thursdays through Saturdays at 8pm, with Saturday and Sunday matinees at 2pm. Performances take place at The Writer’s Center, 4508 Walsh Street, Bethesda, MD. For tickets click here.