Theatre Review: ‘I Call My Brothers’ at Forum Theatre 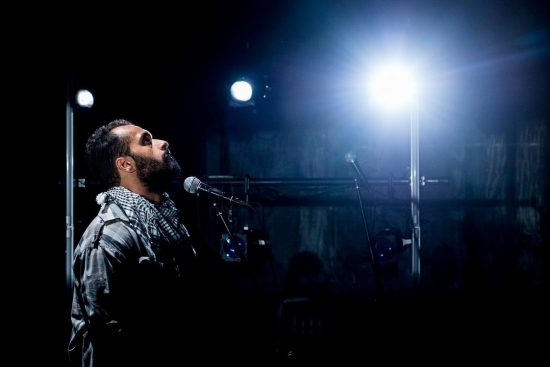 Ahmad Kamal (Amor) in ‘I Call My Brothers.’ Photo by Teresa Castracane Photography.

Society can be a toxic and antagonistic place to exist within; while we like to see the good in it, our existence and others’ are judged at almost any point by others we know, by our cultures and structures that label us, and by how we see ourselves, be it through our own viewpoint or through what we think is our own, but is actually a product of our countless internalizations.  Forum Theatre’s production of Jonas Hassen Khemiri’s “I Call My Brothers” offers a complex take on the paranoia of existence through an exploration of individual worth and internalized racism in the modern world, and offers an ambitious, if unfocused, character, societal, and cultural study.

2:13 AM: A car bomb goes off in New York City.  The next morning, Amor, a young Muslim man, learns he may be a suspect.  Over the next 24 hours, he will be looking both over his shoulder and back at his life as he hopes to make it through the day knowing he is wholly innocent.  As he works to blend in, he constantly encounters shadows of his past that complicate his perception of himself and his community and disillusion him towards what he deems real about his actions, his friends, and his life so far.

Every exchange keeps you focused, attentive, and engrossed…

Ahmad Kamal narrates the play as Amor, framing almost the entire story through his own observations about himself and those he encounters over the course of the day.  The narration is broken up by conversations, largely over the phone, where Kamal and the other actors talk through two microphones on opposite sides of the stage.  The minimalist production design shines, as your eyes are quickly guided by the subtle lighting choices, such as occasional overheads signal a shift to Amor and one of his friends banter with themselves and to the audience about the details Amor is choosing to share or ignore.  Director Michael Dove’s restrained blocking is appropriately immersive.  Every exchange keeps you focused, attentive, and engrossed, as a character movement can suddenly signal massive tonal and aesthetic shifts, particularly whenever Amor calls his brothers to adjust his frame of mind for survival, and the stage literally lights up with conversation.  The shifts and unpredictability only help make the exploration of Amor’s character even more gripping.

In fitting with the play’s focus on surveillance and observation, each conversation has a subjective air to it, with multiple perspectives in the dialogue exchanges and sometimes contradictory commentary, with only the occasional glance into absolute objectivity only being provided by two television screens on the side of the stage that depict past events as characters describe them.  These offer some great emotional turns that are often humorous, but always human, particularly any exchange with Saleh Karaman’s Shavi.  Karaman’s choice of pauses and brief erratic mannerisms transform Shavi from an eccentric smart-aleck into a subtly unstable man clearly repressing just as much as Amor and taking whatever simple, fleeting enjoyment he can find to keep himself in good spirits.  This combined with his and Kamal’s consistent chemistry makes Karaman an absolute show-stealer.

The conversations also create an understandably unreliable narrator in Amor, with special mention going to a sequence between him and Sarah Corey’s Valeria where the two uncomfortably reflect upon Amor’s more disturbing tendencies during a past friendship.  The conceit comes at a cost, however, as some moments may confuse audience members in terms of whether they are to be taken at face value or not, such as one where Amor appears to be monitored by Nora Achrati’s FBI supervisor character.  This sequence ends with Amor doing a surprisingly out-of-character act that conflicts with his sole focus of not blending in, and I could not tell you if he actually does this or if it’s an intentional ruse to shed some more light on his repressed desires.

Towards the third act, this problem becomes more apparent, and as more fantastical events begin to occur, the play loses itself in unforeseeable turns and the appeal of the mystery of the narration had in its established moments of its ambiguity had vanishes, making for a disappointing drop in both pacing and execution only just saved by an admittedly stellar ending.  We understand Amor, but in getting there, we leave behind some of the reality he inhabits, and we come away with little new knowledge or insight on the unfortunate realities that manufacture his fears and paranoia.

While deeply reflective and palpable throughout, “I Call My Brothers” gets distracted in its conceits and squanders some of its more creative decisions and ambitions in favor of revelations of Amor’s past.  I don’t feel it succeeds completely at its analysis of prejudice and many of the decisions I mentioned appear in the first act, such as the televisions, and are never utilized beyond then.  It does, however, make for a very compelling, well-acted, and engaging character study to the point where I would say that if you were to view it strictly as one, errors of the third act aside, it makes the unexpected ending, the imagery in it, and the thousands of implications it hints at more powerful than almost all the rest of the play’s commentary.

“I Call My Brothers” plays through October 1 at Forum Theatre.  For more information, click here.