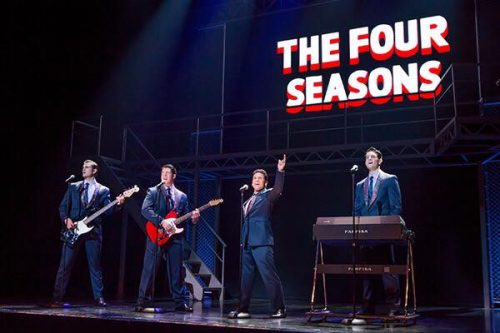 Cast of ‘The Jersey Boys.’ Photo by Jeremy Daniel.

It could have just been a concert that played The Four Seasons’ numerous hits and the audience would have been enthralled. Yet, “Jersey Boys,” kicking off the 2016-17 season as part of the Hippodrome Broadway Series for a limited engagement, is just that—a concert but also with a gritty biographical story that weaves together those fabulous songs and the roller coaster lives of the band members.

This production, as part of a national tour that has been in progress for two years, shines by every measure. It is a cornucopia of nostalgia with its hand-clapping songs that bring those of us who vividly recall that era to eye-welling moments throughout. Had the intervals between many of the numbers and the beginning of dialogue not been so short, the thunderous ovations following those that allowed for applause would have extended the show to four hours.

That should come as no surprise. “Jersey Boys” with music by Bob Gaudio, lyrics by Bob Crewe, and book by Marshall Brickman and Rick Elice has been a Broadway success capturing four Tony Awards in 2006 including Best Musical and a Grammy Award for Best Musical Show Album in 2007. It brings to life the story of the creation of The Four Seasons through its ups and downs—and there were many of them—not unlike many popular musical groups who have experienced huge success but also internal splits, money issues, mistrust, individual tragedies, romantic tensions, and run-ins with the law.

The Four Seasons was among the most potent pop rock groups of the sixties. This despite the fact it had to compete with iconic groups like the Beach Boys, the advent of Motown, myriad superstar solo performers, and the historic British invasion, the band still sold 175 million records worldwide.

The core performers—Matthew Dailey as Tommy DeVito, Keith Hines as Nick Massi, Cory Jeacoma as Bob Gaudio and Aaron De Jesus as Frankie Valli (the October 1 matinee and October 2 evening performance will be played by Miguel Jarquin-Moreland)—are spot on in their vocals and excel in their acting skills. They also replicate the group members’ characteristic dancing moves during their numbers attired in vintage suits and ties designed by Jess Goldstein that add more realism to an already realistic production.

Each member of the group share their own personality, history, goals, values, problems and achievements distinct from the others, which are carried out with supreme excellence.

Two-time Tony Award director Des McAnuff helms this rich, expertly executed production that is divided into four “season” segments with each member of the band narrating their perspective of their own lives as well as the group during their particular season while those wonderful songs are performed.

A “Fifth Season” could have been given to Lighting Designer Howell Binkley, a Tony Award winner for the Broadway production. Mr. Binkley’s creative use of vivid hues to illuminate the stage and on the LED board above and at the rear of the stage is simply masterful.

One of the production’s highlights is The Four Seasons singing on The Ed Sullivan Show during the apex of the group’s success.  Black and white footage of Ed introducing the group: “For you youngsters in the audience, here are The Four Seasons!” shown on the LED board then the group on stage performs “Dawn” with an actual TV camera rolling; their images on the board.  Cleverly, those images cut away to Ed’s audience in full swoon mode and back to The Four Seasons singing.

If that isn’t enough, ultra-bright lights turn on the audience; the group faces the back of the stage giving the illusion that the audience is seated behind the performers facing the TV lights. It’s a crafty, magical moment.

Matthew Dailey is scintillating as bad-boy Tommy DeVito, the guy who formed the group. In addition to his singing and guitar playing skills, he ably conveys the gruff character who has been in and out of jails, plunders the group into debt with a dangerous loan shark, hides unpaid taxes from the group and hits on Frankie’s girlfriend.

Keith Hines does a good job as Nick Massi is The Four Seasons’ bass player. He is the one who helped train Frankie with his vocals.  His role is mostly comedic whereby he adroitly displays dead-pan humor.

As Bob Gaudio, the songwriter and keyboards player who previously experienced success with the hit “Short Shorts,” Corey Jeacoma, is excellent. Driven to write hit songs and delves deeply into his music, Gaudio doesn’t pick up on the band’s troubles. Mr. Jeacoma gets to highlight a strong singing talent in “December, 1963 (Oh, What a Night)”

Then there is Aaron De Jesus as Frankie Castelluccio, the Four Seasons’ lead singer who eventually changes his name to Frankie Valli at the suggestion of his wife, Mary Delgado (Kristen Paullcelli). If you close your eyes and listen to him sing, you’d swear you’re hearing Frankie Valli. Even if you open them, you’d think it was him.  That’s how authentic Mr. De Jesus’ performance is.

Frankie had to cope with keeping the group together, bailing Tommy out of his debt, dealing with marital strife and enduring an unimaginable tragedy. Mr. De Jesus’ acting prowess comes through during these moments while he perfects Valli’s signature vocals.

Barry Anderson is splendid as Bob Crewe, the producer and lyricist for the group. He is campy and flamboyant and the band recognizes he is “a little off” in the manner of Liberace but he delivers the hits.

Other good performances are turned in by the remainder of the company including the aforementioned Kristen Paullcelli as Valli’s first wife and Thomas Fiscella as mobster Gyp DeCarlo.

This production excels in its sound design by Steve Canyon Kennedy, Steve Orich’s orchestrations and Scenic Design by Klara Zieglerova. The latter’s simple set consists of two metallic staircases running up to a scaffold.  However, the LED board in the rear is the destination for a multitude of imagery including cartoon frames that keeps the show even livelier than it already is.

“Jersey Boys” is a thoroughly entertaining masterpiece steeped in nostalgia and wonderful music that reminds us so genuinely of the good old days. Hurry and buy tickets fast before the show moves on to Boston.

Running Time: Two hours and 40 minutes with an intermission.

Advisory: Contains profanity and sexual situations and is not recommended for children.

“Jersey Boys” runs through October 2 at the Hippodrome Theatre at the France-Merrick Performing Arts Center in Baltimore, MD 21201. For tickets, call Ticketmaster at 800-982-ARTS or online  or the Hippodrome .