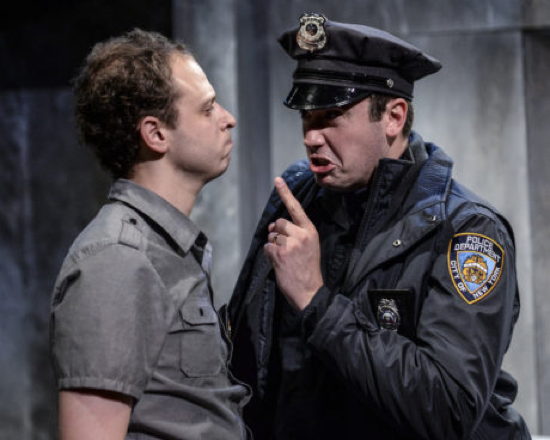 In one of my previous jobs, I walked past the security guard, let’s call him Fred, every morning. Sometimes I would be running trying to get to work on time. Other times, I would be ambling in the lobby, debating whether to get coffee from a nearby Starbucks. But no matter what, every morning without fail, Fred would say hello to me, calling me by name. I usually would say good morning back, would sometimes even ask “how are you?” but I never really stuck around long enough for an answer.

One day I looked up and instead of Fred I saw another person entirely. I asked what happened to Fred, and she told me that he had gotten another job.  Three weeks ago.  I hadn’t noticed I’d been saying hello to someone completely different for three weeks. I wondered how many people had I done this to in my life.

Kenneth Lonergan’s “Lobby Hero,” at 1st Stage, delves into the interior world of one of these people.

In a play that Time Out New York once heralded as “the best drama, best comedy and best romance of the year all rolled into one,” Jeff is a 27 year old self-described “f- up” who takes a night shift job as a security guard of an apartment building. He is finally able to get back on his feet when he gets embroiled with an incident concerning his straight-laced employer, and two cops, one a female rookie and the other at the height of his career. Alex Levy directs this perfect blend of actors, rife with comedic chemistry.

Aaron Bliden stars as the amicable Jeff, whose boredom with his new position launches him into an uncomfortable situation with the people who come through the lobby. Last seen on the 1st Stage stage in “Old Wicked Songs,” his mercurial presence drives the action of the play.  Bliden gives Jeff a tender, youthful energy, culminating in a monologue where Jeff describes to his boss, Williams, his plan for the immediate future and then again when he describes his derision to “bunches of men.”

Justin Weaks makes his 1st Stage debut as Williams, Jeff’s officious but not robotic employer.  Weaks’ Williams is an antithesis to Bliden’s bouncy, haphazard Jeff. Their chemistry is excellent. He performs each action with militaristic precision, but it is when he explains his reasoning behind his choices relating to his brother’s arrest that his sharp edges cut the deepest.

Matthew Sparacino plays the tough-guy cop Bill, very much a member of Jeff’s dreaded “bunches of men.”  Sparacino masterfully fluctuates between lovable knucklehead and something more sinister.  His two most genuine moments couldn’t be more different:  one is his first appearance – an adorable flirtation with Dawn – and the other is his confrontation with Dawn at the end of act one.

Laura Artesi is “Dawn,” Jeff’s pseudo-love interest, who struggles to prove herself as a competent cop. Bill describes her as a “little girl in a uniform.” Artesi delves into the rich depth of the character, creating someone who is at once whole and then broken. Particularly in the scene where she expounds on being one of the only female cops in the New York City Police Department. Her comedic chemistry with Bliden makes their scenes together a joy to watch, and the ending perfectly bittersweet.

Cindy Landrum Jacobs returns to 1st stage as the props designer, having worked as designer throughout the theatre’s existence. Kathryn Kawecki whose designs have been seen all around the New York and Mid-Atlantic areas, designed both the set and the costumes, with a keen eye for detail.  The set could have been a shadow of the soundstage from the Die Hard movies, compartmentalized and dissected like the lives of the play’s characters.

Jane Margulies Kalbfield, a founding artist of the 1st stage who studied with Stella Adler herself, providing dialect consulting for the show. DC artist Mary Keegan, whose work has been seen at the GALA Hispanic Theatre and the Forum Theatre, makes her 1st Stage debut as lighting designer.

How many people do we walk past every day, without giving them a second thought? Do people have inherent potential or inherent “goodness?” When does allegiance come before the law? “Lobby Hero” struggles to answer these questions and more.