Theatre Review: ‘Man of La Mancha’ at The Arlington Players 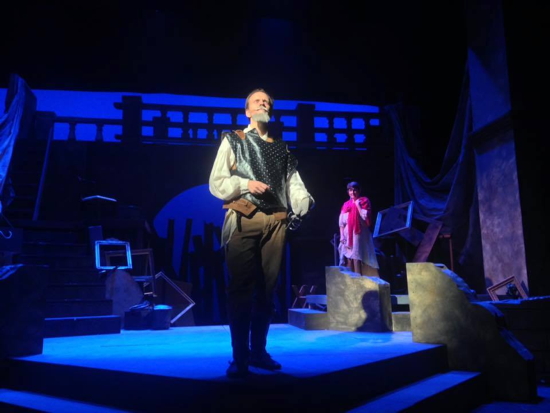 Can I make a confession to you, theatregoer? “Man of La Mancha” is one of my all-time favorite plays, and this production by the Arlington Players reminded me of all of the reasons why!

Directed by Clare Shaffer, “Man of La Mancha,” is a musical version of one the western world’s first and most famous novels: Don Quixote by Miguel de Cervantes. With a book by Dale Wasserman, music by Mitch Leigh and lyrics by Joe Dalton, it tells the story of an imprisoned Cervantes who is charged by a jury of fellow prisoners with being an “idealist, a bad poet and an honest man.” In his defense he plays out the misadventures of Alonso Quijana, who in response to the cruelty of the world has gone mad and dubbed himself Don Quixote de La Mancha, a knight errant.

“Man of La Mancha” is one of my all-time favorite plays, and this production by the Arlington Players reminded me of all of the reasons why!

Hans Dettmer stars as the eponymous Man of La Mancha. He seamlessly transitions between his Quixote and Cervantes, making each character specific and hitting every emotional note with finesse. Moments that were especially engaging were his “Impossible Dream” and his “I have seen life as it is” speech as Cervantes.

Micky Goldstein portrays Quixote’s trusted squire Sancho. This is Goldstein’s third time as Sancho, so you know you’re dealing with a professional! He excels in “I Really Like Him” and “Golden Helmet of Mambrino.”

Melanie Jennings Bales lends her lovely soprano voice to Aldonza, a prostitute and kitchen maid who Don Quixote sees as his sovereign lady, Dulcinea. She especially excels in the comedic moments of the character as in “Dulcinea” and  Sancho’s song “I Really Like Him.”

This show is very much an ensemble piece, as nearly all good theatre must be, so there were incredible performances from each of the ensemble members. Dr. Carrasco/The Duke, played by the incredibly talented Garrett Matthews, serves as the primary antagonist of the show. King’s voice is beautiful, and his comedic timing is perfect. Tom Miranda played the Padre, who is sympathetic to Quixote’s state of mind. His voice is resonant and poignant in his “To Each his Dulcinea” and “The Psalm.” Likewise, the band of Muleteers were all exceptional, particularly in the comedic moments of the show.

In a surprising twist, the usually male part of the Governor/ Innkeeper went to Ivana Alexander, who brings a beautiful voice to “The Knight of the Woeful Countenance.” Quijana’s niece Antonia is played by Becky Babatunde, whose gorgeous soprano contrasts nicely with the character’s comedic physicality in “I’m Only Thinking of Him.” Heather Whitney lends her lovely voice to the Housekeeper but it is her side-splitting performance as the Donkey and the Horse that is truly memorable. Jasmine Jones, as the innkeeper’s sister (in lieu of a wife) milks the comedy of her character. In general, this production brought in more parts for the female characters, after one character is brutally assaulted, the women of the Iinn, including the governor are seen protecting and cradling the character in the middle of the stage.

Jared Davis designed the gorgeously macabre set after the tradition of seventeenth-century Spanish paintings. This dungeon could easily be mistaken for a blighted castle. Sound Designer Drew Moberley added even more depth to the production with the sounds of rats and echoing footsteps. E-hui Woo designed the gorgeous lights, which includes effects like spotlights that draw the audience into the character’s most vulnerable moment and the spinning arms of a windmill!

Director Clare Shaffer puts it best when she said “(“La Mancha”) is about the power of communal storytelling why and how we tell stories and the way they shape the communities we live in… they are what unite us, what drive us and what inspire us to dream.” Especially when that dream is an impossible dream.