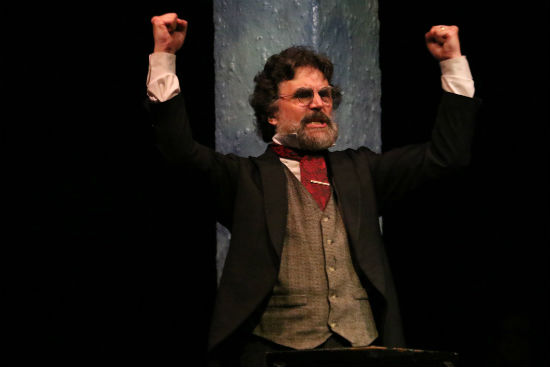 Spotlighters Theatre opens their 55th season with Howard Zinn’s “Marx in Soho” directed by Sherrionne Brown. It comes during the dramatic election season when the nation is in political turmoil. In this one man show, Karl Marx is given the chance to come back to earth from the afterlife to the clear up a few things about his ideas and writings.

Phil Gallagher is 100% committed to the role of Karl Marx.

He tells the audience there has been a mistake and he meant to go to Soho in London, where he used to live, but he ended up in New York.  Despite the mix-up, he is excited to have an audience for his elocution. The play emphasizes that Marx is often taken out of context and that going to one or another extreme does not help anything at all. It seamlessly drops Marx into the modern world. He addresses rampant capitalism and technology and is aghast at how nothing has changed despite “progress.”

Phil Gallagher is 100% committed to the role of Karl Marx. His face and body are expressive of his inner turmoil as well his physical condition now that he is back on earth. Throughout the play Marx references his family and colleagues. Gallagher implements dramatic impressions of people in Marx’s life, especially his wife and Russian anarchist Mikhail Bakunin. When describing their arguments, he fully embodies the essence of his adversary.

Lighting designer Fuzz Roark makes excellent use of space, creating places the set cannot. In one particularly compelling moment, Marx recalls a time he spoke to a throng of people. The stage is dark with one focused light on Marx that expresses both the memory aspect of the speech and the magnitude of speaking to a crowd in an enormous space. Though each moment was well crafted, often transitions seemed just a little too fast to keep the audience comfortably in Marx’s world.

Costume designer Andrew Malone has the seemingly simple task of dressing one man. Malone perfectly embodies the simplicity and style of Marx’s time. But as the play progresses, Marx sheds his coat, and turns up his sleeves; revealing both the simply accurate costuming and the human being behind many writings and agitations.

Scene designer and director Sherrionne Brown conquers the challenge of theatre in the round. The set, though minimal, is thoughtfully deliberate. In the corners of the theatre, walls of photographs and posters bridged the gap between then and now with fluid elegance. Current events don’t seem out-of-place. There is no need address any kind of weirdness on Marx’s part of being thrust into the 21st century. The audience is allowed to assume this occurrence is completely natural. Brown helps the audience to see inside the man about whom many debates take place.

Marx in Soho is at Spotlighters Theatre, for more information, click here.

Maryland native who loves theatre and the written word.