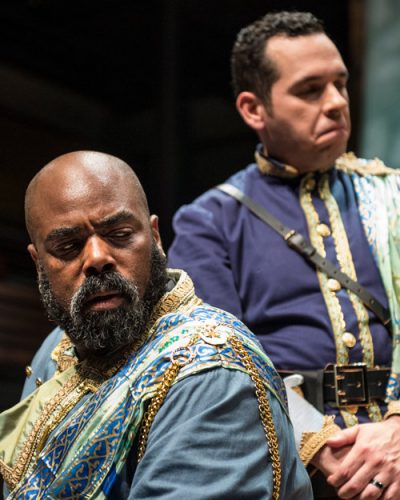 Othello (Jason B. McIntosh) fears his wife is cheating with him because his trusted ensign Iago (Jose Guzman) has planted rumors and lies. Photo by Teresa Castracane.

Founding Artistic Director Ian Gallanar has chosen to direct a powerful and timely tragedy to open Chesapeake Shakespeare Company’s 15th anniversary season. “Othello” is also one of Shakespeare’s plays that the company had yet to tackle. With its not so subtle subtext of race, Gallanar has chosen not to sweep under the rug. But the heart of the tragedy is how jealousy can drag a mighty and noble man into the darkest depths of madness, murder and self-destruction. It has been said that Shakespeare was the first to put the phrase “green-eyed monster’ in print.

The entire cast is strong, well-chosen and does this production proud.

Othello (the larger than life Jason B. McIntosh) is an honorable, black Moor and well-respected general of Venice. He has fallen in love and secretly married Desdemona (the sparkling Diane Curley) the fair daughter of a Venetian senator, Brabantio (Jeff Keough, also great as Montano, the governor of Cypress). Brabantio, who believes Othello has used magic and does not hide his prejudice for the general, appeals to the council. Desdemona testifies to her deep loves for her new husband and the Duke of Venice (wonderfully played by Stephen Lopez) is a strong defender of Othello as a man and military leader.

Othello’s ensign Iago (a brilliant Jose Guzman), is enraged that he has been passed over for promotion by Othello in favor of Cassio (Alex Miletich IV). He plots an intricate revenge against both Othello and Cassio by carefully sowing the seeds of doubt about Desdemona’s fidelity while casting Cassio as the usurper. He enlists Roderigo (the comic crowd-pleaser Elliott Kashner), who is in love with Desdemona and believes Iago is helping him win her heart. Iago even uses his own wife, Emilia (a memorable performance by Briana Manente) who is Desdemona’s loyal lady in waiting and totally unaware of Iago’s schemes. Ultimately his actions spiral into irreversible consequences that culminate in a breathtaking and heartbreaking second act.

The entire cast is strong, well-chosen and does this production proud. But the key is the central triad of actors who are perfectly matched to their roles and to each other. In Everyman’s “Ruined,” a difficult and challenging play about the plight of women in war-torn Congo, D.C.’s McIntosh did beautiful, nuanced work. Here again, he is not only physically commanding but masters the complexities of the many emotions that surface as jealousy takes its grip.

Curley is luminous. There is no doubt of her character’s kindness and love. Her Desdemona is strong but compliant as a woman of her time even in the face of Othello’s harsh indignities towards her as his doubts grow like a disease.

Guzman is simply masterful as Iago. You despise him yet cannot help but admire his skill at manipulation and the many different faces he presents to fulfill his goal. He doesn’t care who he uses and has distain for all. Guzman’s Iago is very physical and theatrical yet totally mesmerizing and believable. He is both the snake and the snake charmer, and at times, surprisingly funny and charismatic.

Daniel O’Brien’s scenic design is simple yet sweeping. Perhaps a visual reference to the many colors of man by building the set is constructed with different colored wood slats. Reaching up to the high ceiling of the theater, it lets the action take center stage. The set pieces are also minimal. His lighting is stylish, utilizing solid swathes of fabric thrown over the balcony. Beautiful patterns are projected onto the cloth, delineating the different settings in the play.

Jacy Barber’s costumes possess an interesting and clever mix of military and middle eastern influences. The uniforms are accented with intricately pattern scarves as sashes. The women’s costumes are lovely, particularly those of Desdemona, layered with color and texture. Barber and Gallanar resist the cliché of a bare-chested Othello for the bedroom scene although Othello’s military uniform with sword firmly attached throughout the play seemed awkward for that intimate and pivotal scene.

CSC has come along way since its inception. The entire cast and artistic team of “Othello” should be very proud to open its 15th season with this fine production.