Theatre Review: ‘Satchmo at the Waldorf’ at Mosaic Theater Company 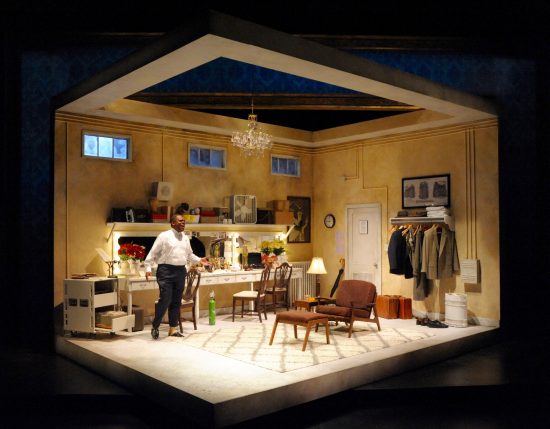 Craig Wallace as Louis Armstrong in Satchmo at the Waldorf at Mosaic Theater Company of DC, August 25-September 25, 2016. Photo by Stan Barouh.

Every public figure has a brand: a carefully shaped, smoothed over, polished up image that, by design, features only the most salable dimension of the person’s character. Then there’s the raw, intricate, often self-contradicting human behind the brand. In “Satchmo at the Waldorf,” written by Terry Teachout and directed by Eleanor Holdridge, the Mosaic Theatre Company fearlessly deconstructs the celebrated, if disturbingly caricatured brand of one of the most beloved American musicians of the 20th Century: Louis Armstrong (nicknamed Satchmo).

Mosaic once again combines all the key elements of quality theater to captivate and move audiences, while holding up a mirror to our community, prompting uncomfortable but necessary conversations.

The play methodically uncovers the genuine Armstrong through the lens of his relationship with his “brand-smith”—the man who shaped Armstrong’s public image, and pedaled it as much as his talent across racial and socioeconomic lines, and into music history. While this historically-based production’s revelations will unsettle audiences and raise important questions about the illusion of racial harmony then and now, its unfettered sincerity and optimism will renew their adoration for Armstrong and the vision of “a wonderful world” that he wouldn’t let die.

The play examines the story of Armstrong’s life from three key angles that capture the breadth of the controversy surrounding his persona, particularly across racial lines. All three are rendered with impressive distinction by Craig Wallace, the show’s lone performer. The most obvious perspective is that of the charming Armstrong himself, offered as a nostalgic backstage reflection, presumed to take place just after one of the last performances of his life, at the Waldorf Hotel in New York City. The second is that of the crude but enterprising Joseph Glaser, Armstrong’s hard-nosed 30-year business partner and manager, who marketed the musician, orchestrated gigs and appearances and accompanied him on tours all over the country and the world. Their friendship was one that each acknowledged as almost familial, yet was complicated by race and money.

The last angle is that of Miles Davis, who represented the next generation of jazz, and ruthless critic of what he believed to be Armstrong’s subservient relationship to his mostly white audiences. Like a magician, Wallace nimbly shape-shifts to channel the essential personality of each character, switching accents, mannerisms, and dispositions. He does this with impressive stamina, commanding the stage non-stop for the show’s full 80-minute run time. Craig Wallace’s portrayal of Louis Armstrong in particular is simply masterful.

Wallace is supported by a glowing set, designed by Andrew Cohen, that is as intricate and period-appropriate as the characters he portrays. A corner of Satchmo’s stuffy backstage changing room juts out from the stage, bringing the audience deeper into the room, and into the conversation with the man himself. Transitions between characters are signaled by subtle lighting changes, coordinated by Alberto Segarra. Brandee Mathies’ versatile costuming helps with this too, accentuating Wallace’s already convincing acting with painless but patent wardrobe tweaks. Not once does Wallace have to leave the stage for a wardrobe change. Costumes also reflect a careful study of both the characters and the time period. The same can be said of the collection of props, managed by Timothy Jones, that Wallace employs throughout the show. Many of these, most obvious among them the cornet, are essential symbols of Armstrong’s greatest lifelong joys and sorrows. Sound by Christopher Baine kept every word—and note—clear and crisp.

“Satchmo at the Waldorf” probes beneath Armstrong’s lovable public persona to reveal the startlingly powerful forces of prejudice and inequality that necessitated it. This revelation alone is a profound gift to a community and world that remain selectively numb to the persistence of those forces today. Equally appreciated is the gift of Armstrong’s unshakable optimism, which remains standing by final bows. Mosaic once again combines all the key elements of quality theater to captivate and move audiences, while holding up a mirror to our community, prompting uncomfortable but necessary conversations.

Running Time: 80 minutes, with no intermission.

Advisory: This production uses graphic language and adult themes and is not recommended for children.

“Satchmo at the Waldorf” plays through September 25, 2016 at the Mosaic Theater Company in Washington, DC. For more information, click here.