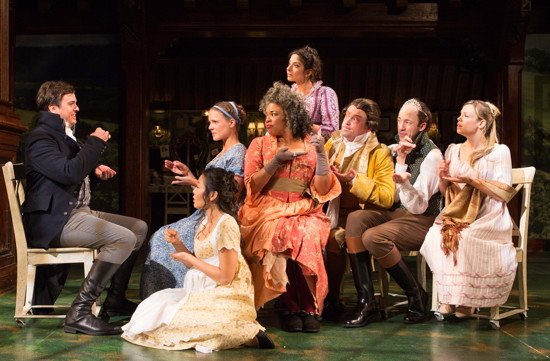 The cast of Folger Theatre’s production of Sense & Sensibility enjoying some tea and a bit of gossip. Photo by Teresa Wood.

The Folger has once again proved its mastery goes beyond Shakespeare. “Sense and Sensibility,” an adaptation by Kate Hamill of the beloved novel by Jane Austen, is charmingly witty and beautifully staged by Eric Tucker.

The story follows the Dashwood family, which recently lost its patriarch during the Regency Era in England. A tough time to be a widowed mother with three single daughters. The eldest daughter Elinor (Maggie McDowell) is the one with the sense. She is smart, reserved, and knows what she wants. She is also desperately in love with Edward Ferrars (Jamie Smithson). Marianne (Erin Weaver), the next eldest is the one with the sensibility. She is passionate and hasty and falls in love with John Willoughby (Jacob Fishel) but is won by the kind yet much older Colonel Brandon (James Patrick Nelson). A time when wealth and status outweighed almost anything else of significance in people’s lives, marrying for love rather than money was not always an option.

…is charmingly witty and beautifully staged by Eric Tucker.

Upon entering the theatre the cast was milling about in their (period appropriate) underwear, talking to the audience, and dancing around to pop music. It was not expected but lightened the mood and set the tone for a truly charming piece that did not take itself too seriously.

The set consisted of several rolling pieces that were used in a quick paced and clever way. It was fun and unpredictable. Chairs came out of nowhere, tree branches appeared, and windows rolled around. Designed by John McDermott the space was used in such a creative way and the location was consistently clear.

Mariah Hale designed costumes that were elegant and allowed for the actors to play multiple characters without having to change. Each actor was dressed in their white under garments at the beginning and gradually added more pieces until they were fully dressed by the end of the first scene or so. It was a clever way to show the actors becoming the variety of characters.

McDowell’s Elinor was mature and composed. She paired well with Weaver’s abounding energy in a way that they seemed like polar opposites yet completely alike. The youngest sister, Margaret, was played by the charming Nicole Kang who the audience could not help but love.

The boisterous Mrs. Jennings, who puts it upon herself to find the girls matches, is played by Caroline Stefanie Clay. Clay captures the meddling spirit of the lady with style and a mischievous grin. The sparkle in her eye rarely goes away and her good natured spirit makes me a stand out character.

Nelson displayed great skill with Colonel Brandon by maintaining his outward poise but allowing his emotions to show through in a genuine way. The Colonel is one of the most complex characters of the story and Nelson was both respectable and loveable in his portrayal.

Lisa Birnbaum switched effortlessly between the compassionate matriarch Mrs. Dashwood and the young and ditzy Anne Steele. Another standout was Kathryn Tkel who changed from Fanny Dashwood, the self-centered sister-in-law, to Lucy Steele, a social climbing girl who is unbearable. Fishel was both John Dashwood, the somewhat gawky and spineless half-brother to the girls, and John Willoughby, the handsome heir to a great estate that oozes charm and gentility.

This was truly an ensemble piece. Rarely did any member of the company have a break, as set pieces needed to be pushed, lines from other unnamed characters needed to be said, animals needed to appear, or any other variety of shenanigans. There was also some dancing, in typical Austen fashion, and fairly intense movement based sections of the story. Alexandra Beller choreographed the ensemble in a way that each section flowed easily into each other.

Anyone can relate to these characters. It has been over 200 years since Austen wrote this story and it still resonates with us not only because she wrote in such a perceptive and witty way, but because she built characters that we know. We are them. All of us are or have been one of these at one time or another.

For more information and to purchase tickets click here.