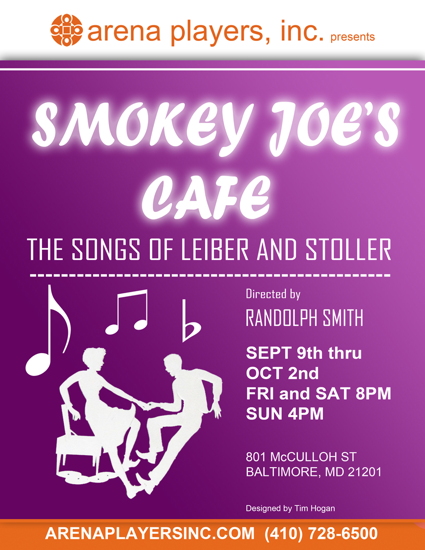 Arena Players bills itself as the longest continuously operating black theatre company in the country.  Now in their 63rd season, this stalwart steward of the black experience presents their production of “Smokey Joe’s Cafe.” While it has some flaws, the overall experience is extremely satisfying and always entertaining.

A jukebox musical, “Smokey Joe’s Cafe” premiered on Broadway in 1995 and went on to run for more than 2,000 performances.  39 songs by the songwriting team of Jerry Leiber and Mike Stoller, these are the songs that are for the most part familiar and in some cases, downright iconic. Recorded by most of the leading artists of the 50s and well into the 60s, the ones attributed to Elvis Presley during his heyday are among the most remembered. This cast does most of the numbers proud.

…the overall experience is extremely satisfying and always entertaining.

The well-designed set by Byron Rogers that evokes a New York rooftop, nicely lit by Charlene Williamson, serves each scene well.  Victoria Jackson’s costumes are suited to the era.  While director Randy Smith might want to tighten some of the gaps between musical numbers, for the most part the show perks along at a good pace.  And Smith is skillful at creating scenes that keep the show from becoming just another concert. Make no mistake, this is definitely theatre.  With no dialogue or plot line, shaping song after song into a story that holds the audience’s attention is a testament to the talents of this cast and the director’s expertise.

With 14 in the ensemble, and close to 40 songs, it’s not possible to single out every single moment but there are definite standouts.  The men were always at their best in groups, as doo-wop good as any street corner ever produced back in the day. With their impressive harmonies, “Keep On Rolling” and “Searchin” were excellent.  The ladies were equally terrific in their pairings as well, and “I’m A Woman” was as sassy and full of attitude as Ru Paul’s Drag Race.  And the songs that included the whole cast, most notably the opening number, “Neighborhood” and the foot-stomping, hand-clapping, rock in your seat finale, “Stand By Me” were fantastic.

Individually, a few performers were perfectly paired to songs that let their personalities and voices shine.  Cherise Caldwell-Brown is a wise and loving mother-figure with a voice that reminded me of Nell Carter.  And when she takes the lead on “Saved,” everybody is going to church.  Hallelujah!  Artartus Jenkins has a voice that fills the theatre and a stage presence that commands attention.  He’s a true performer, part Ring Master, part raconteur and all pro.  And Grafton Gray does an unusual and entertaining rendition of “I Who Have Nothing” that left the audience cheering.

If I have to give the Best of Show (and I could change my mind any minute – the competition is that close), it would be to Vanessa Steward.  There is something about the timbre of her voice that conjures up Audra McDonald, but is totally Ms. Steward’s own.  And she’s funny! “Don Juan” had me giggling no end.

Arena Players has a mission to bring quality, black-centric theatre to Baltimore audiences.  With this production of “Smokey Joe’s Cafe”, they have done just that.