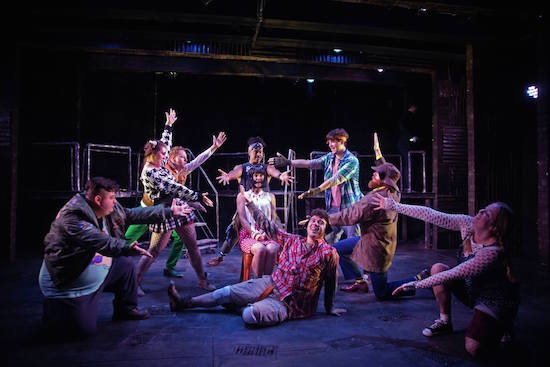 The cast of Urinetown. Photo by Ed Cragg.

Running at SOURCE is “Urinetown: the Musical” directed by Allison Arkell Stockman, a satirical story about a corrupt business controlling the government and law enforcement that is being rioted against by the people. Oh, and it is a musical that knows it is a musical so some things just happen because that’s what happens in musicals.

…a seriously fun night at the theater with a wickedly stellar cast and creative team.

Hope Caldwell (Katie Keyser) has just returned home after attending the Most Expensive University in the World to her father Cladwell B. Caldwell (Nicklas Aliff) who runs Urine Good Company. They control the public amenities, for you see, in this dystopian universe, your private business is always done in a public restroom. On Hope’s way she meets Bobby Strong (Vaughn Ryan Midder), the hero of our story and an assistant janitor at one of the cheapest toilets in town, run by Penelope Pennywise (Christine Nolan Essig). They immediately fall in love and she encourages him to follow his heart. His heart told him to start a revolution so he did. The musical explores ideas of capitalism and socialism as well as corrupt politicians and law enforcement. Because of the times we live in, the police brutality that is what controls the people hit very close to home.

The play rests on the shoulders of Officer Lockstock (Matt Dewberry), a police officer enforcing the law and the shows narrator. His storytelling partner is Little Sally (Jenna Berk) an over-precocious young girl from the rougher side of town. She is the one who challenges Lockstock with the innocence of a child. They make for a hilarious plot device, asking why we do things the way we do.

Dewberry commanded the stage with his larger than life personality and sardonic sort of knowledge of everything that was coming next. He carried the show with a robust laugh and knowing twinkle in the eye. Midder was an adorably charming Bobby whose micro expressions were hilarious. He physically captured some of the awkward poise of the character. It took a verse or so for his voice to warm up in his solo songs but once he got going, Midder’s voice soared with a creamy soulful sound. He partnered well with the Disney princess-like Keyser.

Ilona Kessell’s choreography was brilliant and executed by a very tight ensemble made up of Patrick Murphy Doneghy, Amy McWilliams, Emily Madden, David Landstrom, Valerie Adams Rigsbee, and Rick Westercamp. They were incredibly in sync and genuinely just looked like they were having a great time. The ensemble really shines during “Snuff that Girl” at the beginning of Act 2.

Don’t get it wrong, “This isn’t a happy musical.” It deals with some pretty heavy material in an extraordinarily light way. “But the music is so happy.” It is especially happy if you love some good potty humor.

Little Sally is wrong though. Many people will come see this show because it is a seriously fun night at the theater with a wickedly stellar cast and creative team.