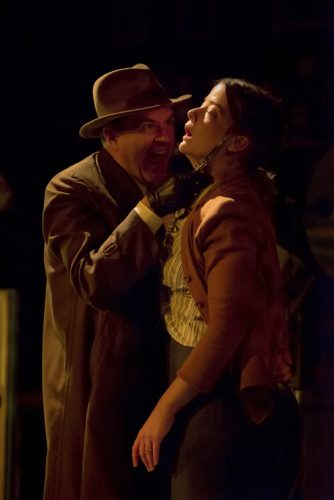 Bruce Randolph Nelson as Roat and Megan Anderson as Susan. Photo by ClintonBPhotography.

Any movie buff and a fan of the luminous Audrey Hepburn is undoubtedly familiar with the 1967 movie starring the actress who was nominated for both an Academy Award and Golden Globe in her role as a young, blind woman in the film “Wait Until Dark.” Terrorized by three con men in search of a doll containing something illegal and very valuable, she matches wits with them to survive despite her disability. In 1966, the doll contained heroin and for the 2013 adaptation, it was diamonds.

The film came out on the heels of the 1966 Broadway version written by Frederick Knott (who also wrote the wonderful “Dial M for Murder”) and it setting was contemporary. In 2013, Jeffrey Hatcher adapted the play with some changes, notably going back in time to Greenwich Village during 1944.  The upheaval caused by World War II also ushered in a new influence in movies brought over by filmmakers fleeing the Nazi regime. It was dubbed “film noir” and the production is imbued with many of its influences.

“Wait Until Dark” is a prelude to what promises to be yet another fantastic season for Everyman.

Everyman Theatre kicks off its 20th anniversary season with the 2013 adaptation of this fun, fast moving thriller. Donald Hicken directs a brilliant cast and production team. Chock full of twists and turns, a formidable villain, and a strong leading lady, the play culminates in one of the most memorable, heart-stopping finales in theater.

The show opens with a corrupt ex cop, Carlino (Todd Scofield), searching an apartment. Not as smart as the mastermind of the gang, Roat, (who will soon arrive on the scene), Scofield plays his role well as the “sympathetic” and maybe all too available police contact. The character also adds part of humor that is sprinkled throughout to balances the suspense.

The incomparable Bruce Randolph Nelson as Roat is deliciously creepy and belongs in the category of a thinking man’s villain. With the aid of a switch blade he has affectionately named “Geraldine,” nothing will stop him. No fault of Nelson’s, the script requires his character to give a talky exposition to set up the background of the story to date. But he does it beautifully and then the play goes into full throttle.

We discover one of the apartment’s residents, Sam, was simply a random innocent. Lisa, a cohort of Roat’s and Carlino’s, slipped the doll into Sam’s satchel (his address tag was in plain view) at the train station with the intention of a double cross and retrieving it for herself. But Roat has taken care of this problem and has come to clean it up. This sets in motion an elaborate scheme to find the doll.

Sam’s wife, Susan, is caught in the middle. She truly does not know where the doll is or its significance. Her husband is removed from the scene with photo shoots that are one wild goose chase after another set up by the criminals. To break her down, Susan is also made to believe that Sam is having an affair.

Blinded in an automobile accident, Susan (Megan Anderson) met her husband, Sam (Arturo Tolentino), a shell-shocked war photographer, while they were both in the hospital. Happily married, they live in this brownstone basement apartment in the Village. Two, large windows with blinds reveal the world outside looking up to the street level and are done in wonderful detail as is the entire set by Daniel Ettinger. The blinds will become an essential part of the plot, as will the icebox (refrigerator).

Sam is helping Susan to become as physically independent as possible­ — “the world’s champion blind woman,” but it is apparent that she was always a bright, funny and capable woman. Megan Anderson does her usual superb job in the role. Susan other senses have become heightened and will serve her well. She aided in practical tasks such as grocery delivery by a bratty, awkward teenager (a very good Shannon Hutchinson from the Baltimore School for the Arts who alternates the role with another BSA student, Ui-Seng Francois). The girl lives upstairs with her mother, and is kicked out of the apartment whenever one of her mother’s men friends comes to visit. Though she is sullen and sometimes acts out with Susan, she will ultimately rise to the occasion to help her.

In Sam’s absence, his wartime buddy, Mike, (an excellent Eric M. Messner) makes a surprise visit while on leave. He is a much welcomed knight in shining armor and helps Susan as the criminals weave a complex web of deception to attain the doll. She is not only intelligent but much more attune to her environment, ultimately fighting back on her own terms. One of the disadvantages of being a fan of the film is that the shocker the ends Act I is no surprise. It was, however, was a pleasure listening to the collective gasp of the audience.

As in film noir, the use of light plays a major role in the play and is most crucial in the final, suspenseful scene when the theater goes completely black. We see (or don’t see) the world the way the main character Susan does. Lighting designer Jay A. Herzog does a masterful job at creating the mood, including the sliver of light beneath the apartment door and other crucial lighting effects. His skills are complemented by the clever sound design by Patrick Calhoun. We hear the ticking of the clock, street noises and people walking up the steps into the apartment building and “noir-ish” music punctuates the suspense as it would in film. Costume designer Ben Argenta Kress captures the costumes of the WWII era perfectly.

Everyman Theatre is one the finest and most consistent theatre companies that can be found anywhere. They never disappoint. “Wait Until Dark” is a prelude to what promises to be yet another fantastic season for Everyman.