1. Man of La Mancha at The Arlington Players.

“‘Man of La Mancha’ is one of my all-time favorite plays, and this production by the Arlington Players reminded me of all of the reasons why!” – Stephanie House.

Synopsis: Imagination and story telling take center stage as a beautiful score and fantastical adventure abound. Dream the impossible dream with Cervantes, as he pulls us into the world of Don Quixote. 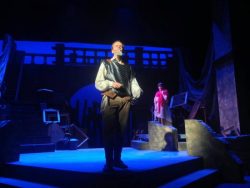 2. Sense and Sensibility at Folger Theatre.

Synopsis: Reason and passion collide in Jane Austen’s beloved tale of sisterhood and romance. When sudden financial straits force the Dashwood family to move to a distant cottage, sisters Elinor and Marianne become ensnared in heart-wrenching romances. Directed by Eric Tucker (The Wall Street Journal’s 2014 Director of the Year), this all-new production of the critically acclaimed play is produced in conjunction with the Folger Shakespeare Library exhibition Will & Jane: Shakespeare, Austen, and the Cult of Celebrity (August 6 through November 6, 2016). 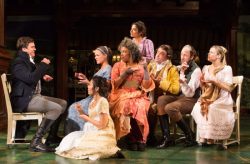 The cast of Folger Theatre’s production of Sense & Sensibility enjoying some tea and a bit of gossip. Photo by Teresa Wood.

“All in all, the musical is just holy fun.” – Pamela Steinik.

Synopsis: Sister Act tells the hilarious story of Deloris Van Cartier, a wannabe diva whose life takes a surprising turn when she witnesses a crime and the cops hide her in the last place anyone would think to look—a convent! Under the suspicious watch of Mother Superior, Deloris helps her fellow sisters find their voices as she unexpectedly rediscovers her own. A sparkling tribute to the universal power of friendship, Sister Act is reason to REJOICE! 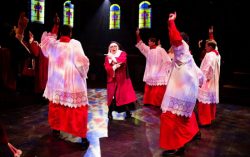 “It is funny and touching and just plain sweet.” – Elle Marie Sullivan.

Synopsis: Trixie and her father bustle through the streets of New York City down the block, across the park, past the school, to the Laundromat. But returning home, Knuffle Bunny is gone, and Trixie can’t tell her father what’s wrong.

“The entire cast is strong, well-chosen and does this production proud.” – Lynne Menefee.

Synopsis: Othello is a monumental and searing tragedy, with a plot driven by the destructive forces of power, pride, revenge, and prejudice. Written in about 1603, Shakespeare’s tale follows the rise to prominence and marriage of Venice’s  army general, a Moor lauded for his military prowess and service to the city. He elopes with Desdemona, daughter of a nobleman; her father disapproves. Othello has arrived, however, he is never allowed to feel fully accepted. Tensions mount when Othello’s trusted ensign, Iago, is passed over for a promotion and responds with calculated wrath. 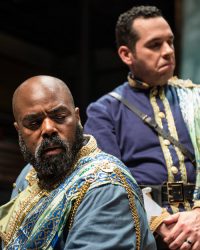 Othello (Jason B. McIntosh) fears his wife is cheating with him because his trusted ensign Iago (Jose Guzman) has planted rumors and lies. Photo by Teresa Castracane.