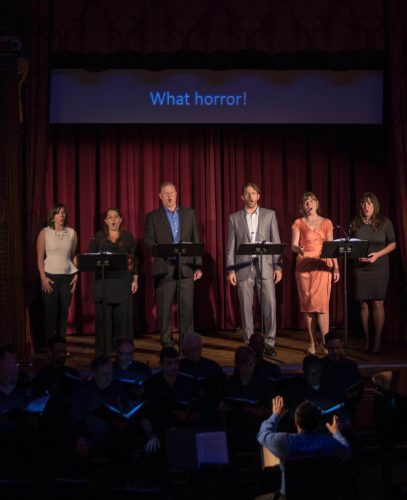 Women playing the roles of men, not one but two possible endings all set in one of Charm city’s most elegant and historic areas. As a first-time concert operagoer, it will not be my last!

On September 30th “Rossini’s Tancredi” played out at the Baltimore Concert Opera and Southwest Opera.

From the history outside this Mount Vernon location to the opulence of the interiors it is an unforgettable experience, a hidden gem in the heart of the city.

…glorious music and a compelling story…

The Baltimore Concert Opera is celebrating its 8th season. A Concert Opera is a full-length opera presented with soloists, often a full orchestra, chorus, and conductor. There are no sets, costumes or props to distract from the focus of the music and the performers.

After a pre-opera lecture by Maestro Anthony Barrese, the audience shares the room with an all-male chorus accompanied by Michael Dauphinais on piano.

Throughout the Opera, there are supertitles on a screen set above the performers. This helps the audience follow along with this emotional story.

“Tancredi” is based on a play by Voltaire and first premiered in February 1813 Venice.

The drama unfolds around the beautiful Amenaide, who is caught in the middle of the politics of the men in her life. Her father Argirio, Tancredi, the man she loves, and Orbazzano the man to who she is betrothed.

Amenaide, played by Lindsay Ohse brought her passionate and at times tragic story to life through glorious music and a compelling story with each beautifully executed song. Making her debut at the Baltimore Concert Opera Ohse’s performance was impeccable, telling her story with her voice and her facial expressions.

Johnson, a mezzo-soprano plays a ‘pants’ role. What does that mean? It’s a woman playing the role of a man, something that is not uncommon in Opera. Cherubino in Mozart’s Marriage of Figaro was a very famous ‘pants’ role.

The ‘pants’ role is easy to comprehend being brought up in the United Kingdom with a musical performance known as pantomime. The heroes and villains are traditionally ‘pants’ roles.

Johnson is captivating in her role as Tancredi. As she sings the words, “I burn with rage,” you can rule feel the passion from this performer.

While Amenaide’s father Argirio and Orbazzano, the man betrothed to Amenaide towered above Tancredi in size, Johnson’s voice, charisma, and dedication to her role stood out through the entire performance.

Alexandra Rodrick played Roggiero, Tancredi’s chaperone. Not an easy task playing alongside Johnson, a dynamic performer. However, Rodrick, a Maryland native shows her vocal skills are up to the challenge.

Amenaide’s father, ‘Argiro’ is played by Heath Huberg, he looks very young to be cast in this parental role, but played it with confidence.

The 16 strong male chorus gave the opera the final touch in making this performance a pleasure to attend.

The most difficult part of writing a review is not to give away the ending. No spoiler alert here, there are two endings. Intrigued?