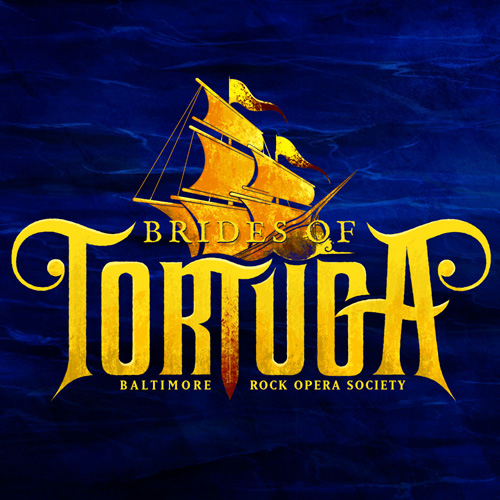 The promotional image for “Brides of Tortuga” at the Chesapeake Arts Center.

It became obvious upon arriving at the Chesapeake Arts Center that this wasn’t going to be a standard night of theatre. The front of house staff are all dressed as pirates, with some outside the theatre performing palm or tarot readings while another did poi dancing with plastic hooks at the end of chains. Inside there is a bar serving beer and rum drinks, as well as a merch booth. To the side is a large picture frame that people can be photographed in, the name of the show proudly displayed. The whole scene has the feeling of a party, with the Baltimore Rock Opera Society as gracious and entertaining hosts. Drinks are brought into the theater and the audience is informed that the bar will be open throughout the performance and are encouraged to feel free to slip out to get refills. After highlighting a cast substitution due to injury and some general announcements and acknowledgments, the lights dim and the show begins.

“Brides of Tortuga” is the eighth original production by the Baltimore Rock Opera Society. The show begins in Calais, France in the 17th century. Charlotte, a former revolutionary turned freedom fighter, overhears a captain bragging to his crew about a contract from the king to bring women to Tortuga to be used as wives and prostitutes against their will. Killing the captain and fighting off his crew with the help of the barmaid named Mary, Charlotte, calling herself Lott, reveals that she intends to free these women with the help of her all-female crew. Mary reluctantly joins, wary of Lott’s bloodthirsty approach. However, while freeing the women an alarm is raised, and Lott determines that the best way to escape is to steal the ship and sail for the open seas, to head to Tortuga and free other women who might be trafficked as well. As they flee, the king sends ships to stop them, led by a man named John who shares a personal history with Lott.

… a wonderfully ambitious labor of passion, attempting something much more epic than most community theatres would dare.

The cast handles itself very well. Lott, played by Emily Classen, carries herself with a stage presence and charisma that makes it entirely believable she can lead a group of pirates in the face of a king. Mary, as portrayed by Rachel Reckling provides a strong counterpoint to Lott, just as passionate but more compassionate. She is capable of fighting, but chooses not to, preferring to protect and defend instead of attack. The two strong personalities and their conflict drives the show forward, giving tension to their ship even when they aren’t fighting for their lives. While almost every character gets at least a moment to shine or a line to sing by themselves, the next meatiest role easily goes to Matthew Casella’s portrayal of John. Not only does he get several songs, but throws himself into them fully, giving a character which could be viewed as strictly villainous as a complex, conflicted antagonist who takes no joy in what he believes he must do. The rest of the cast helps bring the show to life with excellent physicality, be it swaying with the ship or miming using a needle and thread to darn a cloak. Smaller roles which would normally seem lost in the ensemble feel unique and fully formed with relationships and personalities.

Unfortunately, the show was hampered by several audio problems throughout the night. The band was placed in front of the stage, and while they sounded amazing they consistently were much louder than the singers unless the entire chorus was singing together. This was especially frustrating because, in the moments where the sound balance seemed to work properly, the combined work of the vocalists and the band were fantastic, such as in the titular song directly after Lott and her crew decide to sail for Tortuga.

The set was very impressive. While for most of the show it stood as the deck of the ship, parts of it would rotate and open to reveal other locations, from below deck to the dressing room of the King of France. Even better are the occasions when another ship pulls alongside, moments which elicited cheers from the audience. Full credit goes to Joey Martin for a very cleverly designed set, and to Garrett Bladow and his crew for assembling it. It was much more complicated than you often see in volunteer-based organizations, and their hard work shone through.

The lighting design, done by Chris Allen, does a wonderful balancing act between straight theatre and a rock concert, with automated tracking devices throwing beams of light around the space. However, special commendation needs to be given to Chris Reuther and his team for their phenomenal shadow puppet design and use. The show utilizes some incredible projection work, and the intricate, beautiful shadow puppets stand out whenever they are used. Even without the shadow puppets, the projections are well done throughout, whether showing a stunning night sky or in a particularly clever use of a live-feed projection towards the end of the show.

At the end of the night, “Brides of Tortuga” is a wonderfully ambitious labor of passion, attempting something much more epic than most community theatres would dare. While parts of it may falter due to technical problems, what is there remains a feast for the senses. The Baltimore Rock Opera Society is genuinely a creative powerhouse, and it will be exciting to see what they do next.

Running Time: 2 hours and 15 minutes, not including a 15-minute intermission.

“Brides of Tortuga” plays through November 12, 2016, at the Chesapeake Arts Center in Brooklyn Park, MD. For more information, click here.