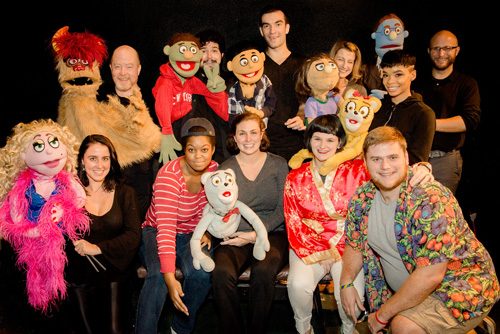 Vagabond Players continues its 100th season in the company’s lovely renovated theater with the Broadway award-winning musical, “Avenue Q,” under the clever direction of Eric C. Stein. In 2003, the show hit the trifecta at the Tony Awards with wins for Best Musical, Best Score (Music and Lyrics by Robert Lopez and Jeff Marx) and Best Book (Jeff Whitty).

Though written over 13 years ago, the musical’s themes are as timeless and even more relevant today for young adults making their way in the world with all of its uncertainties and anxieties. The story centers on a recent college grad searching for his purpose in life (and a job).

…a laugh-out-loud evening of great theatre.

This song-packed and fast-paced musical is unabashedly politically incorrect and hysterically risqué ­– and definitely not for young children. The musical takes its inspiration from the beloved children’s program Sesame Street, the award-winning bulwark of PBS (before unfortunately moving to HBO), with the iconic characters created by the late Jim Henson. The catch here is that the actors operate their puppets in full view and this immensely talented cast is able to fully disappear into their “muppet-like” characters.

Princeton (Jim Baxter), a newly-minted college graduate (“What Do You Do with a B.A. in English?”), moves into a shabby New York apartment building run by none other than the grown up, ex-child TV star Gary Coleman (Taylor Washington) as the super. The neighborhood is populated by many interesting characters who will impart lessons to Princeton as well as to each other. Issues such as prejudice, sexual orientation, and love are all addressed with a keen, satirical eye.

Princeton meets roommates Nicky and Rod (modeled after Bert and Ernie). Rod is an uptight, Republican banker who is having difficulty admitting he is gay. His straight roommate, Nicky (handled by two actors – puppeteer/puppet builder Michael Paradiso, voicing the character, and Ryan Gunning) is very accepting (“If You Were Gay”), but a bit of a slacker.

Other humans residing on Avenue Q are a Japanese therapist with no clients, Christmas Eve (Emily Boling), engaged to a would-be comedian Brian (Michael McGoogan MacKay). The two actors are soon to be wed in real life.

The world is here is divided into monsters and humans with prejudice towards monsters. Kate Monster (Aimee Lambing) is a sweet, kindergarten teaching assistant who dreams of starting a “Monstersori” school for young “people of fur.” One of the many showstoppers is the song “Everyone’s a Little Bit Racist” sung by Gary Coleman, Princeton, Kate Monster, Christmas Eve and Brian.

Kate Monster falls hard for Princeton who soon falls for her. To stir the pot are the Bad Idea Bears (Linae’ C. Bullock and Ryan Gunning, who also brilliantly voices Kate Monster’s boss, Mrs. T). The eternally cheerful bears pop up here and there like evil angels, putting very bad decisions into the heads of the Avenue Q residents and causing all kinds of mischief.

Everything seems to fall apart for almost all of the characters but like every good musical, it all works itself out in the end. Many lessons are learned, lovers and friends are reunited and the gang pulls together for an unselfish cause. The characters have realized that life is an ever-changing journey and to enjoy its moments in the inspiring final song “For Now.”

A big hand goes to the artistic and production team. Joel Selzer does double duty as the Lighting and Set Designer, with a playful and colorful set. He uses a screen atop the roof of the apartment building that acts as a billboard and TV screen, projecting animated words and numbers that are part of the story and another visual device taken from Sesame Street.

Even though it’s a community theatre, Vagabond’s “Avenue Q” is as professional as theatre gets and the entire cast is bursting with talent. So run down to Avenue Q, or rather South Broadway in Fells Point, for a laugh-out-loud evening of great theatre.