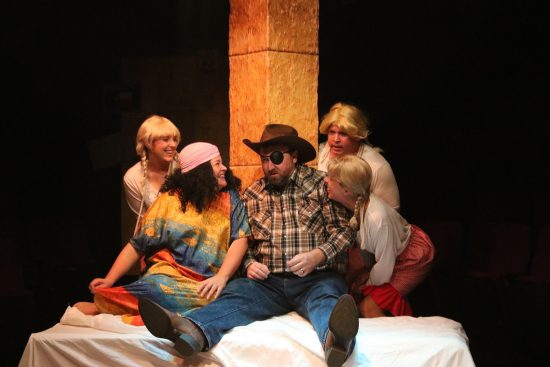 Every now and then, somebody will get an idea of how to make one of the classics more palatable to the great unwashed masses.  Think the retelling of ‘Romeo and Juliet’ as ‘West Side Story.’ Audrey Herman’s Spotlighters Theatre throws its cowboy hat into that ring with a production of “Das Barbecu,” a reimagining of Wagner’s Ring Cycle, the 16-hour opus opera.  With a book and lyrics by Jim Luigs and music by Scott Warrender, this production is a finger-lickin’ good time.

Spotlighter’s production of ‘Das Barbecu’ is an in-your-face farce of epic proportions.

I’m not sure how to summarize the complicated plot in just a few sentences, let alone give the appropriate nods to Wagner, Lord of the Rings, Tolkein and all that, but I’ll give it a shot. It all takes place in Texas, where everything is bigger.  There’s this rich guy who’s obsessed with acquiring a magical ring, there’s another guy who’s kind of an evil dwarf and his dim-witted son who want it, they both get their kids involved in trying to either get it or get it back from one or the other.  There’s a wedding arranged by one of the guys using trickery and drugs (still about getting the ring), a wife, a mistress, some river maidens, a couple of giants and more than a handful of other wacky characters.  32 characters in all. Oh, and they’re all played by five great actors.

Director Gregg Bell has masterfully coordinated this fast-paced farce. While opening night had a few issues that will most likely be worked out as the run continues, it is nonetheless a testament to the sharp eye and skillful direction of Bell that this complicated romp runs at top speed most of the time.  He’s allowed his cast to go big and the results are all over every scene and song.

Michael Tan has once again helmed the pit band and directed the music, serving the complicated harmonies with his usual deft hand. Alan Zemla used every inch of the small stage and the ramps that lead to it to construct a satisfying set that fits each scene well, where they are well-lit by Al Ramer.  Andrew Malone and crew costumed the cast delightfully in whimsically appropriate garb.  Jillian Bauersfeld and Bell added just enough choreography to fit the songs without upstaging them.  And let’s give a huge shout-out to the dressers and running crew who managed the quick set and costume changes like a well-oiled pit crew at the Indy 500.

All the actors are outstanding at switching their characters from scene to scene, playing no less than four and as many as eight characters each.

Andrea Bush has played enough characters in her 30-plus years on stage that switching from character to character is handled seamlessly.  This seasoned pro becomes so many people who it is dizzying and delectable to watch.  “Making Guacamole,” “A Little House for Me” and “A Ring of Gold in Texas” are her best musical numbers.

Jim Gross tackles everything from the scheming land owner to the narcoleptic dim-wit in fine, Texas style.  “River of Fire” shows off his vocal skills nicely.  Allison Comotto is hysterical in scene after scene, with a powerful belt of a voice.  She is equally matched vocally by Clare Kneebone, and when the two of them get together for “Barbecu for Two” they are slap-your-knee funny.  Rounding out the cast is Rob Wall, who tackles each character with what I’d swear is an absolute twinkle in his eye.  Mighta’ been the lights, but I think it was the actor’s skill. When he teams up with Comotto  and Kneebone as the Norn Triplets, complete with dirndl dresses and blond pigtails, he’s a hoot and a half.

I’m no fan of Wagner, but I am a fan of good theatre.  Spotlighter’s production of ‘Das Barbecu’ is an in-your-face farce of epic proportions.  Two-step on down to see it!