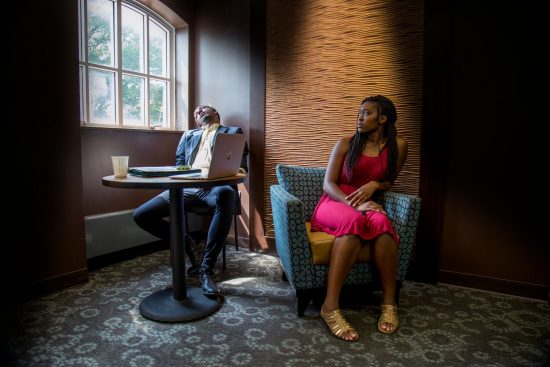 Every hump day needs a good laugh. Great one-liners and a description of wearing a thong that will always make me chuckle.

“Dead Man’s Cell Phone” played out on October 5th at McDaniel College in Westminster. After a little confusion and lack of guidance as to which auditorium I was heading for, I took my seat for this risible play.

… a humdinger of a character with quirky one-liners and quick wit..

Directed by Tad Janes and written by Sarah Ruhl “Dead Man’s Cell Phone” is described, as an ethereal comedy, and the script didn’t disappoint. This cast of amateur performers, students at McDaniel College held my attention with their energy, humor and their ability to keep a straight face through some bizarre moments.

In a world where we rely on cell phones heavily, this play is a light-hearted and humorous look at the obsession we have with our digital companions.

Antoinette Martin plays Jean, a good-hearted young girl who realizes the annoying, loud, constant ringing of a cellphone in a café belongs to a dead man, Gordon. Martin sets the comedy level from the start by chastising Gordon for not silencing his phone, only to realize he is slumped at a café table, dead.

No spoiler there, the title gives it away. Jean then sets out on a mission to make sure everyone in Gordon’s life finds peace with his death assuming her new role as his friend and colleague.

Brandi Weyers plays Gordon’s mother Mrs. Gottlieb, a humdinger of a character with quirky one-liners and quick wit. Weyers plays the role of a much older woman very well with great stage presence. Najee Banks plays Gordon with great confidence, dead and alive. In the second act, he gets to relive his last day, sending the audience away with the message, live each day as if it’s your last, as one day it will be.

There are lots of references to Gordon’s profession in the first act. His family questions young Jean as she claims to be a work colleague. “Are you incoming or outgoing?” To cover her tracks, she said “incoming” in the second act his unusual and morally questionable career path is revealed.

Young Jean keeps Gordon’s phone throughout the play, claiming that she will answer the phone forever, just in case a childhood friend calls and haven’t heard about Gordon’s demise.

Jen Shillingsburg plays Hermia, Gordon’s widow who after a few too many martinis reveals some intimate and hilarious details about her love life. This was one of my favorite scenes, Shillingsburg plays the drunk widow well, showing more emotion for her husband’s career path than the actual loss of her husband.

Ira Domser, a McDaniel College Faculty Staff member, went for a minimalist approach to the set design, that worked well. The ensemble created scene changes and movement using moments of well-lit silhouettes. The Light Design is the work of Moises Miguel.

I wasn’t convinced at times that the music was in the right era considering the focus on mobile technology and our reliance on it in today’s world.

You would be wise to check twice that your cell phone is off during this play as the cast and lighting rely heavily on ringing phones as sound cues. While at times the audience is encouraged to participate, you don’t want to become part of the action.

There is some colorful language in the play that may not be suitable for a younger theater-goer.

“Dead Man’s Cell Phone” runs through October 8th at McDaniel College, for more information you can check the website here.