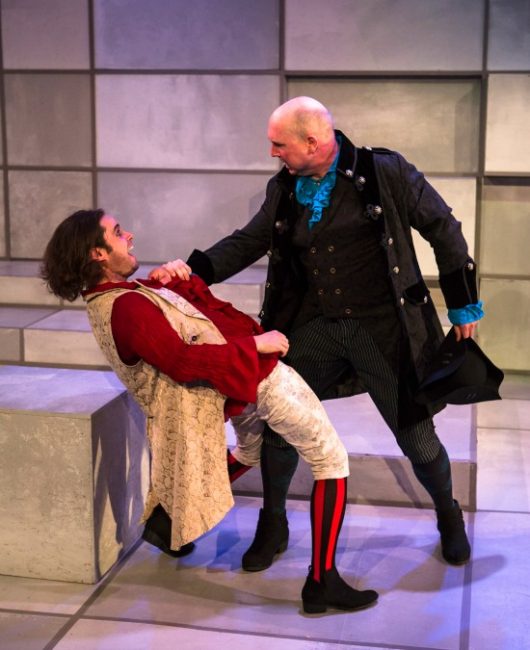 Robert Bowen Smith as “He” (left) and Ian LeValley as “I” (right) in Spooky Action Theatre’s production of “Rameau’s Nephew”. Photo by Tony Hitchcock.

“Rameau’s Nephew,” translated and adapted by Shelly Berc and Andrei Belgrader, after Denis Diderot’s “Le Neveu de Rameau,” is an imaginary dialogue between “I,” The Philosopher, and “He,” Rameau, Nephew of the famous French composer and theorist Jean-Philippe Rameau. The Philosopher, “observing all, speaking to none” likes to walk alone in the Palais-Royal Garden. He regards other people with an equal measure of curiosity and disdain, amusement and condescension. At a nearby cafe, He encounters Rameau, an eccentric musician in whom he has taken an interest.

In the Spooky Action Theatre production, Ian LeValley is our narrator “I,” while Robert Bowen Smith, the exuberant and erratic provocateur, “He.” LeValley is engaging from the very opening moments, masterfully drawing us in, while Smith moves comfortably between unnerving, irritating, and amusing as needed, almost directly channeling Mozart from Peter Shaffer’s “Amadeus.”

There is absolutely nothing mediocre in Spook Action Theater’s production, and plenty that rises to the level of genius.

Much of “Rameau’s Nephew” concerns itself with a broad discussion of genius, in contrast to mediocrity, also suggesting the possibility of a middle ground wherein the innovations of a genius (they are always singular, and always male in Diderot’s dialogue) can be adapted, and exploited by the non-genius. There is absolutely nothing mediocre in Spook Action Theater’s production, and plenty that rises to the level of genius.

Giorgios Tsappas’ deconstructing set-construction is brilliant. As the dialogue begins to unravel, pulling apart the closed, misanthropic, world of logic The Philosopher inhabits, Tsappas’ grey checkerboard box is also forced, beaten and knocked apart, both heightening and then transforming the intimate, claustrophobic, performance space. This deconstruction reveals the colourful world beyond, embodied by Brittany Shemuga’s exultant lighting. The effect is beguiling. Erik Teague’s costumes have a similar sensitivity and invention, taking on the allegory of the colours. Teague uses Diderot’s Enlightenment France as his main inspiration, but allows contemporary elements to offset this and enhance the otherwise abstract and timeless surrounds.

Richard Henrich’s direction is also extremely assured. “Rameau’s Nephew” is a very dense script, with little traditional action or drama inherent, and yet, or perhaps because of this Henrich and his creative team go to great lengths to alleviate this sometimes overwhelming aspect of the script.

There is absolutely nothing mediocre in Spook Action Theater’s production, and plenty that rises to the level of genius.

And it is certainly a rich and interesting text, both within itself and in its broader impact. It was written by a significant historical figure, a genius, in fact. Writers and thinkers as diverse as Goethe and Marx read “Le Neveu de Rameau” and enthused over it. There is even a moment where it seems as if Rameau is quoting Freud until one realizes the words in Rameau’s mouth had to be written almost 100 years before Freud was even born. Freud read “Le Neveu de Rameau” too, more than once.

While Shelly Berc and Andrei Belgrader have adapted the work into a play, it is not entirely apparent if there was ever any intent for the original to be staged rather than read. The decision to stage it might make it even more revolutionary, accidentally and retrospectively creating an antecedent to 20th century absurdist writers like Beckett and Pinter, though it seems to lack the intention and dramatic instinct of these writers. Diderot did write plays, as well as theorizing about drama, but he also wrote ‘philosophic dialogues,’ and in many ways “Rameau’s Nephew” plays like a philosophic dialogue.

That “Le Neveu de Rameau” was written as a dialogue does not necessarily make it into a play, and it seems a truism to note that while plays have dialogue, dialogues are not necessarily plays. But here, as elsewhere, Diderot throws the first punch, appealing to audiences as the true mediators “no matter what the critics say,” so I encourage you to get along and have your say. “Rameau’s Nephew” gives you plenty to think about and for that reason alone is an interesting theatrical experience. Spooky Action Theater have done wonderful work, with a piece that has always been, and remains controversial, though perhaps for different reasons now.

“Rameau’s Nephew” gives you plenty to think about and for that reason alone is an interesting theatrical experience. Spooky Action Theater have done wonderful work, with a piece that has always been, and remains controversial, though perhaps for different reasons now.