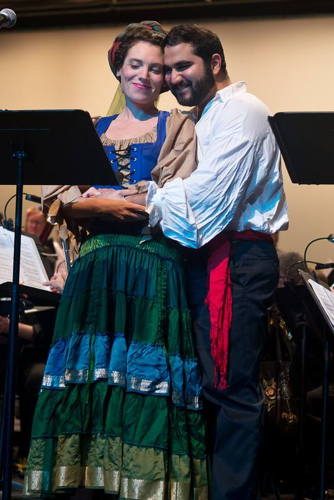 A cacophony of notes filled the theatre as the orchestra tuned their instruments. Six music stands with microphones stood downstage. The instruments gleamed in the red projection light, and the title of the opera was displayed on a screen above it all. The Victorian Lyric Opera Company’s (VLOC) rendition of Michael William Balfe’s 19th-century opera “The Bohemian Girl” was about to begin.

With the Polish military all but defeated and the Austrian army closing in, Thaddeus (Rishabh Bajekal), a Polish soldier, hides among a clan of Gypsies. Then, stumbling upon a wild deer about to trample a child, Thaddeus saves the young girl who, unbeknownst to him, is the daughter of Austrian Count Arnheim (G. Stephen Stokes). At the feast the Count holds in Thaddeus’ honor, old ethnic rivalries are stoked and the Gypsy Chief Devilshoof (Bennett Umhau) abducts the Count’s daughter Arline (Alexandra Friendly). As the years pass Thaddeus’ growing love for Arline competes with his guilt over hiding her heritage. When Arline displeases the Queen of the Gypsies (Denise Young) it is only a matter of time before the secrets begin to spill.

…each of the featured cast members had polished, well-trained voices that complemented each other in every duet.

Although VLOC’s production of “The Bohemian Girl” was performed in a staged reading format, Director Deborah Grossman and Music Director Joseph Sorge both found ways to bring it to life. Each of the characters, including some of the chorus members, had costumes and some props, and the lighting changed with the scene to make up for the lack of scenery. Forest scenes took place against a green screen, which shifted to yellow for daylight and lilac for night.

The orchestra featured musicians across a range of ages and grounded the show. Furthermore, each of the featured cast members had polished, well-trained voices that complemented each other in every duet. However, Alexandra Friendly (Arline) was the strongest vocal talent by far. Not only did Friendly hit all her notes smoothly and powerfully, she enunciated each of her words perfectly, carrying the story through her songs.

A few cast members were also memorable in their acting. Rishabh Bajekal (Thaddeus) sold the sweet sincerity of his character’s love for and devotion to Arline, while David Merrill (Florestein) showed control in his restrained portrayal of the Count’s petulant, immature nephew. Finally, Bennett Umhau (Devilshoof) focused on physical acting to help portray his character, a refreshing change for a performance whose crowded stage somewhat limited the actors’ movements.

Unfortunately, some parts of “The Bohemian Girl” were difficult to hear. The bass and tenor in the chorus, at times, drowned out the female vocals, and the harmonies sometimes were lost. The orchestra, while beautiful, overpowered many of the cast members. Finally, some of the singers, whether chorus or main cast, had difficulty enunciating the words at an operatic pace.

Nevertheless, with “The Bohemian Girl,” VLOC brought to life a piece that is rarely seen today, and that alone is a theatrical treat.