Theatre Review: ‘The Curious Incident of the Dog in the Night-Time’ at the Kennedy Center 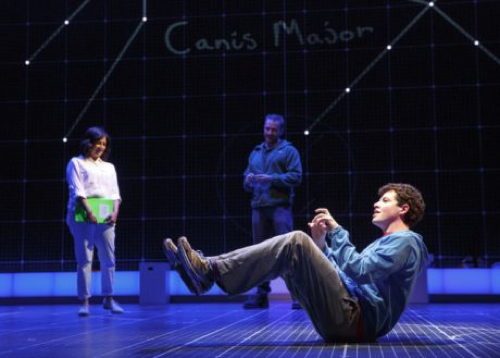 A young man fighting to find answers about who killed his neighbor’s dog ends up on an unexpected journey to realizing the truth of his family. “The Curious Incident of the Dog in the Night-Time,” based on the novel by Mark Haddon, tells the story of Christopher, a 15-year-old with an autism spectrum disorder. The story is told from Christopher’s eyes so the audience is given the unique opportunity to get a glimpse of how he, and others like him, experience the world. This technical masterpiece and compelling story lead us into a world that many have trouble understanding.

The show has been widely received in London and here in the US. In 2013, the original production won seven Olivier Awards and came to Broadway the next year. The US production won five Tony Awards in addition to several Drama Desk, Outer Critic Circle, and Drama League Awards. The Broadway production closed just last month.

This technical masterpiece and compelling story lead us into a world that many have trouble understanding.

Adam Langdon leads the cast as Christopher. The role is physically and emotionally demanding and Langdon maneuvers the various quirks quite well. His energy started a bit low but within the first couple scenes his performance grew very strong and remained intense for the remainder of the show. This young actor proves to have a promising career.

Another key character is Siobhan, a teacher at Christopher’s school who helps him with coping skills. He thinks of her often when he is having trouble. Maria Elena Ramirez plays the role with maternal strength and depth. Her character understands Christopher better than anyone else and Ramirez shows us the love of a teacher. She truly cares f0r him and works with him so that he can be the best. She is the one who consistently reassures him that he can do everything. He is brave.

The technical elements are truly overwhelming and it is easy for the senses to feel overwhelmed. The set, designed by Olivier and Tony award-winner Bunny Christie, is a gigantic LED grid. The use of squares and bright lights give the show a very mathematic feel, which reinforces the way that Christopher sees the world. The walls have secret drawers and cabinets. The blocks are moved around the stage to be luggage, ovens, seats, and any other items they might need. The majority of props are set around the edges of the stage and the ensemble is visible for a lot of the show.

The lighting was incredibly complex and beautiful. This element assists greatly in the storytelling. Lighting designer, Paule Constable, used a variety of lights and colors to change location, theme, mood, anything. The extreme brightness of the lights was nearly blinding at times, but in a lot of ways, that is how Christopher would see them.

The original music, by Adrian Sutton, was electronic and technical sounding. The sudden starts and volume changes were jarring at times. Ian Dickinson is the sound designer and the various contrasts in sound and volume were dramatic and added greatly to the storytelling.

It is exciting and refreshing to see the design as a storytelling element and not just there to make the actors look pretty while they do the work. Theatrical designers are storytellers too and it is high time the community treated them as such.

The play is a fascinating view of what life is like for a person with autism spectrum disorder and their parents. It also is a great reminder that anyone can do anything regardless of their circumstances.

Running Time: Approximately 2 hours and 30 minutes, with one 15-minute intermission.

“The Curious Incident of the Dog in the Night-Time” is running at the Kennedy Center through October 23, 2016. For more information and tickets click here.