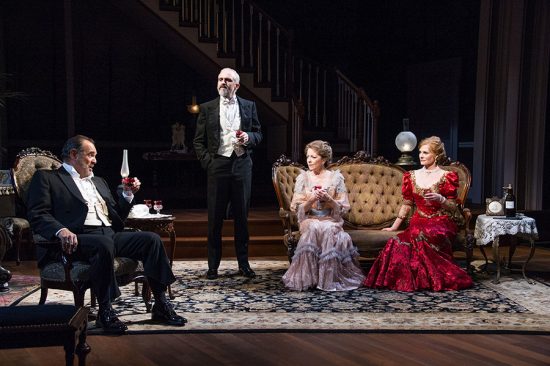 “God forgives those who invent what they need,” quips Ben Hubbard (Edward Gero) with a perspective on honesty Donald Trump would envy. Ben reflects on the impact of some rhetorical flourishes he and his brother Oscar Hubbard (Gregory Linington) have just deployed to present Chicago investor William Marshall (James Whalen) with a commercial plan for the family’s cotton holdings.

The company delivers performances that reflect its collective wealth of experience.

The Hubbard brothers are business partners and they’ve made a good amount of money, but they want more. Ben takes pains to point out key social distinctions, like the fact that among the family only Oscar’s wife Birdie (Isabel Keating) descends from true Southern aristocracy. The play’s plot revolves around attempts – which start straightforwardly and devolve from there – by Ben, Oscar and their sister Regina Hubbard (Marg Helgenberger of ‘CSI: Crime Scene Investigation’) to convince her husband Horace Giddens (Jack Willis) to provide the last of the investment financing they need to put their deal with Mr. Marshall in motion.

Profit is the main goal, but there are secondary ones: in Ben’s case, besting rivals (his siblings), in Oscar’s case, keeping your head above water as a familial second-fiddle. The younger generation has a keen eye for the dynamics at play, but different responses to them. Oscar and Birdie’s son Leo Hubbard (Stanton Nash) seeks with his mother’s nervous intensity to emulate them; Regina and Horace’s daughter Alexandra (Megan Graves) spends the play building up her rejection of them and insists on treating her family members as people, not pawns to be manipulated. Meanwhile, the Hubbard family’s African-American servants, Addie (Kim James Bey) and Cal (David Emerson Toney), see all but say little.

Hellman takes her timeless title from the Bible’s Song of Solomon (“Take us the foxes, the little foxes, that spoil the vines, for our vines have tender grapes”). Her play premiered the same year as “Gone with the Wind” when the post-Civil War South was a popular subject. James Goldman later took the theme of a backbiting elite family to 12th century England in “The Lion in Winter” (1968). Today’s audience may see the family dynamics on stage and think “Game of Thrones.” Hellman’s themes, while set firmly within her chosen time period, are timeless.

Director Kyle Donnelly, a long-term Arena veteran, uses both the depth and height of the Kreeger’s stage space to great effect, presenting the sense of an entire home while establishing private spaces on stage. Occasionally, however, her willingness to put a character’s back to the audience for extended beats locks us out of their world (this was particularly notable in the play’s crucial final scene).

Set Designer Mikiko Suzuki MacAdams creates the Hubbard’s richly-appointed circa-1900 home, but adds a desolate landscape on the back wall, suggesting that the Hubbard’s splendor sits in a wilderness (or do they live in a glass house?) The home’s central staircase – specified by Hellman and central to the plot – makes characters traveling to the home’s second floor literally disappear into the heavens. Conversely, when Helgenberger’s Regina descends from them in a halo of stage light and clad in one of Costume Director Jess Goldstein’s striking looks, the visual is perversely powerful. Ryan Rumery’s sound design is clean throughout, subtly underscoring rising tension in the scenes. But it begs the question: can the actors not be trusted with Hellman’s words to achieve that on their own?

The company delivers performances that reflect its collective wealth of experience. Gero and Linington are area regulars who were seen most recently in The Shakespeare Theatre Company’s Free-for-All revival of “The Tempest” last month. Stanton Nash and Megan Graves deserve special credit for crafting rich characters in comparatively less stage time. As Hellman’s vessels for asking whether the rising generation will be business-as-usual or stand for change, Nash and Graves’ roles are crucial. They are stage veterans in their own right, and it shows.

As dying patriarch Horace Giddens, Jack Willis is relentlessly compelling. Willis starred as LBJ in Donnelly’s production of “All the Way” at Arena last year, a role he originated at the Oregon Shakespeare Festival. It is no surprise, then, that he embodies power on stage. In this case, Willis captures Horace’s pain – emotional and physical – in assessing the personal costs of his lifetime of financial achievements. Willis is the broken, beating heart of the play, and he is mesmerizing. As Regina, Marg Helgenberger embodies a regal Southern Belle. She establishes her characters’ allure and dangerous potential. But as the plot darkens, the audience seems to be left waiting for a turn to Regina’s sinister side that never fully arrives.

Hellman is one of the great 20th Century American playwrights, and Arena Artistic Director Molly Smith is placing special focus on her work this season (next up is “Watch on the Rhine,” starting February 3). Her dialogue addresses themes – racism and income inequality chief among them – that are painfully relevant in this election season. “There were people who ate the earth and other people who stood around and watched them do it,” Alexandra repeats at the play’s end. She resolves not to just stand around and watch. It is a call to action from Hellman, then as now.