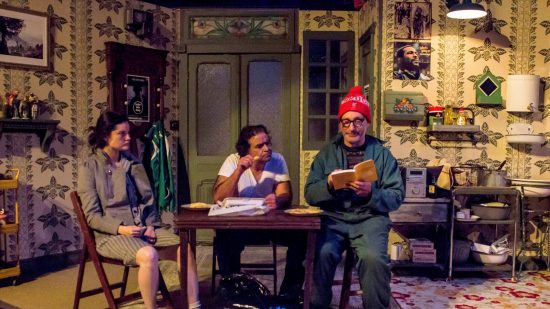 Chelsea Mayo as Aimee, Matthew Vaky as Tommy, and David Dubov as Doc in The Night Alive. Photo by St. Johnn Blondell.

Like a gentle sledgehammer, Conor McPherson’s “The Night Alive” is a masterwork of daily life juxtaposed with transcendent issues deep in our soul. McPherson has a singular gift for making the ordinary glow with an extra dimension, like nurturing a cocoon to full bloom as a butterfly. Playing at Quotidian Theatre at the Writer’s Center, it is a fine example of theatre raising one’s consciousness.

Irish Playwright Conor McPherson has become a leading voice in international drama circles, and quite the hot item for groups looking for recent works from leading artists. This is the show’s second area showing after its debut in London in 2013.

…a sublime surprise, a bump in the night just around Halloween.

And Quotidian has a long history with McPherson and takes pride in doing him well. Quotidian, long a wellspring for McPherson’s productions, recently put on the U.S. premiere of The Veil. Their realistic portrayal of classic dramas makes this story of damaged people right up their alley, and aside from sketchy Irish dialects at times, serve him well.

What we initially see onstage, courtesy of jack of all trades director and set designer Jack Sbarbori, is the messy squalor of a Dublin flat, a hardscrabble life of people just scraping by.

Our main tenant, Tommy (Matthew Vaky), is an unkempt soul of minimalist tastes who must quickly clean up after he brings home a young woman he has just met on the street, the object of a tussle, and covered in blood. Aimee, a part-time street person plying tricks, is the strikingly statuesque Chelsea Mayo. Even lower on the scale of fumbling people we meet, she stays with Tommy and acts as a catalyst for their moribund activities.

Add in Joe Palka, as the irascible Morris. Tommy’s uncle and landlord, he is a person set in life yet tormented by it—looking for any chance to put down Tommy, living in the past and unable to change his present.

Then there is Doc, a slow moving, but deep thinking friend of  Tommy’s, who helps in his catch and catch can career of cleaning up and hauling with his van. Played in an achingly sad turn by David Dubov, he drops in for a quick meal, a place to stay, or just to connect in a family of sorts. Adding a languid speech sequence, it gives a fine counterpoint that Dubov—thru McPherson use well. As Tommy says Doc is on disability, “because he will always, always, be five to 10 minutes behind everybody else.” He invokes memories of Jackie Gleason’s Poor Soul character, the talking version.

All of them have simply made messes of their lives. In McPherson’s world, does misery simply love company, or can it gain from it?

Great physical humor is exhibited here, intertwined by the biting wit. Tommy is energy everywhere, trying to make things well with the others, screaming at his wife over a headphone, adding to the manic episodes. Doc, a philosopher of all things, shows how he once was kicked out of yoga class for meditating. Mayos’s Aimee is ethereal, floating through all of their lives, touching them and moving on. This is the source of the play’s boisterous comedy as well as its aching poignancy.

The arrival of Kenneth (Grant Cloyd) as Aimee’s nefarious boyfriend and pimp gives a touch of what McPherson is known  for. With haunting dialogue reminiscent of Javier Bardham in “No Country for Old Men” his sadistic treatment of Doc is a squeamish delight.

Alas, to be human is to be messed up, in McPherson’s view. That’s what separates people into isolated zones of nuttiness and also what makes them reach out for one another.

But we all need redemption of some sort. What do you think it’s like at the end of life, Tommy? When you die, do you just go to another moment in time? Doc asks Tommy.

Where do they wind up? It’s a sublime surprise, a bump in the night just around Halloween.

Running Time: 1 hour and 40 minutes without an intermission.