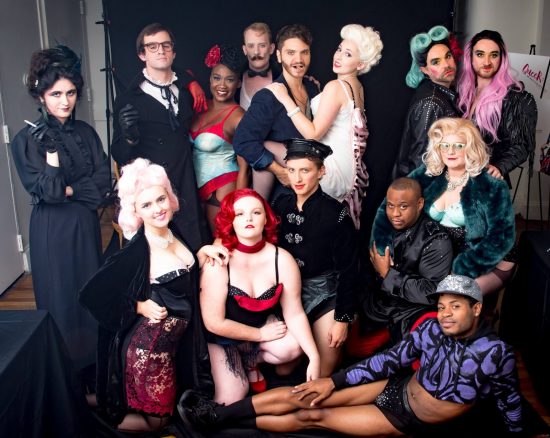 The cast of Iron Crow Theatre’s ‘The Wild Party!’ Photography by Rob Clatterbuck.

Iron Crow Theatre prides itself on being not just on the cutting edge, but being the cutting edge when it comes to representing the Queer Perspective (yes, I put it in caps ‘cause it needs to be heard.) The production of “The Wild Party” by Andrew Lippa, based on the 1928 narrative poem by Joseph Moncure March, is a perfect vehicle for the company, shining a light on the inelegant underbelly of life in the fast lane during the Roaring ‘20s.

Ok, quick, thumbnail plot sketch:  Queenie is the fast-living vaudeville showgirl who takes up with a good-looking, slick-talking, physically abusive, fellow vaudevillian, Burrs.  When Queenie gets restless, kinda wanting something but not knowing what, she decides to throw a big party and invite her and Burrs’ best friends.  During the party, relationships get strained, secrets come out, boundaries are tested and all the guests get drunk on liquor, illegal stimulants and their rampant libidos.  For one of the main characters, it really doesn’t end well.  There now.

Elias has orchestrated a larger than life production, bursting at the seams with inventive touches, great pacing, and a sharp eye for details.

Iron Crow Artistic Director Sean Elias directs.  He’s spun a web of debauchery that is fantastically entertaining and totally fascinating. Elias has orchestrated a larger than life production, bursting at the seams with inventive touches, great pacing, and a sharp eye for details.  He’s assembled a team as skillful as his vision.

The evening begins with the actors milling around on the outstanding set designed by Ryan Haas.  From the center stage staircase to the funny little calliope-like instrument stage right, the fainting couches and beds, the entire stage is covered in delightfully decadent touches – my favorite, oddly enough, was the toilet that moved about as needed by the action.  Wonderful.  The slightly jarring tones of purple and green are well served by Janine Vreatt’s inspired lighting design.

Music Director Ben Shaver has assembled a pit jazz band that rocks.  He and his talented band of players tackle an exceptionally difficult score with true musician’s chops.  Shaver does double duty by playing piano and conducting.  With Stacey Antoine on reeds, Brian Sanders on trumpet, Tanner Selby on guitar and Billy Georg on drums.  I don’t usually mention the band member names, but each one of these guys deserves a spotlight of their own.

Betty O’Hellno (doncha’ just love that name?) has dressed this cast beautifully. Knockout gowns on Queenie, Steampunk Tranny outfits on the two brothers who might be a bit too fond of each other, bustiers on the men, skimpy lingerie on the women, her gender\schmender approach is an artistically true display of the core mission of the Iron Crow.

The entire cast brings their A+ game to this one. In the group numbers like “Queenie Was A Blond” and “What A Party,” they all shine.  Among the supporting players are some true standouts.  Kathryne Daniels and Jesse Marciniak are nicely paired for their number, “Two of a Kind.”  And Valerie Holt nails a dead-panned lesbian named Madelaine True when she sings “An Old Fashioned Love Story.”

Sylvern Groomes, Jr. is firm in his resolve as Black.  With a total focus on the character, he is an excellent spot of calm in the swirling storm at the party.  He’s believable and attention-holding.  And has a voice that is as smooth as velvet.  He looks tough and talks soft and is always in control of his character.

Jessica Bennet is totally hot as Kate.  She shimmies and shakes her way around like she was born to it.  With a husky voice and barely controlled boil to her acting, she’s funny and touching in her pot-stirring meddling in Queenie’s and Burrs’ relationship.  Great pipes and legs that go on for two or three days, she delivers a stellar performance, especially in her rendition of “Look At Me Now.”

Justin Mazzela is a spot-on Burrs.  This guy knows how to work a stage and an emotion like a pro.  Baltimore has no lack of talented singers or actors, but Mazzela is one of the best at both.  It’s difficult to play a character that everyone wants to hate and yet make the audience feel a degree of empathy for him. He’s snarky and sexy and nails his character in every scene.  His voice is comparable to some of the best I’ve heard on Broadway.  I don’t know why I haven’t seen him before, but you can bet I’ll keep an eye for him in future productions.

And as for Ms. Allison Bradbury as Queenie, I’m going to have to control my enthusiasm.  She is fearless, vulnerable, tough-as-nails, smooth as silk, a shimmering, dazzling, hot damn star! This girl sings as good as she looks and that’s saying a lot.  She’s no whimpering ingénue, nor an in-your-face dame, but she can hook you with a look, a toss of the impossibly blond hair, a catch in her throat that turns into a pitch-perfect vocal tour-de-force. When she sings “Maybe I Like it This Way” I could barely sit still.  Well, so much for my control.  This girl’s going places.  I can’t wait to see where next.

Iron Crow is such an important part of the Baltimore Theatre scene.  Sean Elias’ vision for this production of ‘The Wild Party’ makes it crystal clear why we need him, and Iron Crow, around for a long, long, long time.

Advisory: “The Wild Party” explores mature themes, contains adult language, sexual content and violence. The Wild Party may not be suitable for patrons under the age of 18.