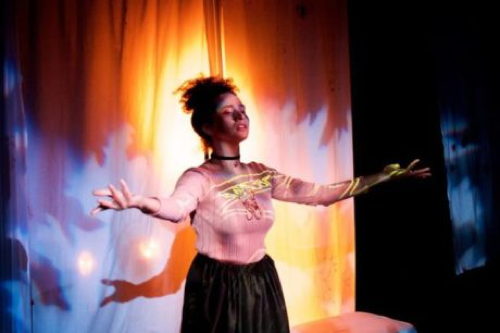 There are few mythical creatures in our culture as pervasive as the witch. Especially around this time of year, it’s hard to go anywhere without seeing them leering at you from advertisements and holiday cards. From Monty Python to last year’s award-winning and terrifying film “The Witch,” there is something about this idea of a human-like creature that can manipulate the natural world that captures our imagination.

Convergence Theatre’s “Witch” explores the term as it applies to gender. Elena Velasco returns to Convergence to direct this engaging play. At its core, “Witch” is about three women who experience violence at the hands of the men in their lives. Mother Sawyer, an old woman dubbed a witch by her community, Winifred, the first wife of Frank, whom he marries in secret, and Susan, his second wife.

Elena Velasco…returns to Convergence to direct this engaging play.

The production connects victims of gendered violence across centuries: the burning of witches in Jacobean England and the very real modern-day threat of sexual and domestic violence. Based on the Jacobean play “The Witch of Edmonton” written by William Rowley, John Ford, and Thomas Dekker, the play combines the heightened language with fluid dances, and projections to create a performance that is spiritual and all-encompassing.

Instead of a decaying crone, Sharalys Silva brings a youthful vitality to the character of Mother Sawyer. She commands the stage as she laments “Why does the envious world throw its malice on me?” One can’t help but be reminded of Shylock’s Hath Not a Jew Eyes speech. Janani Ramachandran plays the gentle Winifred, and excels in her character’s struggle to portray a boy.  Stephanie Tomiko plays the innocent Susan, the picture of pristine femininity. Each woman has her moment to shine, but it is the synchronized movement pieces that tie these women together so fluidly.

“Patriarchy is not only a women’s problem and men alone do not perpetuate it.” Says Olivia Haller in her dramaturg’s note. The character of Susan’s father Carter becomes her mother Lady Carter in this production played by Annette Mooney Wasno.  Chris Daileader plays Frank, husband to both Winifred and Susan. As Frank, Daileader is the quintessential “nice guy.” Daileader and Wasno’s joint portrayal of Tom the dog with Daileader is terrifying. Darren Marquandt plays Thorney, Frank’s father and the primary antagonist of the play. Marquandt is an ominous presence on the stage, representing patriarchy at its most oppressive.

The costumes designed by Kateri Kuhn and Allie Rocha coincided with the theme of a marriage of two connected time periods by using modern-day articles to imply Jacobean fashion. Likewise, Phillip Da Costa’s design uses Lights and Projections to connect the two eras. If the costume and the lighting design are the anchors, Joshua Rosenblum’s set design is the sail that ferries you between the worlds of then and now.  Also worthy of note is Rosenblum’s design of the devil dog Tom.

Nowadays, witch-hunts are pushed to the farthest edges of civilization, usually in isolated communities, but you do not have to go far to find gender-based violence. These crimes still pervade our culture like the symbol of the witch, and attitudes towards the crimes are still stuck in the days of Dekker, Ford, and Rowley. Lady Carter’s “Let’s have some mild questions – have you mild answers?” plants the seed for comments like Brock Turner’s “15 minutes of action.”

As Haller points out in her dramaturg note, “When women are seen as less than human, society as a whole suffers.”

“Witch” runs from October 14th to October 30th, Thursdays, Fridays and Saturdays at 8pm and Sunday at 2pm.  For more information or to purchase tickets click here.