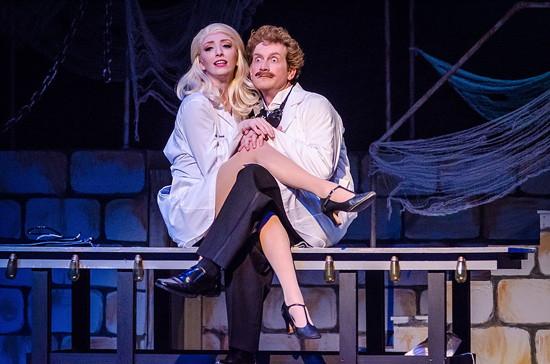 What happens when the grandson of Victor Von Frankenstein shows up in Transylvania? In “Young Frankenstein,” currently presented by Silhouette Stages, we discover whether the legacy of Frankenstein holds true. The Mel Brooks musical is laugh out loud funny with crazy characters that will keep you entertained.

Frederick Frankenstein (Jeremy Goldman) is a New York doctor who focuses on the workings of the brain. When he hears his grandfather has died, he boards a ship to Transylvania, leaving his fiancée, Elizabeth (Ashley Gerhardt), behind. Arriving in Transylvania, he’s met by Igor (Matt Wetzel), a humpback who says all he wants is to work with Frederick and be his faithful servant. Igor has hired the beautiful blonde Inga (Lindsey Landry) to work as Frederick’s laboratory assistant.

As one of the most entertaining productions I’ve seen, I strongly recommend that you go to this madcap musical…

At the castle, they meet Frau Blucher (Jean Berard), the housekeeper who claims she was Victor’s girlfriend. When Inga and Frederick discover a secret bookcase, they are led to Victor’s laboratory. Frederick dreams that he must inherit the ‘family business’ and finds a book Victor has written on bringing people back to life.  With his medical mind working overtime, Frederick decides that contrary to his first instincts, he needs to bring someone back to life. Igor obliges by finding the corpse and the brain, but the subject is a monster (Christopher Kabara); he can walk and talk, but the villagers are worried about having him on the loose. There can’t be a crazy monster pillaging Transylvania so Frederick decides to give the creature some of his brain power. And lo and behold, he’s created a new human life.

As a Mel Brooks musical, “Young Frankenstein” is all about the humor, and this show is the funniest I’ve ever seen. The show starts out with Transylvania’s Inspector (Michael M. Crook), who’s missing an arm and a leg, telling the villagers about Victor’s death. He also tells them about his surgery – which cost him ‘an arm and a leg.’ Then there’s Elizabeth (Gerhardt), the self-proclaimed madcap fiancée, who sees Frederick off at the ship by saying how much she loves him, but then singing “Please, Don’t Touch Me.” Since she’s such a pretentious diva, Frederick can’t touch her hair, her nails, or her lips; they can’t even touch when they dance. Igor (Wetzel) is hysterical, with his hump which keeps changing sides and limping walk. At one point, Frederick says he can possibly correct the hump, to which Igor replies “what hump?” And when Frederick meets sexy Inga, they sing “Roll in the Hay” while sitting in their hay-filled cart pulled by horses. The show has plenty of sexual innuendos (such as the streets of Transylvania, which go up and down), and you can’t help but laugh. The actors have amazing comedic timing; many scenes depended on pauses to get laughs, and the actors brought ‘the funny’ out of these long pauses.

The singing is just as good as the humor. Elizabeth (Gerhardt) is a standout with her over-the-top personality and big voice – whether singing “Surprise” when she shows up unexpectedly in Transylvania (as she says, it’s all about “me, me, me, me”) or “Deep Love” after meeting Frederick’s creation. Inga (Landry) holds her own, particularly when she yodels to great applause in “Roll in the Hay.” And Frederick shows he can sing and dance – as well as create new life – in “Puttin’ on the Ritz” and “Man About Town.”

Although Act II seemed to lag after a thrilling Act I, there are still some memorable moments. Watching Frederick’s creature in a tux dancing and singing to “Puttin’ on the Ritz” garnered big laughs from the audience. And seeing Elizabeth, who formerly sang “Please, Don’t Touch Me” fall for the creature (complete with her crazy hair so different than the usual perfect coif), was well, quite something. Fortunately, the Monster returns this “Deep Love” for Elizabeth.

The set (Alex Porter) is pure Transylvania with an awesome secret bookcase that rotates 360 degrees when a candle on the side is lifted (of course, this led to all kinds of crazy situations with Inga and Frederick constantly rotating with the bookcase). There is also the creepy laboratory, complete with a surgical table which completely lights up when Igor hits the switch to bring the monster to life.   The sounds and sights of Frederick’s creation being brought to life are truly amazing; the lights flicker, the set lights up, and there is the crazy sound of electricity.

Caroline Jurney’s colorful costume choices are just right, and Director and Choreographer Tommy Malek makes the most of each song and dance number. There is also great attention to detail and setting the mood for the production. Before the show starts, old black-and-white movies flicker on the stage. And since “Young Frankenstein” is a brilliant spoof on the 1930s movies “Frankenstein” and “Son of Frankenstein,” the opening credits are shown as a black-and-white film, complete with the names of the actors and production staff.

“Young Frankenstein” transports us into the creepy world of Transylvania and shows us what can happen when you have a legacy of creating monsters and a medical mind. As one of the most entertaining productions I’ve seen, I strongly recommend that you go to this madcap musical – perfect for an early Halloween and better than any candy.

“Young Frankenstein” is playing through October 30, 2106 at Slayton House in Columbia, MD . Click here for tickets.