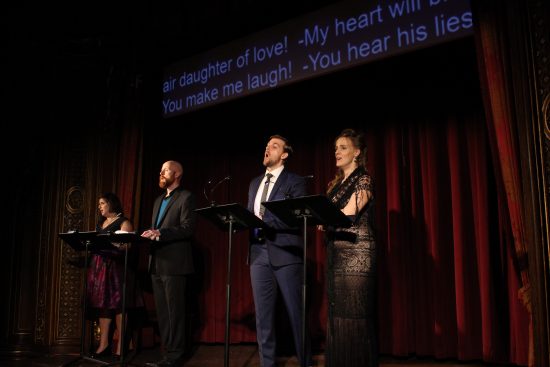 Nobody wrote tragic operas like the grand maestro himself, Giuseppe Verdi. With a portfolio that includes such greats as “Aida” and “Il Trovatore,” “Rigoletto” is one of the finest.  The Baltimore Concert Opera does a wonderful job presenting this venerable work.

The stately Engineers Club in Baltimore’s Mt. Vernon neighborhood, in the shadow of the Washington Monument, is a suitable setting.  With red damask walls and soaring ceilings covered in gilded framed frescoes, it provided a lovely background.  The well-heeled, sold-out crowd was in for an auditory feast because this production was everything one would wish for in a concert presentation.

There was absolutely no doubt that everyone performing, from the chorus to the leading characters, possessed some of the finest voices to be heard in this or any other area.

“Rigoletto” tells the tale of a court jester of the same name, who serves a vain and misogynistic playboy Duke of Mantua.  The jester enjoys making fun of the other noblemen and courtiers, who plot to kidnap the lovely young woman they think is his lover, who in reality is his daughter, Gilda.  Unbeknown to any of them, the Duke has also taken a liking to the lady.  When Rigoletto discovers they have hidden her in the Duke’s palace and the Duke himself has seduced her and ruined her maidenhood (don’t you love quaint descriptions like ‘maidenhood’?), he vows revenge.  He arranges to have the Duke murdered by Sparafucile, a criminal, who enlists his sister Madalena in the plot.  How the arrangement goes horribly astray is the tragedy at the climax of the story.

There was absolutely no doubt that everyone performing, from the chorus to the leading characters, possessed some of the finest voices to be heard in this or any other area.  My one concern is that, in a concert setting of such a moving and dramatic story, they must remember to act as much as they sing.  Simply presenting the music can never be as effective without sufficient and consistent attention to telling the story.  That being said, they all did a magnificent job most of the time, and more than enough to offset any lapses in acting.

Heather Knieotek DeSimone was sturdy and stalwart as Giovanna, nurse to Gilda.  Her lovely mezzo-soprano served her character and the score well.

Peter Tomaszewski was appropriately smarmy as Marullo, and his strong baritone was always on point and nicely presented.

Rebecca Ringle Kamarei as Maddalena has a voice as luscious as a vocal mink stole and is every bit as elegant.  A perfect contralto, she is sultry and seductive and had by far the best acting chops on stage.

Justin Hopkins in the dual roles as Sparafucile and Count Monterone has a voice as deep as the ocean and full of passion.  I don’t know why the audience is always amused when either of his characters hits an impossibly low note, but we are.  Also a fine actor, he makes the most of both characters and is a welcomed addition to every scene he’s in.

Josha Kohl’s tenor voice is spot-on as the licentious Duke of Mantua.  His command of the character is evident in every note.  Fearlessly tackling notes that would give a lesser vocalist the shivering fits, he’s skillful and accomplished. The best-known piece of music from the production is undoubtedly “Il donna mobile.”  Kohl does a fine job with it, even though I was holding my breath to see if he would hit that infamous high note that comes just before the end of the piece.  He not only hit it, he nailed it to the gilded ceiling.  The audience cheered for that, and he deserved every kudo.

Timothy Mix as Rigoletto was in fine form and his baritone voice sat nicely with the melodies supplied by Verdi.  Tall and stately, his bearing belied the description of the hunchbacked Rigoletto but it in no way detracted from his presentation.  When he learns of his daughter’s abduction, his distress was palpable.  For most of the performance, he imbued each of his songs with emotion and vocal prowess.  During the rare times when his acting took a back seat, his ability to maintain the audience’s attention was due to the sheer power of his voice.

Sarah Asmar performed the role of Gilda with a vocal focus that was lovely.  Her shimmering soprano was able to go from a heart-wrenching whisper to a full-on assault with equal skill.  In her first act rendition of “Caro Nom” she allowed her formidable abilities to shine as bright as the noon-day sun.  Ms. Asmar brought a delightfully down-to-earth take on the character, as opposed to the divaesque presentations so often allowed to overshadow the delicate character of Gilda.  Brava to the lady of the evening.

Baltimore Concert Opera is a lovely part of the tapestry that comprises the fine culture and arts that Baltimore is too little known for.  Here’s hoping that they continue the tradition started some 30 years ago for the foreseeable future.