Theatre News: Standing Up for Performing Arts Education and Careers 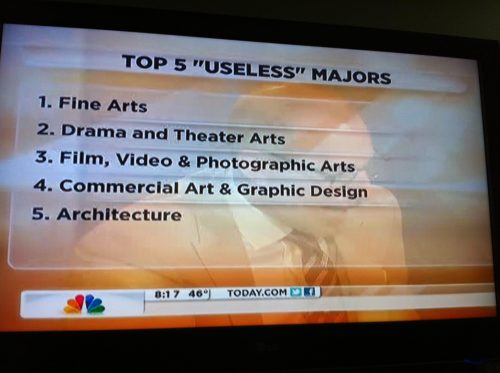 A few years back on April 24, 2012, NBC’s Today Show, who has produced shows such as “The Sound of Music LIVE,” “The Wiz LIVE,” and coming this December “Hairspray LIVE,” defined a degree in Drama and Theater Arts as one of the “Top 5 ‘Useless’ Majors.”  In another bit of irony, they also listed a career in Film, Video and Photographic Arts as “useless.”

Carnegie Mellon University (the 2015 PA Theatre Guide Readers’ Choice Award for ‘Best College Theatre Program’) doesn’t think of a Theatre major as “useless.”  The head of the School of Drama, Peter Cooke, OAM Ph.D. says, “Of course we feel that studying the arts is of great value to our society and culture, otherwise what would we be doing here? The work ethic drama students cultivate is second to none and while most of our students go on to have fulfilling careers as artists, others take skills they’ve gained such as collaboration, organization and creative problem solving and apply them to successful careers in other industries such as business and medicine. There’s so much to be gained from the study of drama.” 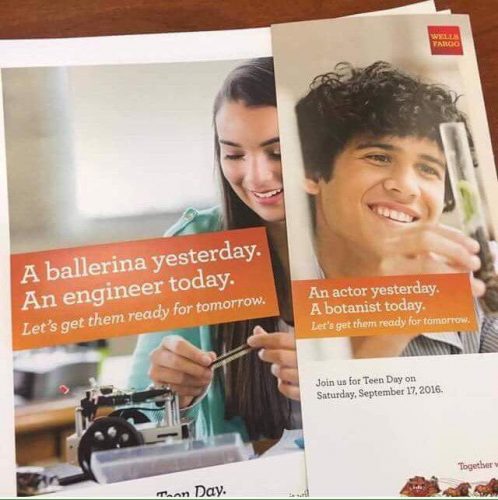 What exactly is Wells Fargo trying to imply?  It comes across as though being a ballerina or actor is what you do when you are a teen, but when you grow up you get a real, money making job such as being an engineer or botanist.  And why does the brochure feature both a ballerina and actor as the before financial success story? Who designed this brochure?  I don’t know but NBC’s Today Show says that Graphic Design is a “useless” major anyway. 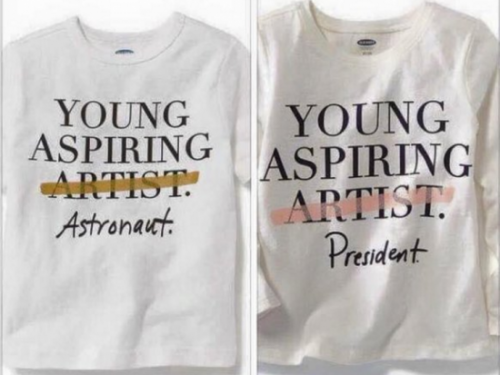 Do you remember in December of 2015 when clothing chain Old Navy  created quite the controversy with their T-shirt design for children that reads “young aspiring artist” with the word “artist” crossed out and replaced with the word “astronaut” or “president.”

You would think that the distasteful shirt design is just an internet hoax, but Old Navy has confirmed that the shirts are real.  The “young aspiring artist” shirt, in fact, was for sale for $9.94 in their “Funny Baby T Shirts” section.

At least Old Navy did try to make amends.

“At Old Navy we take our responsibility to our customers seriously. We would never intentionally offend anyone, and we are sorry if that has been the case. Our toddler tees come in a variety of designs including tees that feature ballerinas, unicorns, trucks and dinosaurs and include phrases like, ‘Free Spirit.’ They are meant to appeal to a wide range of aspirations. With this particular tee, as a result of customer feedback, we have decided to discontinue the design and will work to remove the item from our stores.”