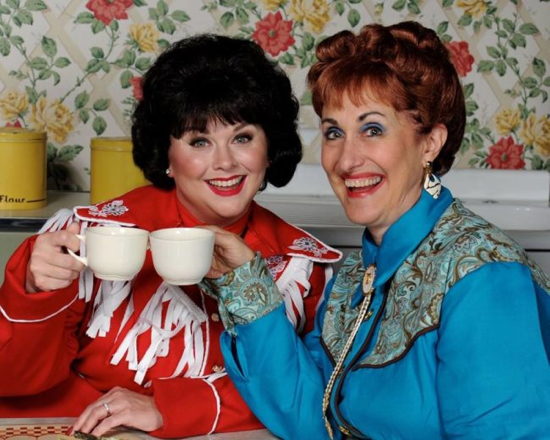 Patsy Cline had a brief but stellar career that only spanned from 1957 until 1963, but oh what a legacy she left!  In Dundalk Community Theatre’s production of “Always…Patsy Cline” that legacy is on display in fine fettle.  This imminently hummable tune fest, originally created and directed by Ted Swindley, shines a white-hot spotlight on Ms. Cline’s incredible catalogue of songs that helped define an era.

“Always…Patsy Cline” is a typical ‘juke-box’ musical. That’s a musical that highlights the work of a particular artist, with a thin narrative moving the action along from one song to the next.  Recent examples would be “Jersey Boys,” “Million Dollar Quartet,” “Beautiful” and the like.  “Always…Patsy Cline” is saved from being merely a concert of her hits by relating how one of Patsy’s biggest fans became one of her best friends early on in her rise to fame. Louise Seeger is the narrator, head cheerleader, ringmaster and confidant to the star. Together, these two women pack a musical punch that tells Patsy’s story in song and Louise’s through delightful monologues that move the action along in a linear fashion to great appeal.

There’s a lot to be said for juke box musicals.  And Dundalk Community Theatre is saying all of it with this production of ‘Always… Patsy Cline’.

Director Eric J. Potter has constructed a well-paced show that only droops a little in a couple of spots in Act 2. With only the two characters and a live honky-tonk band center stage, Potter skillfully guides the production team and cast along the musical trajectory that formed Cline’s career, and her relationship with the real-life Louise Seeger.

Charlotte Evans does a grand job as Musical Director.  While playing a mean honky-tonk piano as part of the band, she conducts the music and keeps the pace through ballads and uptempos with equal aplomb.  The band follows the flow with expertise, though it bears mentioning that one of the members singing backup was woefully out of tune too frequently to ignore.  With a little more practice, I am sure that will be corrected.

Marc W. Smith has once again designed and lit a set that serves with perfection.  A splendidly retro ‘50s era kitchen sits stage right, stage left is occupied by a vintage juke box, and the rest of the stage is given over to a bandstand that provides a fitting backdrop for the rest of the action and where the outstanding, five-piece band makes their home.  The whole set is watched over by an authentic looking ‘Grand Ole Opry’ sign. Larry Munsey brings considerable expertise to the costumes, with Ms. Cline looking sumptuous in her gowns and homey as a porch swing in her less fashionable moments.

Anyone who assumes that Maribeth Vogel is merely a supporting character in this two-woman show is dead wrong.  She’s what keeps it from being a litany of Patsy Cline hits.  She’s a rollicking, rolling, riot as she struts her stuff all over the stage and into the audience numerous times to lead singalongs.  Telling Louise’s story, she is hilarious, keeping the story moving with breakneck speed here, a well-placed hip thrust there, all with a rubber face and a smile that lights up the room.

Tiffany Walker Porta Burrows needs all those names to hang on her outsized talent on.  Quite simply, she is Patsy Cline.  With little dialogue, her function is to put forth song after song from the Patsy Cline songbook and she does each one with sublime style and vocal power that can raise the hair on your arm one minute and the roof the next. All the hits are here, but my favorites would have to be ‘Walkin After Midnight,’ ‘Stupid Cupid,’  ‘Gotta Lotta Rhythm’ and especially ‘Shake Rattle and Roll.’ Burrows is the epitome of grace and stardom in her portrayal.

There’s a lot to be said for juke box musicals.  And Dundalk Community Theatre is saying all of it with this production of ‘Always… Patsy Cline’.