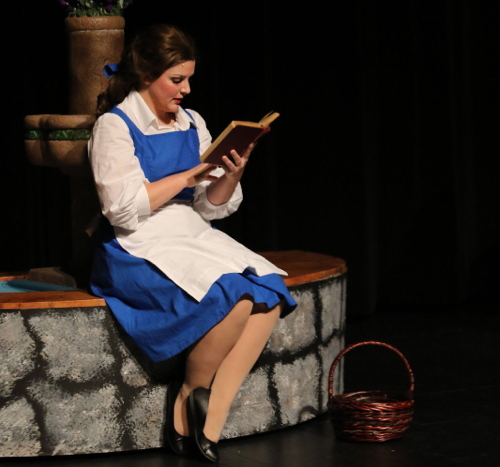 Be their guest! Disney’s “Beauty and the Beast,” presented by Charm City Players, is the enchanted tale of Belle and the Beast we all know and love. This production has beautiful costumes, all the wonderful songs, a fantastic castle, and amazing singers and actors.

We all know the story. Belle (Emily L. Taylor) doesn’t fit into her provincial town and knows there must be more out there. When her father (Dave Guy) gets lost in the forest and finds himself in an enchanted castle, Belle goes out to find him. Although the master of the castle is a terrifying Beast (E. Lee Nicol), Belle gives up her own freedom for that of her father’s. In time, with the help of the enchanted objects in the castle, she grows to become fond of the Beast. Could she be the one they’ve all been waiting for to break the witch’s spell?

Emily L. Taylor is delightful as Belle, with just the right mix of stubbornness and grace. Whether she’s refusing the Beast’s dinner invitation or Gaston’s advances, she does so in the polite, firm, confident way we would expect. As the Beast, E. Lee Nicol is completely terrifying. Thankfully, his bark is much worse than his bite. He does a great job transforming from a frightful Beast to a more ‘human’ character and nails his songs such as “If I Can’t Love Her.”

This production has beautiful costumes, all the wonderful songs, a fantastic castle, and amazing singers and actors.

In the musical, the castle servants are humans gradually turning into inanimate objects. Maggie Flanigan plays Mrs. Potts with just the right amount of motherly love.   Her voice is absolutely beautiful when she sings the title song. J Purnell Hargrove is a spunky and fabulous Lumiere. He has fantastic stage presence and delights us with his humor, dance moves, French accent, and insatiable love of women, including the ever-flirtatious and saucy Babette (Christina Nap). Cogsworth (Gregory Quinn) perfectly plays the serious counterpart to Lumiere’s sense of fun.

Props should be given to the scenic design and construction crew (Stephen Napp and Annmarie Pallanck) for recreating a beautiful castle. The multi-level set has faux marble steps, columns, an upstairs library, and even a roaring fire. Belle is able to read ‘King Arthur’ to the Beast upstairs or have dinner with him at a table set on the lower level. The crew has also recreated the fountain at the center of the French town and a charming thatched roof cottage where Belle lives with her father. Also worth mentioning are the special effects, which range from the Beast’s blinking mirror to Lumiere’s glowing candlesticks to smoke when the Beast turns back into the Prince.

It can’t be easy to create a cast of enchanted objects; costumers Sandy Boldman, Mary Gorman, Maggie Flanigan, Jenifer Grundy Hollet, and Pat Royal should be commended for bringing those objects to life. Lumiere has glowing candles for hands, and Cogsworth wears a full-length clock pendulum and turning mechanism on his back. Mrs. Potts holds one arm out and one curved to simulate her handle and spout while her dress curves to create a teapot shape. Her son, Chip (Logan T. Dubel), has perhaps the most creative costume as his head appears in the middle of a teacup with his body hiding under a box. Then there’s the myriad of other household objects who appear during the showstopper “Be Our Guest.” A full set of silverware sings and dances, most wearing sparkly vests and bowties.

Speaking of “Be Our Guest,” this is definitely the highlight of the show in terms of big musical numbers. Along with the silverware, there are gold napkins high-stepping. And there’s nothing like seeing a huge cast of enchanted objects forming a chorus line. This Disney favorite is a delight for the eyes and ears. Also impressive and unexpected is the modern dancing when the Beast fights against the wolves in the forest to save Belle. And in Gaston’s title song, the cast perfectly times their dancing with the clicking of beer steins. I also loved the more tender moments, such as the beloved Beauty and the Beast dance to the title song and Belle singing “Home” upon her arrival at the castle – although home should be where the heart is, her heart’s far, far away.

The entertainment isn’t contained to the actual show. Prior to the show, there’s face painting, raffles, and cardboard cutouts in the lobby. Many of the show’s young actors are involved, milling around with the audience in the lobby and selling everything from enchanted roses to concessions (make sure to bring cash!) There’s not a bad seat in the spacious 680-seat theatre; I ended up sitting at the top and still had a perfect view of all the action.

This musical has everything. An enchanted castle, a huge cast of entertaining inanimate objects, and an array of Disney songs we know and love. It may be a “tale as old as time,” but it still has mass appeal for kids and adults alike.

“Beauty and the Beast” runs through November 27, 2016, at Charm City Players. For tickets, click here.