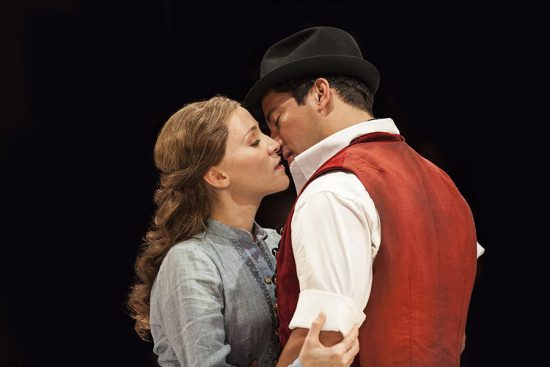 With appropriately flamboyant aplomb, the beloved, kinetic tale of a lowly carnival barker’s redemption that is Rodgers and Hammerstein’s “Carousel” makes it to Arena Stage’s Fichandler Stage by way of Artistic Director Molly Smith.  Arena regular and Helen Hayes winner Nicholas Rodriguez stars as Billy Bigelow, the bad boy barker at a carnival in 1873 Maine.  Billy’s life takes a turn when he decides to marry local millworker Julie Jordan (an equally charming yet less boisterous Betsy Morgan) on the spot.  Some time later, Billy finds himself at a standstill, longing for the past he left behind and fearing for the future he never prepared for.  The only hope comes in the form of a heist during a local clambake, but Billy must decide if he is willing to undertake this final gambit if it means risking his humanity, his love, and his life.

The driving force behind the plot is largely the conflicted relationship between the leads, with other characters feeling largely one-dimensional by comparison, including Julie’s best friend, Carrie Pipperidge (Kate Rockwell), who is more outgoing New England demeanor and trusting relationship with her love, Enoch (Kurt Boehm) serve as a foil to the former’s.  Every other character is a caricature in some form, from the jolly matriarch of the local spa Nettie (Ann Arvia), to shady, cynical Irish whaler Jigger (Kyle Schliefer).

…a phenomenal cast, a creative crew, and eternally catchy melodies.

Set designer Todd Rosenthal seems aware of the show’s attention being more around entertainment than character and has built it around style and motion.  Upon a white deck, the only objects used to manipulate the set design are, in fitting with the nautical Maine setting, a set of light white crates, while the orchestra plays on above in a large gazebo.

A lack of props allows for a great degree of playful pantomiming and the crates allow a variety of imaginative sequences and Parker Esse’s spirited choreography to unfold during the songs as characters jump, flip, and swing off the crates and each other from every angle (as in the big-band, toe-tapping ensemble “June is Busting Out All Over”).  The show greatly benefits from the freedom of Fichandler Stage’s theatre-in-the-round.  Even when Billy is pacing during the slower moments (Billy’s absolutely beautiful and reflective “Soliloquy,” a showcase of Rodriguez’s incredible charisma in this role), stellar direction by way of his shifting attention brings as much a degree of life and soul as every word the others project.

Complimenting this energy is the superb use of color in the show; the violet and scarlet lighting and costume design establish an otherworldly mood for both the carnival and for the outsider, Billy, whose vibrant red vest sets him apart from the muted blues and greens of the harbor folk and seems missed when it’s gone, like his life before.  “Carousel” forgoes subtlety and knowingly, exuberantly, and lovingly embraces camp.  And during its musical numbers, it certainly succeeds.

The dances and performances make this play incredibly entertaining, but the writing of more still, serious scenes about Billy and Julie’s relationship, dates the play.  The story is centered around Billy, and while Morgan brings Julie to life, we learn more about her from what others say, not so much from herself.  Things become uncomfortable when Julie mentions Billy has hit her, something that showcases creates an unfortunate problem in the play’s pacing.  As multiple songs often happen in the same scene, harsh turns like this are not given significant time to sink in, making them feel more like unpleasant occurrences rather than events which may produce a serious problem in Billy and Julie’s marriage.

The play seems all too eager to handwave abuse because of how much Billy loves Julie, and his actual coming to terms with this never reaches a true resolution.  A rather prolonged second act only emphasizes this problem further, as, a long but beautiful sequence (“Ballet”) and passive glances at Billy’s future provide little to believe in him experiencing any redemption beyond what he expressed when he realized he might be a father in Act 1’s “Soliloquy.”  The show excels in style, but when it dips too deep into substance, falters.

Carousel remains a classic American musical; entertaining and positively euphoric, thanks in no small part to a phenomenal cast, a creative crew, and eternally catchy melodies. But the shallow narrative and structural flaws stemming from its unusual pacing and shifted intent between acts are as much a consequence of the dated script as of the performance’s structure.  The play mostly works, yet also shows its age, creating a conflicting experience that undoubtedly resonates on every emotional level, but not in the way I feel the director intended.

Running Time: 2 and a half hours with an intermission.