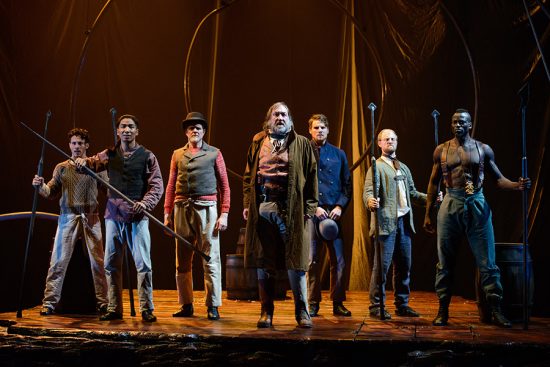 The cast of ‘Moby Dick’ Photo by Greg Mooney.

Face it, we’ve all survived a brutal presidential election season; it was especially brutal if you found yourself on the losing side.  You look around at your neighbors, wondering who voted for that guy, wondering whether you have anything in common with them at all.  At home the family’s Thanksgiving meal was tension-laden, with even the hint of politics leading to cutting asides and fury-laden walkouts.  Chances are you’re feeling like an outcast already.

So, call me Ismael.

Leave it to Herman Melville to anticipate the zeitgeist of late 2016, and the desperate urge many people now have to get away from it all.  Trouble is, as Melville would also tell you, the escape can be riskier than you could possibly imagine.

… a truly amazing voyage…A rich visual feast…this production has moments that will truly leave you breathless and in awe.

Chicago’s Lookingglass Theatre, famous for its creative adaptations of the classics, has come to town with a true marvel: David Catlin’s adaptation of Melville’s seafaring classic “Moby Dick.”  A rich visual feast, complete with intricately-staged acrobatics (courtesy of the Actors Gymnasium), this production has moments that will truly leave you breathless and in awe.

The ultimate seaman’s tale, the novel Moby Dick features an in-depth account of the business of whaling.  But it is remembered today for its glimpse into the heart of dark revenge; an entire whaling vessel is held hostage by a captain whose soul’s focus is the death of the whale who took his leg.  Especially if you’ve read “Moby Dick” from cover to cover as I have, it’s hard to imagine how any theatre can contain the multitudes of this tale—the sea, the sky, the port of Nantucket, the rigging, the whales.  It’s an impossible task to condense one of America’s great epics into a mere 2 hours, but Catlin has managed the feat with assurance and an almost unerring sensibility.  What few quibbles I have here should not deter any passionate theatre-goer from one of the D.C. theatre season’s great events.

The minute you enter the Kreeger, you know you’re in the belly of the beast; set designer Courtney O’Neill places you squarely in a whale whose ribcage expands almost into the house.  On either side, you see Isaac Schoepp’s rigging, the ropes of the ship—a reminder for history buffs that traditional theatres often employed sailors between voyages, to run the scenic flats backstage.  Starting from rough decking center-stage, the cast proceeds to clamber, hoist, dangle and dazzle under Sylvia Hernandez-Distasi’s choreography.  The movements here are intricate and often deeply moving; when a character falls overboard, the sensation of being underwater is palpable, and salvation from the deep exhilarating.

Jamie Abelson is a suitably quiet and steady presence as Ishmael, Melville’s pseudonymous hero whose restlessness and poverty drive him to a life at sea.  His stoicism is contrasted with the passion of his bunkmate, Queequeg, who is given vivid life here by Anthony Fleming III.  Fleming’s performance is unforgettable; he is every inch the Polynesian prince who, like Ishmael, is on a voyage of self-discovery, and who seeks out danger to prove his manhood.  Complementing this couple are Starbuck and Ahab, the whaling ship’s First Mate and Captain.  Walter Owen Briggs gives us a compelling Starbuck, the conscience of the good ship Pequod, and his moral dilemma is truly heart-wrenching as he copes with the Ahab’s madness and obsessions.  Christopher Donahue’s Ahab, like Fleming’s Queequeg, is nothing short of revelatory, and he holds the audience in his grip with the same mastery Ahab holds over his ship.

One of the many innovations here is Catlin’s use of the ancient Fates, in the form of three women—Kelley Abell, Cordelia Dewdney and Kasey Foster—to guide the story from its beginning on the Massachusetts docks to its dark conclusion at sea.  At times they come to us as hoop-skirted Nantucket ladies, at times shrouded widows; and with sound designer Rick Sims’ haunting musical settings they also serve as Sirens who remind us of the eternal, fatal lure of the water.  Some of the most indelible stage images are theirs.

As for the visual effects—you need to see them to appreciate their artistry, and frankly if I told you about them it might ruin your experience, for they are among the greatest achievements of this production.  At the same time, there are elements in the climax of “Moby Dick” that—however spectacular—struck me as distracting.  Given the rich banquet Catlin has laid out before us, the sudden shift to Expressionist effects for Ahab’s final confrontation seems excessive.  (Others will find this approach quite satisfying, so take my quibble with a grain of salt.)

So my advice, in this most difficult and dark of seasons:  get thee to the wharf, to the Mead Center near the water’s edge in Southwest Washington, D.C., and prepare yourself for a truly amazing voyage.