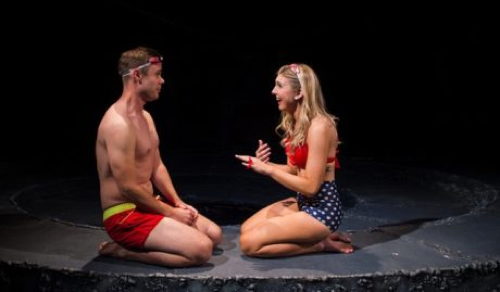 “I’ll give this letter to a worm and hope that it reaches you.” With those words Sarah Ruhl’s Eurydice’s absurd and ancient world is encapsulated. The play is an award-winning modern adaptation of the story of Eurydice, from Ovid’s Metamorphoses, that the New York Times once heralded as a “weird and wonderful new play.” NextStop’s production is equally weird and wonderful.

Eurydice is the wife of Orpheus, the legendary Greek musician, who could make flowers grow and tame the wildest beasts with his music. When she dies, Orpheus goes down into the underworld to bring her back. In this adaptation, she meets her father, and must decide whether she wants to come back to life to live with her husband or if she wants to remain in the underworld with her father. Directed by Jay D. Brock, a professor of Acting and Directing at Catholic University, this play is a work of art, with a stunning cast.

Emily Kester, recently seen in Theater J’s hilarious opener The Last Schwartz, excels as Eurydice. Bubbly and thoughtful, but conflicted, in this story not the wispy heroine but a young woman buffeted between two confusing worlds. Kester masterfully negotiates Eurydice’s moments of defiance throughout the play, creating a smooth arc leading up to her final decision.

…this play is a work of art, with a stunning cast.

Michael Kramer is deeply moving as Eurydice’s Father. A particularly beautiful moment is where he tells her a story about a piano recital where he forgot the piece he was playing. Kramer is an award-winning narrator of audiobooks, and his beautiful voice fits the mournful tones of a man who has long been deceased.

Kiernan McGowan plays the sweet if absent-minded Orpheus, Eurydice’s husband. McGowan is especially brilliant in the moment where he asks himself who he is now without Eurydice.

Co-founder and Artistic Director of Molotov Theatre Group, Alex Zavistovich plays the Nasty Interesting Man and the Lord of the Underworld. His characters are fascinating to watch in a way that makes your stomach turn.

Perhaps the most original of Sarah Ruhl’s characters are The Stones. They serve as an absurd but ominous reminder of mortality: The Loud Stone played by Briana Manente, The Big Stone played by Tamieka Chavis and the Little Stone played by Charlene V. Smith.  Manente, Chavis, and Smith make each stone unique with phenomenal, physical portrayals.

In many ways, this play belongs to the set designer, and JD Madsen takes ownership of the vivid images it concocts. This Hades is cavernous, stony more literal than past productions, who often focus on the modern image of the raining elevator. Madsen’s set is circular like a stone, or a whirlpool and gives the characters a space to physically negotiate their mental obstacles.

Kristina Martin’s Costume Design focuses on two colors: living vibrant red and stone gray. The costumes of the stones are smooth and flowing pieces, that provide an interesting contrast to Eurydice’s precisely cut scarlet dress. Kenny Neal, who recently lent his sound designing expertise to Signature Theatre’s marvelous “The Gulf,” designs the eerie otherworldly music of the play and Catherine Girardi is the lighting designer.

This play is truly a modern Greek tragedy in that it explores the differences and similarities between their view of death and our own. They did not picture a good and a bad place like we do, but a whole other country where people lived just as they did on Earth, but without their former identity or memory. While our underworld is one of flames and eternal suffering, the Greeks is a slow but steady decay of the mind like stones thrown in a river, making waves that eventually vanish into the smooth surface of the water. In this, Ruhl seems to argue, is the more tragic end.

Running Time: 90 minutes with no  intermission.